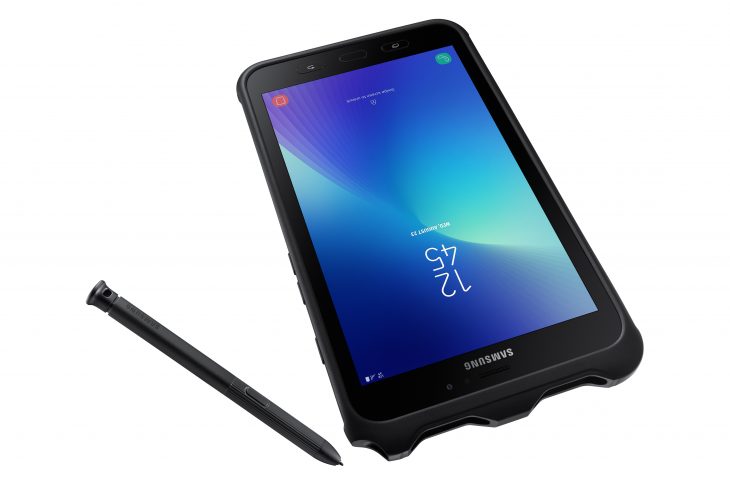 The Galaxy Tab Active2 will provide a high performance experience for the most demanding Australian tablet users and is delivered with a sleek and highly mobile form factor, great connectivity via 4G or WiFi, and the best in Galaxy features like IP68 water resistance, S-Pen, and integration with a range of partner business tools. In addition to a great set of features customers have come to expect from a Galaxy mobile device, the Tab Active2 is also practical for work environments with a 1.2m anti-shock inbox protective cover and display touch mode for gloved and wet touch functionality.

The 8″ tablet is built to military spec – MIL-STD-810G to be exact – making it the perfect companion for the road warrior. An Exynos processor runs the show and is backed up by 3GB of RAM and 16GB of storage which is complemented by a microSD card slot. An 8MP rear camera and 5MP front camera is included, and the tablet comes with a user replaceable 4,450mAh battery.

The tablet includes a front-mounted fingerprint sensor but also supports facial recognition. The included S Pen which is IP68 certified (just like the tablet) offers up to 4096 pressure points making drawing accurate.

Samsung hasn’t announced pricing for the tablet as yet, nor when it will be available beyond ‘October’. If this tablet sounds like something you’d be into keep checking, we’ll update as soon as Samsung Australia gives us more information.

If only the S8 active comes to australia

The Samsung Galaxy TAB Active 2 is really an awesome device for surfing and enjoying the medias. I am glad to hear that it is coming to Australia though I am not from Australia.
Thanks for the post.

I’m desparate for a new 7″ or 8″ tablet, but this one is ugly, and everything else on the market is either old or low spec…any suggestions?