Earlier today we reported that the November security fixes were rolling out to Pixel 2 phones (as well as other Google phones). It is now apparent that within these OTAs and factory images Google has included some fixes for the Pixel 2 XL (and apparently the Pixel 2) display.

The LG-made AMOLED display on the Pixel 2 XL has been the centre of attention of many reviews and complaints about the phone with most complaints centred around the blue shift, the vibrancy of the colours and the potential burn-in of the display. Google have said that they will bring fixes to ameliorate some of these complaints and true to their word have already included some in today’s OTA/factory images.

Under the display colour setting Google have now included a “Saturated” mode which will improve the vibrancy of the colours and although it does improve it does not make the colours as saturated as, for example, The Samsung Note 8. The “Vivid” mode has also now been changed to “Boosted” Google are obviously intent on keeping the colours as close to natural as possible. 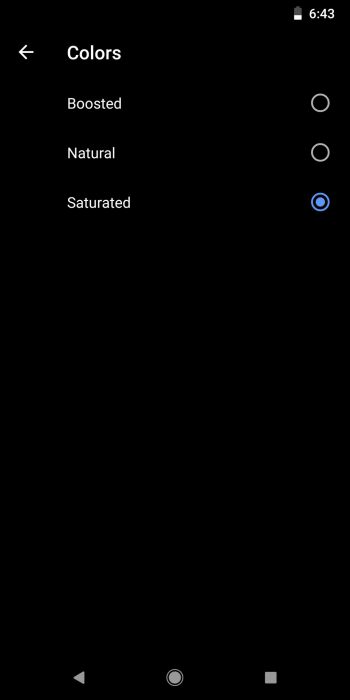 Along with this colour “improvement” Google has also lowered the maximum brightness of the display by 50 nits and enabled the ability of the navigation bar to hide itself when it has not been used for a while. This is to help prevent the screen burn in issues. These fixes had already been included in the 8.1 developer preview but now they are in the stable ROM as well.

Google have also included a fix for the bug that caused the earpiece clicking on the Pixel 2 as well as many Bluetooth and other fixes. For more information head over to the Android Source website and check out all the changes yourself.

Have you received the OTA yet? Have you applied the new changes to your display or are you happy with how it is?

The saturated colour space really points out how great the Pixel 2 screen really is, really glad google listened to feedback on this one.

I ordered my Pixel 2 on 20th Oct but I still haven’t received my phone yet. The website said it’s 20th Nov, so frustrated with Google.

Had the same. Ended up finding a JB Hi Fi that had an XL in stock and cancelled my Google Store order.