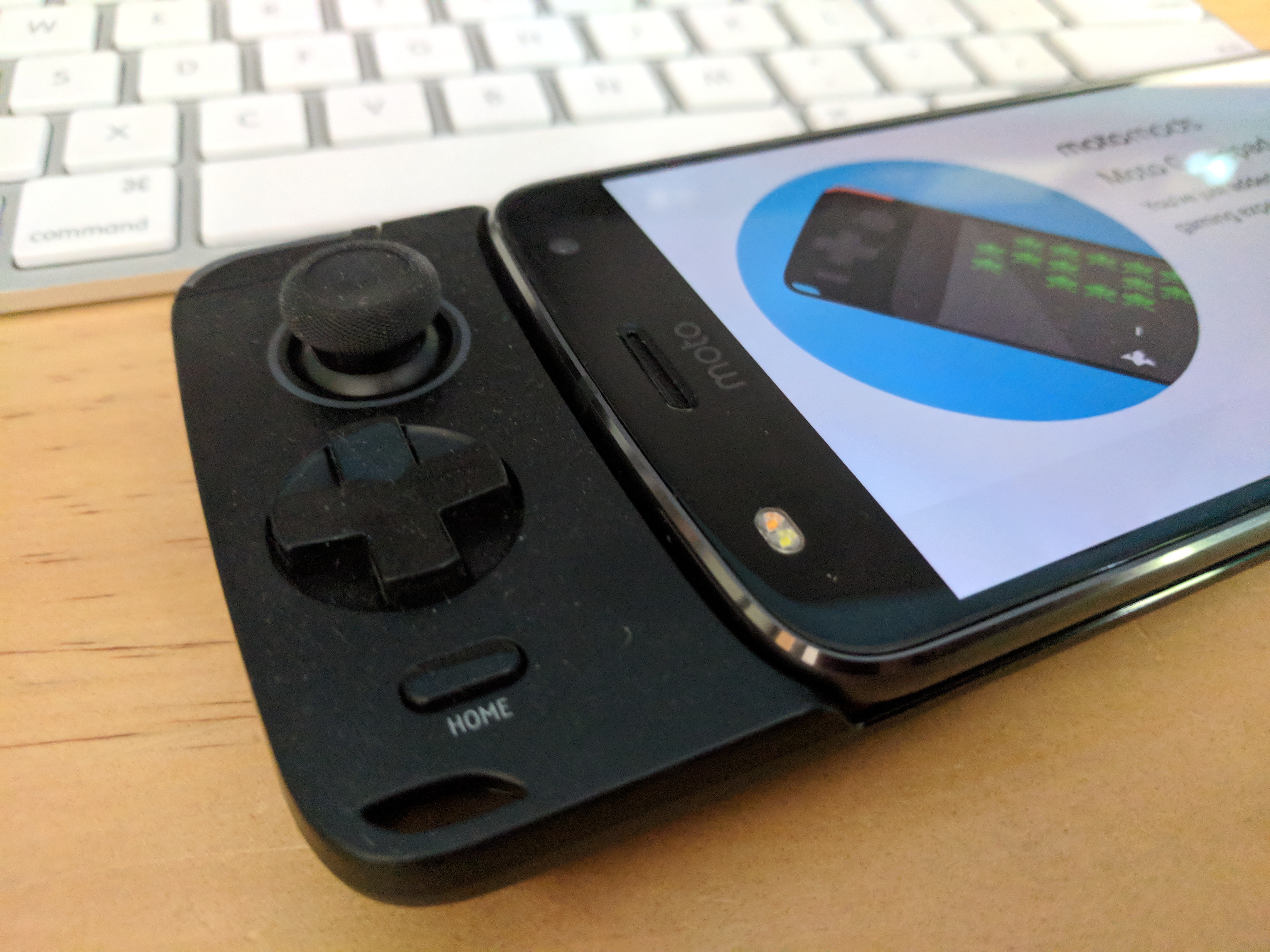 The premise of the Moto Gamepad mod is simple: You insert your compatible phone straight into the gamepad, and it becomes a mobile games console with a similar feel to the Nintendo Switch. Now, there’s some really good points in this and some not so good, which has to be expected when you repurpose a device into another realm.

Ultimately, the Moto Gamepad allows you to enjoy games on a compatible device in a new way, without having to buy a new dedicated gaming system — essentially you’re accessorising, not purchasing more devices. If you’re a commuter, or someone who actually takes lunch breaks at work this could be a really cool way to pass the time. The other major bonus of this setup versus actually purchasing a mobile games console is it won’t cost you $450+ for the privilege, if you keep your eyes out you’ll pick one up for around the $100 mark (nb. for the gamepad only).

If you’re a heavy gamer, the factor that you’ll probably be most aware of is the limited range of decent games in the Play Store. Unlike a purpose-built console, you’re outright limited by what developers choose to bring to the Android platform in terms of games.

Then there’s the power conundrum: your phone has a battery and probably a USB Type C connection these days. The Gamepad has a separate battery (1035mAh) that’s good enough for up to 8 hours of play without needing a charge, so it will more than likely outlive your phone in a gaming session. The Gamepad is charged via microUSB – a minor aggravation if your phone is USB C, but an aggravation all the same. There’s also the fact that if you’re playing games on your phone, you’ll be chewing through your phone battery at a fairly rapid rate so you’ll need to ensure that you have access to power during the day to keep your phone alive.

When it comes to the experience, a single word stands out to me: simplicity.

Connecting the Gamepad to your supported mobile couldn’t be easier and charging the Gamepad is intuitive. Because the connection is physical, the controls are instantly responsive and a genuine pleasure to use on multiple sports style games and a couple of shooters that I got into while reviewing the Gamepad.

It’s a really comfortable piece of kit to hold on to, even for extended periods of time if you’re sitting down for a good game fix. It’s fairly light as well which means you’re going to minimise strain on your wrists along the way if playing heavily.

The design aspects of the controller are really well thought out to suit not only the retro games like Sonic, or Golden Axe with the digital direction pad but also more recent games that require finer, analogue control like some racing sims and War Robots.

The Moto Mods Gamepad is a really happy medium between spending a lot of money on a dedicated handheld game console and just having a touch screen offering available to you. It’s really simple to use and quite cost friendly.

The range of Moto Mods aren’t for everyone – let’s get that on the table to start with. You need a supported device (Check out the list of compatible devices), you have to want the mods they offer but for someone who likes to dabble in tech and enjoy interoperability then you’ll quickly get addicted to checking out what’s new in Moto Mods.

If you’re a hardcore gamer, the restricted range of games available through the Play Store is likely to be the biggest hurdle to adopting the Moto Mods Gamepad as a regular use item. If that’s not a hurdle for you then the Gamepad is going to offer you a new functionality stream for your phone and at a really good price.

For those of you who want a casual gaming experience and are happy with the offerings on the Play Store then the Moto Mods Gamepad is without a doubt for you. I’m keen enough to be looking into what phones are going to meet my needs and are compatible with other Moto Mods.

I wonder if this has any improvement over a standard Android Bluetooth game controller. Also wonder if it works like a standard game controller, so you can use it on HTML5 games, like the one I’m developing http drift.team (shameless self promo :-P).