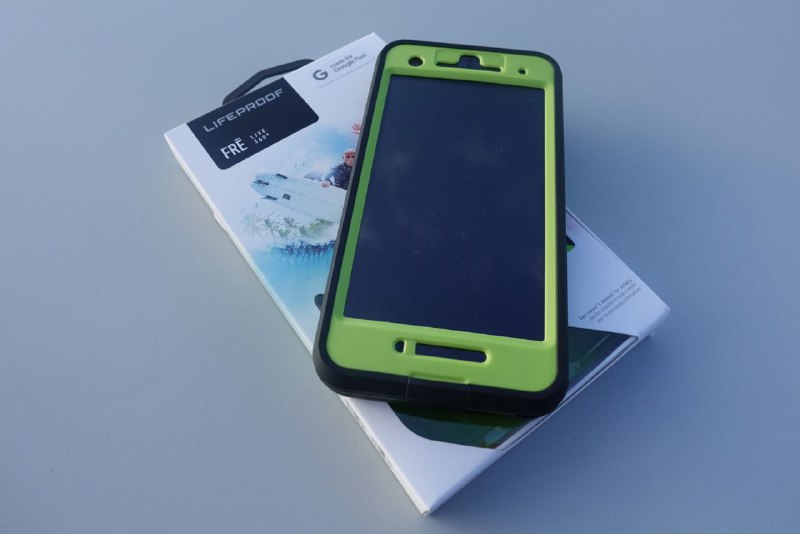 Just last week we told you about Lifeproof’s Fre for Pixel 2, and now we’ve got one to show off for you. The black and lime colour is a bit .. loud .. I guess is my way of describing it, but the familiar, solid feel is very comforting. Unlike some other Lifeproof Fre cases, because the Pixel 2 has no headphone jack, there’s no need for a headphone attachment / accessory which this kind of case has come with in the past.

It’s a simple affair, with a hatch you can open on the bottom to stick in a USB-C cable for charging. The fingerprint sensor works through the film-covered hole in the back, as does the camera and flash. On the front, while there is a film covering the screen, I find it actually adds a level of tactile feel which makes typing faster and more accurate. In past years, this hasn’t been so much the case, and for phones with curved screens — like Samsung’s Galaxy S8 — the gap between the film and the screen can be a bit pronounced at the screen edge. Fortunately, the Pixel 2 screen is nice and flat, meaning there’s an excellent fit here.

Lifeproof have a history of making great cases, and this is no exception. I have a feeling it’ll be on my Pixel 2 for a while yet.

Chris – how do you find the sound quality on these cases – had a few in the past and they have been terrible – muffled voice’s through the speaker and people saying they cant hear me at the other end due to the membrane – are they any good now?

Certainly the quality of the earpiece through the case is fine – you can hear the other party clearly. The microphone remains very sensitive even with the case on, haven’t missed a word or had any muffled sounds when I tried it this morning.