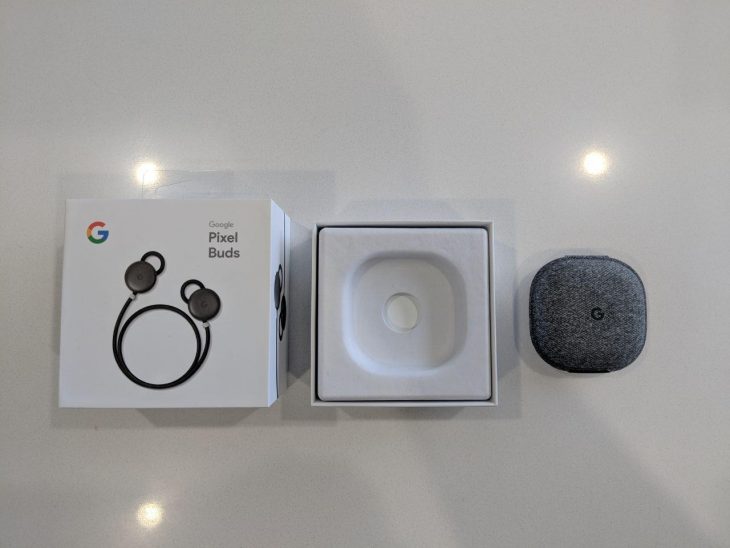 Google’s Pixel Buds are coming to Australia in as little as a couple of weeks, and at $249, they’re not the cheapest headphones going. They do, however, offer a few features that many other headphones don’t, including Google Assistant built in, easy one-touch control, real-time translation, and easy connection. Already the reviews have been published overseas, and if you’ve read some of them, you’ll know that the impressions generally aren’t flattering.

The kinds of commentary made include:

Overall, there’s been some damning critique of the Pixel Buds in the reviews I’ve read thus far, and I wanted to try a pair for myself. Fortunately, Google have review devices in the hands of the Australian press from today, and so I can give you some first impressions tonight.

First of all, some of those things above – they’re true.

What the other reviewers said about Pixel Buds

Walking on the streets of Sydney, though, and they didn’t work so great. I could barely hear them without cranking the volume, and as soon as I went inside from out, my ears started to rattle as the audio was too loud. Because they don’t seal with your ear canal, or cover your ears like more traditional headphones, outside noise gets in, and it can be very, very hard to overcome.

The voice response, when it works, is brilliant. It’s superbly fast, and almost instantly responsive, provided you’re in a fairly quiet environment. The Pixel Buds do have directional microphones in order to hear your voice clearly, and for the most part, this worked equally well inside and out. While the detection of voice outdoors worked just fine, the accuracy of the speech to text was a little impeded. While Assistant understood that I wanted to send a Telegram message to Rachel, it mangled the content of that message pretty badly. Indoors, it was significantly more accurate. It’s noted, though, that this isn’t a flaw peculiar to Pixel Buds; all Google’s voice recognition can be thrown off by loud noise, and as can recognition on other platforms too.

The neck cord is curious, when Apple’s AirPods are completely cordless, but ultimately, I don’t really mind it. I like it, because if you flick the buds out of your ears to talk to someone, the cord will keep the buds around your neck and ready to pop back in. Only a fool would be tempted to cut this cord, but apparently enough tried that Google needed to warn users not to do so. I guess you can’t put brains in statues.

The charging case is equal parts great and frustrating. Because of the way the buds charge inside the case, they need to be very precisely aligned. If the alignment is off even slightly, they won’t charge, and you can be caught by surprise with flat earbuds. The easiest way to make sure the Pixel Buds are charging is (a) to look for the pulsing green LED in the case when they’re correctly seated, and (b) the Bluetooth connection drops while they charge. This is very handy to know, because if you bump the case and it dislodges a bud, they’ll reconnect to your phone, and this will give you an indicator they’re going flat instead of charging.

What I found with the Pixel Buds

This is a first generation product. Unlike tried and tested headphones, these lack a bit of polish. It’s clear that this is Google’s first foray into worn technology like this, but this isn’t entirely a bad thing. When it comes to audio quality and overall utility, I’d choose something else every time. Bose QC35 II’s, for example, which I reviewed a little while ago incorporate Google Assistant and have superb audio quality, which I could barely fault. It’s little surprise I found them brilliant; they’re a fourth generation product in some ways, and though Google Assistant is brand new, most other inclusions are tried, tested, and loved.

There are some signs that the Pixel Buds are a first generation product though, and primarily these centre on limitations:

It’s easy to be critical, but there’s some powerful features too, depending on what version of Android your phone runs:

Instead of a physical button to press on the left ear-cup like on the Bose QC35’s, a simple touch on the right earbud activates and deactivates Google Assistant. This might not sound like much, but it actually makes voice control very easy. It almost makes you look like a secret agent talking into your wrist, but in addition to being sensitive enough to hear you in loud environments, you can talk fairly quietly, and what noise you do make is aptly masked by your wrist. In short, this means you can talk to Pixel Buds without really disturbing people around you, and that’s important.

A Babel Fish this is not, but it wouldn’t take much to make it right, and you’d have to expect Google’s working on it.

I don’t think the Pixel Buds are the entirely negative experience that’s been portrayed elsewhere; while there are flaws, to be sure, I don’t know that they’re critical. There’s a section of the market that will find Pixel Buds very, very appealing.

They’re super light-weight, to the point of barely being able to feel them when they’re on (or is it in?) The audio quality is more than ample in the environments the buds are most likely to be used in — indoors or commuting. Let’s face it, the audio quality is less good walking around in a windy city, but let’s also face it, most of us don’t do that for hours a day.

With a 5-hour battery life, you can easily wear them the whole morning, and charge them over your lunch break and wear them all afternoon if you wanted to. I’ve never really been a headphones-all-day kind of wearer, but plenty are, and they’ll likely not be disappointed.

For my usage pattern, though, the Pixel Buds can’t replace my over-the-ear headphones. For starters, multi-device connectivity is king these days; I can watch my TV on the tablet, get off the train, and switch over to music from my phone without touching the headphones. If I’m watching TV and my phone rings, seamless, the audio cuts over. They also filter out background noise much better, and for me, that’s important.

As a one-size-fits-all solution, the Pixel Buds fail; they are simply not for everyone. As a solution for those who like light-weight almost not there audio, who need to be able to hear whats going on around them (without being distracted by it), and who want the ease of voice control, an (almost) hands-free Assistant, these are hard to beat. Other headphones with Assistant built in are far less intuitive, and while I love the QC35s, wear-all-day headphones — especially in an office environment — they certainly are not.

At $249, Pixel Buds aren’t exactly cheap, but if you want to see what smart wearables will look like in a year or two, this is a great way to get an early sneak peak.

Google’s Pixel Buds are $249, and they’re coming to JB HiFi and Telstra stores in December, and will be available on the Google Store soon.

Coming from using Plantronics BackBeat Go 2’s, I’m a fan of the cord. Especially in an office environment where I’m constantly having to talk to people. Like you mentioned you can just knock them out of your ears and let them dangle whenever you need to

It’s hard for me to decide to get them or not. Most of the reviews are negative, but then the complaints people have are the cord, which I wouldnt mind so if I take them out for a moment I know exactly where they are, and also the fact that they don’t sit all the way in the ear, which with sweating and my need to be aware ofy surroundings I thought would be good, yet I notice everyone else dislikes. That just leaves the dodgy/case charging.

Thanks Chris for your great reviews. After I know Pixel buds can’t connect to two devices at the same time which airpod is good at, I decided to skip this product. Given the price is even $20 more than airpod and missing filtering background noise. Looks like still a beta product. I have Bose 35 2 in use now which is pretty good. I am thinking to buy a small earbud which can put in my pocket. Maybe either airpod or some other truly wireless. Based on series of products Google release this year, I am a bit of disappointed… Read more »

Hi Tony – I have a set on Sony WF1000x in ear lifeless and I am really impressed with them, nowhere as good as my OPPO on ears but a great buy all the same