Jaybird have been making decent exercise headphones for a while now but the Jaybird Run headphones are a different beast. They are Jaybird’s first foray into the true wireless segment of the headphone market, which seems to be welcoming newcomers on a near weekly basis.

I have been very sceptical of this technology for a while now, often wondering firstly how good can the sound really be considering all there is to them is a couple of small buds and secondly how do they manage to stay in the ears, especially while exercising vigorously.

After a not-horrible experience with a cheaper pair recently I was looking forward to checking out a decent brand’s offering. Read on to hear what I thought about the Jaybird Run.

Jaybird have designed the Run headphones with the active and the runners in mind. Their entire launch was focussed around running (they even had runners doing laps of Sydney live to demonstrate them) and how their design allows them to sit comfortably in the ear even with the continuous bouncing associated with running. I suspect this is how they decided on the name for them. /s

The earbuds — yes I will call them earbuds and not headphones for the purpose of this review — are relatively small and are smaller than the earbuds on the Bose SoundSport headphones. This is remarkable considering the lack of a wire connecting each earbud and thus the added technology required inside to connect the two wirelessly.

The size of the earbuds can make them a bit fiddly when removing from the oversized charging pill that they are stored in but if they were bigger they would have needed duct tape to make them stay in the ears.

The charging case/pill provides two full charges for the earbuds and considering the earbuds themselves lasted for four hours and ten minutes on a single charge while playing loud music the entire time (full volume) the total of over 12 hours of playback from a single charge of the charging pill is very impressive. Jaybird have also included a fast charge functionality where just five minutes of charging provides a full hour of play time. In testing I found this to be very accurate.

The size of the charging case is a drawback. It is not thin, nor is it short. If you wear skinny jeans this won’t fit in them but for me it was not an issue. It would have been a trade off for Jaybird and I suspect they made the case to the exact size that gave two full charges. The case is a solid, smooth pill though so if you do put it in your pocket it will sit comfortably and not dig into you with any acute edges.

As you would expect with headphones designed for exercising, the earbuds are sweat proof and water resistant. I did not test out the water resistant part but definitely did the sweat-proofing test. They passed. They still worked, even with my manky, sweaty ear wax infesting them after a decent workout.

This is where the Jaybird Run headphones excel. Straight out of the box they slotted into the ear and felt comfortable and secure, and this was before I’d tested out the different tip and fin options. For the record the options were: 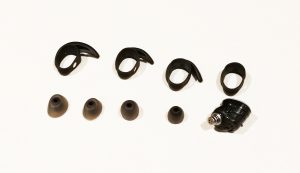 Each fin option has a different sized fin and I ended up changing to a smaller fin. I was hesitant at first as the earbuds felt so comfortable I could barely feel them in the ear — surely that would mean they would fall out? Nope. No matter how much I ran, bounced around, banged my head, I was unable to dislodge them, although I could barely feel them there. If you are a bit more paranoid than me there is the option to go bigger with the fin so it feels more secure to you.

This near-perfect fit meant that they stayed within the ear canal as far as they were meant to. The lack of noise cancelling was not a concern at any time. Even while flying on a plane I had no issues hearing them perfectly with very little, if any, outside interruptions. The outside noise was so limited that I forgot to focus on it until the end of the flight.

How did they sound?

Surprisingly, for such a small package, they sounded really good. Compared with the cheaper true wireless earbuds I tested the difference was night and day. The Run sounded much better. The bass was much deeper and the richness and range of sounds produced was much better. They rivalled the Bose SoundSport I had been using previously. The Bose have a deeper bass but did not go as loud as the Jaybirds. The Jaybirds seemed to have a better high end, although maybe it was the fact that their higher end was louder. Either way the Jaybirds produced a high quality sound.

One of the best things about the Jaybird Run overall package is the ability to easily change the sound the earbuds produce through their app. The app provides pre-installed equaliser presets as well as a large selection of presets from the Jaybird user community, each categorised into the type of music it is designed for. If you still cannot find something that suits your ears and listening preferences you can manually alter the equaliser yourself and save it as a preset.

Not only does the app give you the opportunity to alter the sound profile but also tells you the charge left in each earbud in a percentage. I imagine this could be very handy but I did not rely on it much as my workouts last an hour or so and thus the earbuds never entered into the nearly-empty category.

What about the connectivity?

The connectivity issue I had was between each earbud, but even then it is nitpicking to say it was a major issue. Occasionally there was possibly interference between the two earbuds and one would drop out. This happened at about the same frequency as the phone dropouts but for this connectivity issue it took a few seconds for the left earbud to sync back with the right one and continue playing music (the right earbud is the master and the left the slave). A few times I had to restart the earbuds entirely to get them to re-pair to each other but considering how often I used them and how often it happened I considered this issue minor.

The earbuds were also surprisingly good for phone calls with clear voice on both ends with basic phone call control functionality.

The earbuds are designed with a single button on the side of them. This button has limited functionality. By default, using the button on the right earbud you can answer/end calls and make calls along with play and pause the music. The left button is used to call Google Assistant. There is an alternative button action where the buttons can be changed to change the volume up with the right earbud and down with the left. This results in the inability to play or pause songs nor be able to call for Google Assistant.

I was able to tell Google Assistant to turn the earbuds up but think about how loudly you talk when you have headphones on, do you want to be yelling that to all and sundry around you? There is no way to skip songs in any configuration. Interestingly without changing the default button actions to the alternative actions the volume of the earbuds was quite low. After changing the actions I was able to turn the volume of the earbuds up much higher.

Wires are missing and that is a good thing. I was sceptical but I’ve been reborn. I didn’t think you could get decent, possibly high quality, sound from earbuds with no wires. I was wrong. I suspected a comfortable fit would mean they would fall out and not be secure in the ear. I was wrong.

Would I recommend them?

I would and I have. While not cheap you get what you pay for.

The fit is second to none in my experience with so many options to choose from even Dan could find a combination to fit his weirdly-shaped earholes. The sound is great and rivals some of my high end “wired” Bluetooth headphones. The sound can be further improved with the equaliser built into their app.

The connectivity had some minor issues at times and was not perfect but didn’t retract from the overall experience. The connection with the phone was consistent but there were occasions with connectivity issues between the two earbuds but these occasions were rare.

The Jaybird Run true wireless headphones converted me into a believer in the true wireless segment of the market. If you are looking for an extremely comfortable earbud with a very decent sound quality I can recommend these to you without a doubt. The Jaybird Run can be purchased for a RRP of $250 from the Jaybird website or from wherever good headphones are sold.

Not really a fitness-focused product if they don’t have heart rate monitoring. I’d rather drop an extra $50 and get the Jabra Elites.

The jabra do have more button controls too

Great review thanks, and good to know? I’ve got the Jaybird bluetooth, um, wired earbuds (false wireless?) and the fit and sound are great, but that pesky wire does pull when you turn your head