One good thing with the Pixel phones bought directly from Google (and other places in Australia) is that the bootloader can be unlocked for users to tinker with the software as they see fit. This is 2017 though and it seems that Google can’t take a break with these Pixel 2 phones: there are now reports of some Pixel 2 bootloaders that should be able to be unlocked not having that option available.

In the States Google allow Verizon to lock down the bootloaders on Google’s Pixel 2 phones Verizon sell. Of course that is their prerogative and people do not have to buy from Verizon. For those who want the option to unlock their bootloader there is always the ability to purchase the phone unlocked and bootloader unlockable from the Play Store.

Unfortunately there are now reports that some phones are arriving with the slider that allows the bootloader to be unlocked “greyed” out and unable to be slid across to allow “OEM unlocking”. It seems that this is relatively widespread with 65 people already starring it on the Google Issue Tracker. There appears to be only one thing in common between all of these Pixel 2 unlockable phones — they were purchased from the Play Store from Google.

Reports are of SIM cards from Verizon, T-Mobile so it is not the phone registering a Verizon SIM and making the bootloader unlockable. After many calls to Google’s customer support they have replied to a few users although most are getting the “take a bug report and we’ll investigate and get back to you” message. Some have managed to get a new device via RMA but of course, anyone who has called Google support before will know that this is very random and depends entirely on who you get as your support person. One person has received a reply from Google via email and Google stated that they do not have a solution at this time but are investigating. 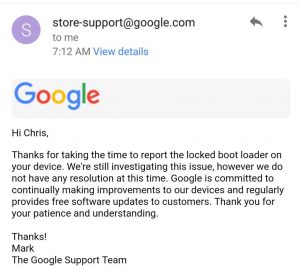 The Google Issue Tracker thread is full of reports of this occurring and it seems at this stage the only solution is to convince the customer support person to give you a new phone.

Here at Ausdroid we have tested it on the two Pixel 2 phones we have an the bootloader is unlockable on both of these (see below) so we are now speculating that someone at HTC mixed up Verizon Pixel 2 phones with Play Store Pixel 2 phones when they were shipping the phones to the warehouse. Note that this is only occurring on the HTC-made Pixel 2, not the Pixel 2 XL made by LG.

Our advice to you is that if you purchase a Pixel 2 check the unlockable nature of the bootloader by first enabling developer options by tapping on the build number (in about phone under system in the Settings app) seven times then entering developer options — inside here the slider and option for OEM Unlocking should NOT be greyed out. If you ever want to, or suspect you may want to, unlock the bootloader check this early on in the lifespan of your phone.

Do you own a Pixel 2? Check the OEM Unlocking options and let us know what yours says in the comments below.