Home Mobiles The Huawei Mate 10 (and Pro) really is a computer in your... Motorola did it with the Atrix all those years ago. Samsung did it better with their DeX accessory but that required the additional purchase of a dock on top of the already expensive phone. Huawei have gone a step further and have introduced a desktop mode that does not require a separate, and expensive, dock purchase to enable a desktop mode.

For the last couple of weeks I have been fortunate enough to spend time with Huawei’s latest and greatest flagship, the Mate 10 Pro. As part of the review I have been testing all the new functionality Huawei have packed into their new smartphone. One such feature is “Projection” mode where the phone is projected onto a monitor/TV.

Beginning with an expensive Dell DA200 USB-C adapter, I didn’t have any luck. Luckily I had a cheap eBay HDMI adapter/hub and lo and behold, plugged in the HDMI cable from my monitor to it and the USB-C end to the Mate 10 Pro and up comes the Huawei EMUI desktop mode.

So what is projection/desktop mode? Huawei showed this off during their Mate 10 announcement in Berlin. Projection or desktop mode is a basic mode from Huawei that has a few apps (or is it programs now that we are in desktop mode?) specifically for this mode which can be used. One of them is Chrome. For this reason you can essentially use desktop mode as a Chromebook type of computer (without extensions).

Can you run other apps?

You can run seemingly just about any program that is on your phone. There is a button located where Windows put their orb in the lower left hand corner of the display. Within here are all the apps on your phone, which you can then run.

For apps that do not run very well in desktop more you can switch to phone mode and the phone’s display is projected onto the monitor. This worked for not just games such as Riptide GP but also NFL Gamepass although NFL Gamepass ran perfectly in desktop mode. The desktop mode seems to run it in the same format that it does on a tablet. 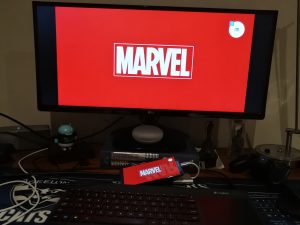 There will be some of you asking regarding the compatibility Microsoft Word. The online version runs as does the app but unfortunately these versions are very limited (although I must admit that I have not used the full paid online version). It seems an opportunity missed for Microsoft. They have given up on their own mobile phones to focus on software. To partner with Huawei on this and have a full version of Office running in desktop mode would have made them VERY relevant in the mobile space again. For those who want the basic functionality, Google Docs worked within Chrome. Any Bluetooth peripheral device that can be paired with the phone can be used with Huawei’s desktop mode. I paired my Logitech MX Master mouse and my Logitech K380 Bluetooth keyboard to the phone for some productivity usage but for more fun I paired my Asus Gamepad controller with the Mate 10 Pro and had full usage within games – with zero lag.

For those who do not have a Bluetooth keyboard and mouse handy there is a trackpad and keyboard built into the desktop mode on the Mate 10 that allows you to control the input/mouse pointer on the desktop. This worked surprisingly well and was easy to type, after all we do tend to use the keyboards on our phones fairly often so should be fairly swift with typing on them. How does it compare to Samsung’s DeX?

Samsung released their desktop mode with the Galaxy S8 earlier this year and by all accounts it has not been very successful. The expensive dock (DeX) and reliance on peripheral hardware such as a keyboard and mouse seemed to kill any chance it may have had. Once the Samsung phone is plugged in you can no longer use the phone.

Unlike Samsung’s DeX solution the Huawei Mate 10 Pro can be used in its entirety while in desktop mode. I was still able to send and receive messages, make phone calls and when I received messages they did not interfere with the display on the monitor.

On the other hand, Huawei’s solution is easy, elegant and cheap. It requires a simple USB-C to HDMI cable/adapter (and I have shown it can be a cheap $10 eBay one) and a monitor/TV. You do not even need a keyboard or mouse. When the phone is in desktop mode the phone can still be used and it has a touchpad and keyboard display for input into the desktop mode. I was also able to switch back and forth from desktop to phone mode to play different apps, something that DeX cannot do. But when will I use it?

While it is unlikely anyone would use this routinely it is a great option to have. Anywhere you are near a TV or monitor with a HDMI connection you can plug in your USB-C to HDMI cable to it and project onto it. A hotel room to watch a movie on your phone, at work to surf the web properly in a desktop mode (should your work lock down their firewall — don’t get caught), or when you are away from home (hotel room again) and need to quickly work on a desktop PC to get some work done but do not have a PC or laptop with you — you do not HAVE to have a keyboard and mouse with you, it’s just easier if you do.

The next logical step is for a company to introduce a full projection of a ChromeOS when plugged in. Andromeda anyone?

1.Is that possible to paired two Bluetooth device and functioning? Im planning to buy Bluetooth Keyboard and Bluetooth mouse.
2.Can wireless mouse/keyboard (using dongle like notebook) work with Huawei Mate 10?

Did you try an rdp client to access a full Windows desktop?

It seems Huawei is kinda getting the upper hand onto Samsung these days… This Huawei 10 Pro is great. I am backering some lapdock which is compatible with both Huawei and Samsung, using DisplayPort. It is called the Mirabook from Miraxess and it is look promising 🙂 https://miraxess.com/android-phone-laptop/

Can u create SMS etc off the desktop mode using to screen. I see this as being handy in a business situation.

Was unable to get this one going… Not in desktop mode anyway. Phone projection mode yes

Can you use it to project Netflix onto your tv?

Yes. Only on phone projection not in desktop mode. The desktop mode runs the app but the video won’t play. Phone mode works though.

Updated post with pic of Netflix running in phone mode.. Iron first or punisher I think it was.

Thanks for looking into that, looking forward to the review.