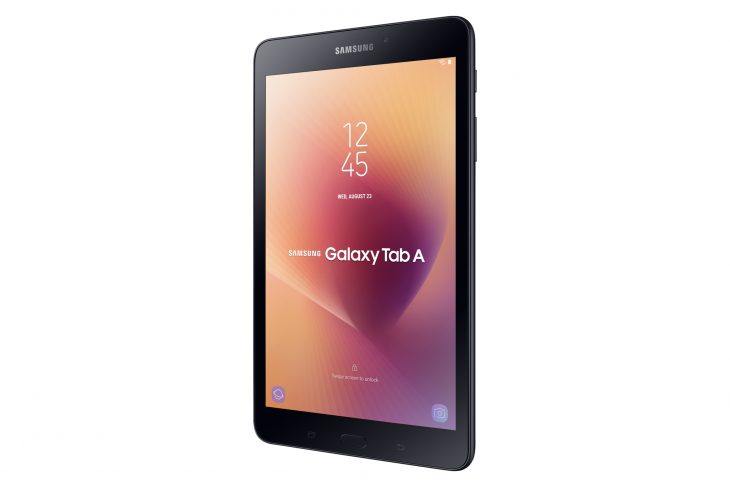 Samsung Australia has today announced that the Galaxy Tab A 8″ is now available to purchase in Australia, with both Wi-Fi and 4G models available.

The tablet is a versatile, well-sized unit suitable for the entire family with a refined look and metallic body with rounded edges that’s comfortable to hold. A long life battery that lasts up to 14 hours and beautiful display makes it a good media consumption device for a long trip, or for perusing the news on the couch.

Hardware wise, the tablet comes with a bright 480nits HD resolution 8″ display though only comes with 2GB of RAM and 16GB of on-board storage though it is expandable with microSD cards.
Specs:

The tablet comes with support for Samsung’s Bixby assistant – though there doesn’t seem to be a dedicated Bixby button on the side. A three month YouTube Red trial is included, and a Kids mode comes with a value pack of video content and games which includes LEGO Batman: Beyond Gotham, LEGO Ninjago: Shadow of Ronin, Toca Hair Salon 3 and BRIO World – Railway.

Wi-Fi and 4G models are now available in black from Samsung-branded retail stores, the Samsung Online Store, and JB Hi-Fi, Harvey Norman, The Good Guys, Officeworks and, Bing Lee. The black 4G model is currently available from Vodafone & Optus. Telstra is due to launch black and silver 4G models from 26 December 2017. The Wi-Fi Galaxy Tab A 8.0 has an RRP of $329, and the 4G Galaxy Tab A 8.0 has an RRP of $479.

Garry McGregor, Director, IT and Mobile, Samsung Electronics Australia said of the tablet:

At Samsung, we want Australians to have choice when it comes to the technology they use, and ensure it meets their unique needs. The Galaxy Tab A 8.0 is designed for the whole family. It’s the tablet that’s easy to use whether you’re out and about or curled up on the couch, with long-lasting battery life to get everyone through the day.

If you’re naughty Santa will put one of these under your tree. Sorry.

Seriously though, if you’re comfortable with buying from Amazon US, they will deliver to you an Asus Flip C101 for about the same money. You’ll be getting an Android tablet with much more power and performance. You’re also getting a sleek aluminium Chromebook which will get updated regularly by Google. There’s no reason why the right person couldn’t get 4 or 5 years of enjoyable use out of it.