Google is very interested in helping you access the internet, but with limited data inclusions for mobile, sometimes that means restricting apps from getting it, so they launched Datally.

Datally is a new app from Google that will track your data usage, as well as restrict apps from accessing data easily on an app by app basis. It can also find nearby free Wi-Fi for you to use. More succinctly, Google says Datally does three things:

Understand your data. See your usage on a hourly, daily, weekly or monthly basis and get personalized recommendations for how you can save more.

Control your data. Turn on the Data Saver bubble to block background data usage and track real-time data usage while using each of your apps—it’s like a speedometer for your data. You can also block data with one tap if an app’s data usage gets out of control.

Save your data. Sometimes you just need a little more than what you’ve got on your data plan. Datally will tell you if you’re near public Wi-Fi and help you connect. Once you’re done, don’t forget to rate the network quality to help other users.

The app is available on Google Play for free for devices running Android 5.0 and above.

It was tested in the Philippines initially and after a brief play I can say that Datally works pretty well. There are a number of permissions required to use the app that you’ll be asked to turn on, but it finds the data usage for apps you’re using and displays it a clean simple interface.

The main screen displays your data usage, including the apps consuming the most amounts of data. Once you turn Data Saver on, the ability to then lock those apps individually from using data is easy.

The Free Wi-Fi finder was similarly good, finding nearby hotspots, but completely missed the CBR Free Wifi hotspots that operate around the ACT. There is no warning about using a VPN on these free Wi-Fi hotspots either, something everyone should do when connecting to these hotspots.

Google isn’t finished with the app yet either advising that new features including Balance checking and balance expiration reminders as well as Proactive data usage warnings and controls will be tested in selected markets.

To try it out for yourself, head over and grab it from Google Play now. 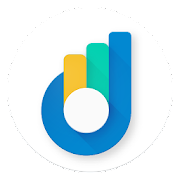 now if they could just do the same thing for battery usage..