Today Australians can buy Huawei’s new flagship, the Mate 10 Pro and to celebrate we thought we’d show it being dismantled! The teardown experts Ifixit posted their findings on the Huawei Mate 10 Pro a couple of days ago and they found it not so easy to pull apart.

At the end of every teardown Ifixit give the device a score based on how hard it was to pull apart, assuming that to repair a device the repairer is going to have to go through the same steps. The Mate 10 Pro scored a below average 4 out of 10 for repairability. Based on this I would recommend you do not break your Mate 10 Pro as it is would be very difficult to fix – at least by yourself.

Ifixit found the rear cover easy to remove and once removed found many liquid indicators. For a phone with an IP67 rating it is strange that so many indicators were included.

Underneath the cover is a big metal shield protecting the valuables such as the Kirin 970 CPU along with rubber gaskets/seals protecting all of the ports including the USB-C port and sim card slot.– even the sim eject hole has it’s own rubber gasket.

The display also cannot be replaced without removing “almost every component” which will add to not just the cost but also the difficulty on repairing a broken display. 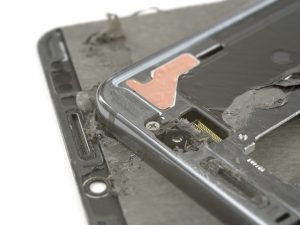 Therein lies the dilemma: the Huawei Mate 10 Pro is possibly the best looking device I have ever seen but it’s below average repairability means that any repair could be costly and time-consuming. Do you keep it unmasked and naked so everyone can see it in all of it’s glory or do you stick a case on it — even the clear one from Huawei hides the beautiful casing — and protect it from accidental damage?

I would not dare use any of the modern pretty but delicate devices without some sort of case , despite some companies claiming their devices to be tuffer than all the rest , we well know the truth is that if any of them land the wrong way on something hard , it is more than likely going to be a trip to repair shop for more than likely some very expensive repairs unless you get a manufacturer free once off repair ………. which are few and far between , and even then there is no gaurantee that a repair… Read more »