OnePlus have pulled a real coup with their new partnership with LucasFilms with the OnePlus 5T Star Wars Limited Edition. The limited edition OnePlus 5T has been rumoured for a while and at a Comic Con in India over the weekend was partially revealed. The Indian OnePlus website has now revealed the details for the launch event, and not surprisingly it is the day before the Last Jedi release. 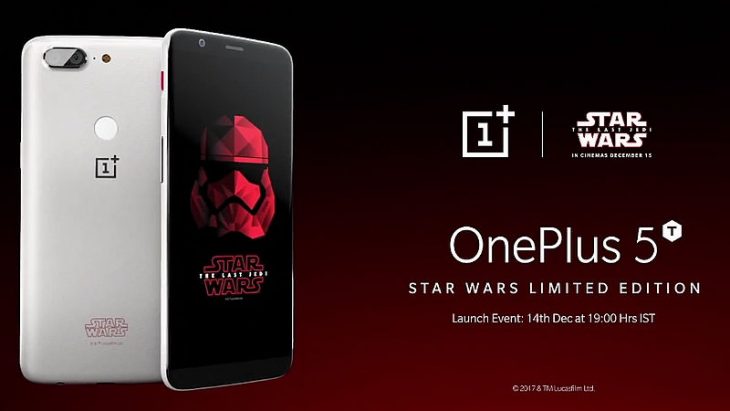 The website reveals that the OnePlus 5T will be launching on the 14th December at Carnival Cinemax Wadala in Mumbai at 7pm. In true OnePlus fashion, anyone can go — all you have to do it cough up the Rs. 999 to get in. Not only does that get you in to watch the event but you get an official Star Wars T-shirt (worth Rs.999), a OnePlus Star Wars Laptop bag (worth Rs.1999) and a hands-on with the new phone after the event.

Ticket sales for the launch event begin at 10am on December 7th, IST and with such a sought-after event you would imagine they would go quickly. Our Indian friends had better get in quick if they are interested in attending. The special edition OnePlus 5T will go on sale at Amazon.in, OnePlusStore.in, and OnePlus experience zones in Bengaluru, and Noida from December 15, the same day the movie is released. At this stage there is no word on whether this will be an Indian exclusive although unfortunately it seems it will be given there has been no word elsewhere in the world. We have also read an unsubstantiated rumour that only 15,000 units will be produced which seems a bit small for something that will sell a lot of units — you would hope that OnePlus add a zero or two to that amount to give more fans a chance to own one.

***Update*** TechRadar have received a statement from a OnePlus spokesperson who said that “It won’t be making it over to the UK or North America regions I’m afraid. Just India for the time being.” Last time I looked we weren’t in either of those regions so fingers still crossed for Australia.

For those who are unsure about whether they want one of these phones check out the video below and then tell me you DON’T want one:

At this stage there is no details regarding the specs of this phone nor the price but it may well be time to start hitting up all your Indian friends and sources for this phone. I know I am.

Why, today all of smartphone use dual cameras heeee like iphone

maybe next year will be different. Google have shown that you don’t need 2 cameras to have the best smartphone camera around

Hell yeah, I want one