Each December everyone comes up with their favourites at the end of the year. So far we have seen some lists already appear on Ausdroid but I didn’t agree with some of them so I decided to write my own with some help of some other Ausdroiders. You can agree with me or you can be wrong but read on and let me know what you think of my choices below.

2017 has been the year of the digital assistant with it now becoming everyday use in many households, through the Google Home and Google Home Mini, especially now that they are priced such that they are close to an impulse buy or a stocking stuffer.

Our best speaker is the Google Home although we feel that the Mini will be the one that brings Google Assistant to the masses — at a tick over $50 its tough to go past a mini, especially when some supermarkets are giving them away just for shopping with them. The Google Home, although it is not the greatest loud speaker, its Google Assistant integration is extremely useful especially in the connected home. Other companies have launched their own smart speakers such as Sonos, Sony and JBL but without trying two out of three of these we cannot offer a decent opinion. Given more time it might be a different choice but as it currently stands the Google Home is tried and tested and priced just right.

Sonos came out with their own smart speaker, the Sonos One, and it sounded amazing but unfortunately launched with Alexa (at that stage and still currently not optimised, nor fully functional in Australia) but with Google Assistant integration coming in 2018 it will be a challenger for the throne. The Sonos One is priced at two and half times the Google Home so is unlikely to tempt the average Aussie unless they have already bought into the Sonos ecosystem (which I now have — they sound that good).

One thing we get to test a lot of here at Ausdroid are headphones. For every high end set I tried the sound was great but sound is a very individual thing according to music tastes etc. You cannot go wrong with any high end headset be it Bose, Klipsch (I did love the Klipsch Reference over the ear headphones which I reviewed earlier this year) or Sony etc. A special mention here to the Plantronics Backbeat FIT 505 which at under $150 can offer a really high quality sound in a comfortable, sweat-proof fit without breaking the bank.

2017 was the year when true wireless became popular with nearly every manufacturer bringing out their own version. I was sceptical that they would stay in my earholes but they did, and were surprisingly comfortable. Although I liked the Jaybird Run and they are super comfortable to use they lacked the functionality that the Jabra Elite Sport and as such the Jabra Wireless Elite are my choice for true wireless headphone of the year. On sale this week for under $250 the Jabra Elite Sport are great value. They sound great, fit great and have amazing functionality for something so small. Jabra have a real winner here for a 2017 headphone — it will be interesting to see what the next generation of true wireless headphones brings.

Smart homes are here and they are going strong. There are so many smart home devices we tested out his year that it is difficult to nail down just one winner.

We had the TP Link Smart Switch, which so many of us here at Ausdroid have now gone out and purchased, the Belkin Maker which allowed Duncan to add Google Assistant control to his garage door, Philips Hue Lights, Ring doorbell and other Ring cameras, Nest cameras and Chromecasts of all varieties. With smart digital assistants taking off the ability to integrate casting media to a device cannot be underestimated– is it really possible that Google planned this? Everything is falling into place seamlessly now — who would have thought?

Hard to choose a winner so I think that anyone who bought a smart home accessory this year is a winner. Let us know what you bought and if you think it’s any good. For low end we are looking at phones under $300 and for the last few years the manufacturer that keeps popping up when we mention these is Motorola — and it would be remiss of us to not mention them again. Once again they have produced some great phones at very competitive prices. Their two main performers in this category were the Moto C and the Moto E4. While the Moto C is a great little phone at just $150 it was bested by the Moto E4 in our opinion. The build of the phone is solid and combined with their near-stock Android OS it runs smoothly and responds to whatever you want it to. Other manufacturers should look at what Motorola are able to produce with lower end hardware and barebones software. The user experience is a great on indeed, something that is less expected on a low end phone. Chris’ review agreed with this choice.

Too many low-end phones are ultimately let down by the software, degrading the user experience when the low-end hardware is unable to push the resource hungry skins at a decent speed.

This category is for phones less than $700 and for me, even though one of my colleagues here voted for the Moto G5s Plus I cannot go past the OnePlus 5 (he went the Moto G5s because the OP5 is no longer available here). For the first time OnePlus sold their phone directly into Australia and this is how it and not the OnePlus 5T qualified for the best mid-range phone in Australia. I cannot find enough superlatives to describe how good the OnePlus 5 is. When I reviewed the OP5 I gave it a glowing recommendation to anyone looking for a high end phone at a mid-range price. I have since shared it around with other Ausdroiders and after using it they too shared my opinion. The only way I thought it could be improved would be with a 2K display that had an 18:9 aspect ratio. OnePlus fixed one of those with the OP5T and if it was shipped here would have taken the prize in this category.

Once again the winning phone was bereft of a heavy skin imposed by manufacturers on the Android framework that ultimately does the opposite of what it is intended to do — degrades rather than improves the user experience.

Here is where I get controversial, and I am sure many of you will disagree with me — as do the other Ausdroiders, but well, I’m writing this so in the end one opinion matters more than all others, mine. Too bad suckers.

I cancelled my pre-order for a Google Pixel 2 XL when I read about all the blogs complaining about issues with the Pixel 2 XL. The display is sub-par they said. Then when Chris went and purchased a Google Pixel 2 it left the Pixel 2 XL review unit free so I grabbed it for a chance to see what these blogs were on about — some did say that it was much ado about nothing, as did Chris. 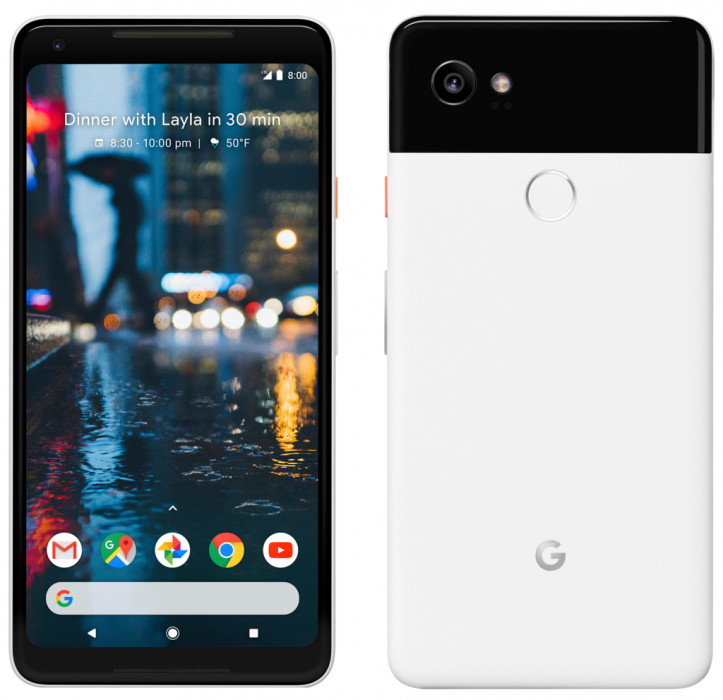 I agree with him. Sure the display is slightly blue when not looking directly at it but it is only noticeable when the display is bright white. In everyday use it is not noticeable, at all. It sits comfortably in the hand and the curved display makes it a pleasure to use.

The software experience on the Pixel 2 cannot be beat but unfortunately the Pixel 2 (this was the other Ausdroiders’ choice but I cannot get past the design) is far too bezelicious for my liking and looks like something from 2015. This is the year of 18:9 displays and once you have used one you will know what I mean which is why the Pixel 2 XL sits comfortably as my phone of the year.

You think you can go without the Pixel software until you switch to it from another manufacturer running what you thought was a minimal skin and that’s when you notice the difference. The Pixel software is how Android should be and once you experience it it is difficult to go back to anything else.

This all before mentioning the camera. The Pixel 2 XL camera is the best smartphone camera bar none. By all accounts, nothing comes close (I haven’t used every single phone out there so I can’t comment on them all).

How many owners of the Pixel 2 XL do you hear complaining? Very few, if any. It is all too often the users who have checked them out instore with the white Google demo screen, or people who have read it on the Internet. FUD IMO. I will be going out and buying one of these when Google ask for this one back.

The Pixel 2 XL is my favorite phone ever. It's such a relief to come back to it after reviewing something else. pic.twitter.com/CfjJqphNuA

For some the price is unattainable, or just not worth the spend, but if money is no object and you want the best phone out there, this is it.

While my list may not be the same as yours it is exactly that, my list. You can agree or disagree. Why don’t you let me know what tops your list for 2017? Convince me.

Good write up Scott. My best phone for 2017 is the Pixel 2. Sure the bezels are ridiculous for a phone released in 2017 but the smaller size and features it packs make it a pocket rocket. After switching from to a G6 from the OG Pixel 5-inch its great to be back on stock android which is lighting fast compared to other software skins and the camera is also fast to capture those moments that pop up without much notice. I think the Note 8 is probably a close second and maybe the Pixel 2 XL third only as… Read more »

I’d say the 2017 winner for home automation is smart bulb manufacturers and the loser is us, as Australians wanting home automation have no choice but to pay a ridiculous price per bulb. We’ve been moved to the print cartridge business model and we’re actually celebrating it. A far more cost-effective and appropriate solution for most home owners would be smart light switches, but these are almost nonexistent in the Australian market – what few options we had from WeMo and TP Link are strangely no longer sold in Australia. Would be good to see more coverage of this on… Read more »

I agree. Have you tried Yeelight bulbs, LEDs and other Mi smart products? I have a couple of bulbs and three security webcams which work really well at a more affordable price. Dan did a post on Yeelight bulbs a little while ago.
https://ausdroid.net/2017/09/15/xiaomi-mi-yeelight-quick-look-integration-google-home/

I did see that, unfortunately we use ceiling spotlights for most of our downstairs with 3 LED bulbs per fitting so individual smart bulbs would be terrifically expensive and not cost effective. Most people with multiple bulb fittings have no interest in controlling each bulb individually, which is why smart switches are sorely needed in this country.