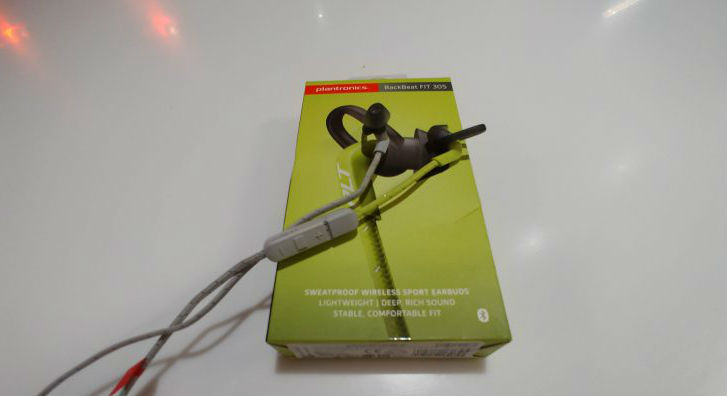 I’ve been checking out all the sports earphones this year in a bid to find the best. I took quite a shine to the over-ear BackBeat Fit model earlier this year, but Plantronics have come up with another in the BackBeat FIT range, the BackBeat 305s, with this model aimed at plugging into your ears.

Priced at a more moderate $129.95AUD from JB Hi-Fi, Harvey Norman, Rebel Sport and Officeworks, they’re a lightweight sports focused set of earphone that’s easy on the wallet, but are they easy on the ears? I used the BackBeat FIT 305s for a few weeks to find out.

What’s in the Box? As usual there’s not much in the box, you get the BackBeat FIT 305 earphones wrapped around a cardboard inner with a cardboard sleeve. The sleeve contains your paperwork which includes Safety Declaration, warranty information and a Quick Start guide, you also get a soft drawstring bag containing a ziplock bag that has two differently sized rubber eartips. You also get a short microUSB cable so you can charge it.

The earphones have the mid-size eartips already fitted, but the drawstring bags has a slightly larger pair and a slightly smaller pair. Unlike other models of earphones, the wings and earbuds are one-piece. It’s a different way to do it, but it works. It may not work for everyone, but definitely did for me.

The BackBeat FIT 305s are pretty basic, there’s two earbuds which contain 6mm drivers covered in eartips with wings in those three sizes. The earbuds are sweatproof with an IPX5 water resistant rating. Plantronics says this is a “military-grade” nano-coating designed to protect them from both sweat and rain. I certainly sweat a lot at the gym and on the cross-trainer, and the earbuds stayed in my ears quite well. I had no issues finding a good fit and a literal test run found them to be quite comfortable (and stable) while jogging along.

A couple of inches from the right earbud on the cable is an inline controller that contains a microUSB charging port (and presumably the battery), as well as buttons for powering the earphones on or off as well as controlling music (play/pause, skip) and calling Google Assistant, Cortana or even Siri if you’re connecting them to an iPhone. The inline controller also contains a wide-band microphone for taking calls or communicating with those virtual assistants.

The earbuds are connected with a braided low friction cloth cable which includes a clip to keep it away from your neck while exercising. The braided cable is very good quality, adding to a premium feel to a fairly decently priced set of earphones. The braided cable can be a little hard to get into the right position as it’s a little stiff, but it’s not overly difficult.

The clip is 100% necessary for using the earphones comfortably. Left unclipped, the inline controller swings around and can almost pull the rubberised earbuds out of your ears. It’s also a heck of a lot more comfortable to have the cord clipped up behind your head as the braided cable gets a bit scratchy on your back if you have a singlet or no shirt on (there’s an image, here’s some brain bleach).

The clip is a little flimsy, but it’s not a major issue Plantronics say, so rest assured you should have no issues here.

I reviewed the ‘Lime’ coloured pair of the Backbeat 305s, but you can also get them in Coral, Black or even ‘Dark’ Blue colour options. The colour is only a small part of the cable in some cases, Lime & Coral colours make up only the 3-4 inches from the inline control to the earbud, while the rest of the braided cable is grey, while Black and Dark Blue are descriptions of the cable, while the 3-4 inches from the inline controller to the earbud is a lighter colour.

As sound quality goes the BackBeat FIT 305s are pretty decent. You get a clean, crisp sound for most music that you’ll listen to unless it relies heavily on bass or you listen to it at extreme volumes. It’s pretty standard fare for earbuds, but certainly better quality than the cheap $20 or $30 pairs of bluetooth earphones I’ve tried from places like GearBest or The Reject Shop.

These are Bluetooth earbuds, so of course clarity, connection and distance is a concern. Plantronics claim the earbuds work up to 10m away. In practice, this is sort of correct. With clear line of sight between my phone and the buds there was no issue, but twice when having my phone in my pocket or when walking out of a room with them in and leaving my phone the connection got patchy. Most of the time with phone in my pocket I was happily listening to podcasts and music with no interruptions.

As microphones go, the on inside the inline controller on the BackBeat FIT 305s is pretty decent. It picked up my voice quite easily and the caller could hear me quite well while on the cross trainer at the gym which has a fair amount of ambient noise.

The Backbeat 305 earphones, as mentioned previously, charge from a microUSB port in the inline controller. The battery includes up to 6 hours of listening time says Plantronics – and they’re right, I got a little over 6 hours for the time I reviewed them.

The Plantronics Backbeat 305 takes anywhere up to 2 hours charge fully, indicated by the red LED that’s built into the inline controller. The LED lights up red as it charges, and then turns off when it’s fully charged – handy to keep a check on power levels – just plug the small microUSB cable into a spare USB port on your PC while you’re at your desk and they charge nicely. There’s also a quick charging feature which Plantronics says will give you an hour of listening time from a mere 15 minute charge. 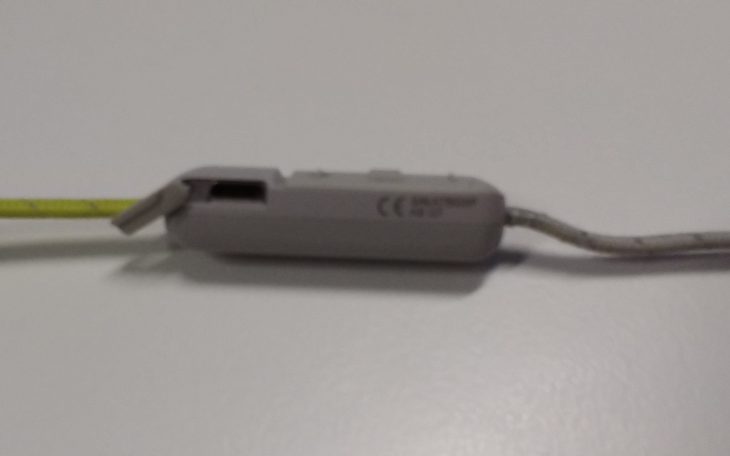 So, a pleasant follow through from the BackBeat FIT I reviewed earlier this year is that Plantronics give you alerts for power levels. An audible alert sounds when you turn on the earphones and connect the earphones to a device tells you if the battery level is high, or medium, it also tells you when your Backbeat 305s are running low in power, a first warning about 20 minutes out, a second warning about 5 minutes out and a firm final warning as the earphones turn off.

Surprisingly for Bluetooth earbuds that aren’t over-ear I quite liked the Backbeat FIT 305s. I mainly listen to podcasts on earphones, so not a huge call for dynamic range in music, but when I run out of podcasts it is nice to have a pair that will play music nicely.

At $129.95 they’re on the cheaper end of the range of corded earphones I’ve reviewed this year, and it’s getting to the point now where I do question why I’m paying any more than this. Of course if you’re into sound quality, then being both Bluetooth and earbuds with smaller drivers, these are probably not the right choice of ear wear for you, in which case the Backbeat FIT 505 are possibly more in your range.

I quite liked the comfort, fit and audio alerts of the Backbeat FIT 305s. They’re good for podcasts and can mostly hold their own when it comes to music as well. They’re also well priced enough as a stocking stuffer if you’re looking for something for Christmas.

If you want to check the Backbeat FIT 305 earphones out, you can find them on the Plantronics website, in-store at JB Hi-Fi, Harvey Norman, Rebel Sport and Officeworks – or eBay if you want to save a few dollars ;).