Home News and Editorial There is an Easter Egg on a whole new level inside the... 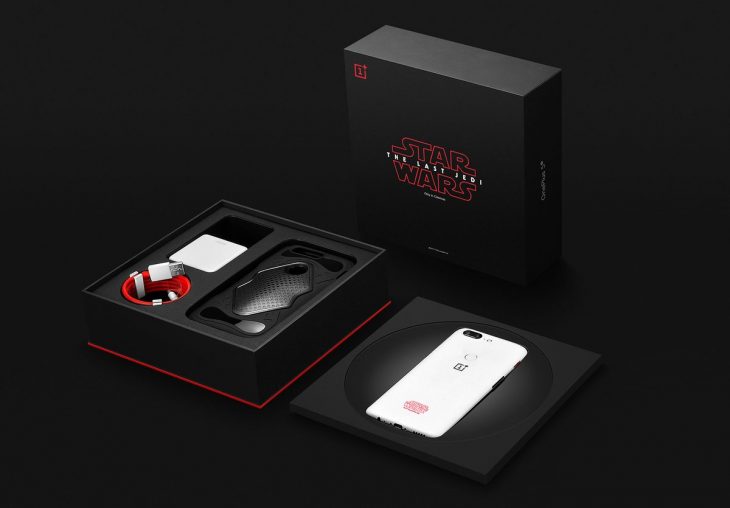 Even though it is nearly Christmas we love a good Easter Egg no matter the time of year. OnePlus released the OnePlus 5T Star Wars Limited Edition last week and it seems that they have included some secret Easter Eggs that take the Easter Egg game to a whole new level.

The folks over at Android Central did some super-sleuthing and code breaking and managed to unlock the hidden code. OnePlus spoke a lot about the greeting card inside the box at the launch, about how it was their favourite thing in the box (aside from the phone) and how it took them as long to write as it did to develop the phone. Now we see why.

Android Central combined all the first letters of each line and it spelled out “Scribble with pencil” and after doing so a message can be seen at the bottom of the greeting card.

Find the secret compartment and check the weather forecast on Ahch-To.

They then found a secret compartment in the bottom section of the box which housed a collapsible prism. Once assembled they then opened the OnePlus Weather app and seached for Ahch-To. This then plays a secret message telling you how to align the prism to show a message from R2-D2.

We’ve seen these Prism videos before, searching for HOLHO on YouTube brings up several so you can see the effect, and if you want to try it out yourself, places like GearBest sell the prism for a few dollars – or you can make your own.

The Star Wars easter egg is exclusive to the OP5T (for now, until some dev gets to it), and is some next-level effort that OnePlus have gone to and I can’t see anyone else aside from maybe Google doing this. They really are focused on the fans at the moment OnePlus. Hopefully they start focusing on the Aussie fans sometime soon.

I will have an un-boxing and review of my OnePlus 5T Star Wars Limited Edition, which is currently in the hands of my mail forwarder in India, next week.

That is awesome!!
What did it cost you to get it here?

Android Central did it not Ausdroid.

“I will have an un-boxing and review of my OnePlus 5T Star Wars Limited Edition, which is currently in the hands of my mail forwarder in India, next week.”

wasnt cheap. seems the mail forwarders in India don’t have as good a deal as those in the US. but worth it IMO. around $60US postage via DHL

Oh man, I don’t know which one to get! SW Edition or that gorgeous red?

Going by prices the star wars one will cost close to 1k delivered allowing nearly 800 for phone plus cc fees if you have to pay them then another 100 for shipping.

yes. that’s about the sum of it. I am still very nervous about the indian mail forwarders….

Will this be your daily driver?
I noticed that you can also purchase the SW Edition from Sweden!
Not sure what the price difference is though.

Good question. Rocking a Pixel 2 XL atm which I think is the best phone I have ever used….. it will be a close call…

Can i buy the one that you decide that you wont use as a daily?

Ahh you are correct. I thought you meant the video etc but yeah my bad.