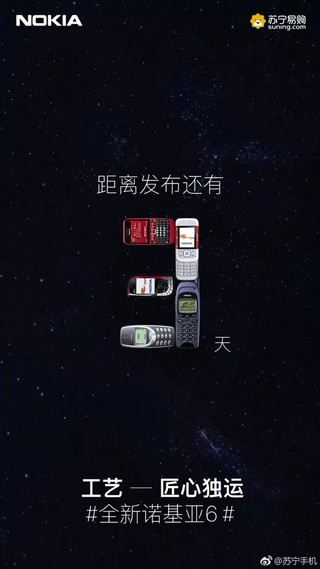 With news just a few days ago that the Nokia 6 (2018) had passed through China’s TENAA, it appears that the midweight phone from Nokia could be announced far sooner than expected. The latest information, from Chinese retailer Suning, suggests that it could be as soon as Friday, 5 January 2018.

According to Phone Arena, the official Weibo account of Suning shared the following poster, which counts down the days left until the announcement of the new Nokia 6. Expectations were that this might happen later in January, or even closer to MWC 2018, but it seems that we might see it much sooner:

This wouldn’t be the first time that Nokia’s new handsets have appeared in China before being globally announced elsewhere; though Nokia 6 (2018) may appear in China this week, it’s not likely to be shown off too widely until MWC in seven weeks.