Google’s not-so-secret new OS called Fuchsia is interesting to many pundits in the tech industry as its development is played out in the open. The OS is bootable on Google’s latest laptop, the Pixelbook, and of course that means it’s been booted up and played with.

There are a couple of people who’ve been playing with Fuchsia, including Ars Technica’s Ron Amadeo, and one Mitch Blevins from YouTube. Mitch has so far uploaded three videos on his YouTube channel showing his foray into running Fuchsia on Pixelboook, while Ron has today published a run through of the OS and where it’s currently at in terms of development and both are kind of interesting.

To start with the OS is far from usable, but does include both a GUI and a command line interface. The system starts at a lockscreen which has what appears to be a fairly standard Google login screen but for now at least, you can’t login to it – or at least non-authorised users can’t. The Guest account however is working. There’s one other neat trick in that the Fuchsia logo in the top left hand corner of the screen allows users to toggle between what appears to be a phone and desktop UI.

The system has a main desktop, a recent apps area and a sort of feed area. In the centre of the main desktop is the Fuchsia logo which brings up a quick settings style menu. The hardware is mostly working, though it seems that WiFi isn’t working just yet. 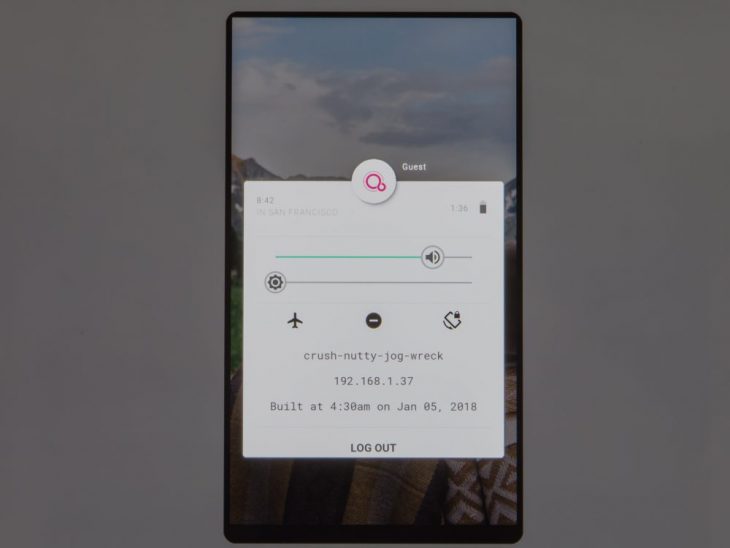 If you want to see a lot more, you can check out Mitch Blevins’ YouTube channel where he’s posted three videos on Fuchsia on the Pixelbook, or Ars Technica for the full rundown. Ron Armadeo has also posted full size wallpapers from Fuchsia to Dropbox if you want to check those out.

Amazing to see this os on a laptop as well as working on mobile phones, there making one os for all devices.