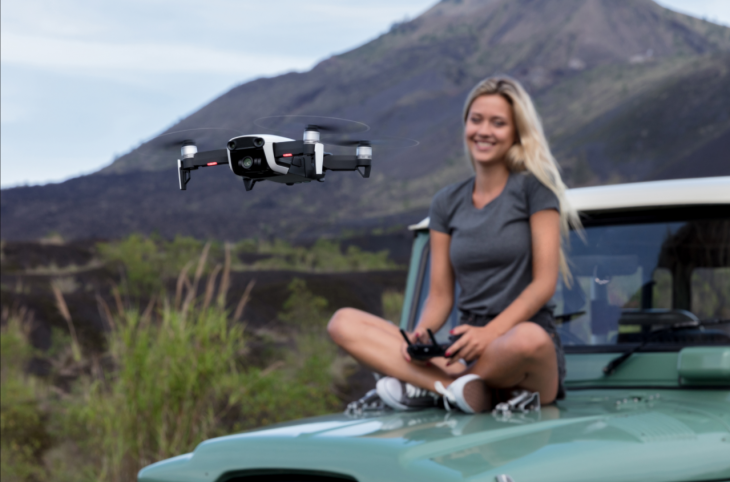 Drone maker DJI has today announced their latest effort, a mid-range drone called the Mavic Air which fills a gap in their range between the budget friendly Spark and their higher-end Mavic Pro.

The drone will be priced at $1,299AUD, but adds in a bunch of feature updates from the lower end Spark. The Mavic Air is smaller in size incorporating folding arms and propellers which sit flush against the frame, making it nearly the size of a modern smartphone when folded. It’s lighter than the Pro at just 430grams.

As a drone you can expect up to 21 minutes of flight time – slightly less than the Mavic Pro – and can reach speeds up to 36 kph in standard mode or up to 68kph in Sport Mode with a maximum ceiling of 5,000m above sea level and a maximum range of up to 4km.

The Mavic Air, like the rest of the DJI drones includes a camera which has been mounted on a new 3-axis gimbal. DJI has respectable history with cameras and the 1/2.3″ sensor on the Mavic Air is no different with the camer able to capture 4K video at 30 frames per second, or for the more exciting shots 1080p slow-motion video at 120 fps. The drone can also capture 12MP still shots with HDR that will ‘preserve more highlight and low light details’.

The drone includes 8GB of on-board storage but you can also add memory through the microSD card slot.

The drone will be available to order in three colours – Onyx Black, Arctic White and Flame Red – from January 28th directly from DJI through their store at dji.com/mavic-air. The base drone will set you back $1,299 but a ‘Mavic Air Fly More Combo’ pack is available for $1,599 which includes the drone, three batteries, a remote controller, a travel bag, two pairs of propeller guards, six pairs of propellers, a battery to power bank adapter and battery charging hub.