Home Mobiles Having seen the rumoured look of the Galaxy S9 … our phones... 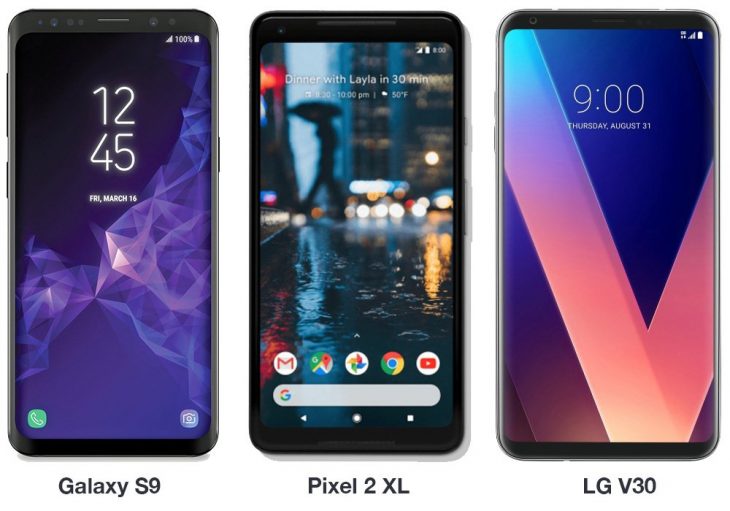 Just in the last couple of days the leaks around Samsung’s upcoming Galaxy S9 have intensified, and we’ve got rumours of likely specifications and even what it’s going to look like. As you can see the image above we’ve reached an interesting stage in smartphones… many of the most popular models all look almost exactly the same.

Shown above are this year’s Galaxy S9 (albeit just a render), the Pixel 2XL and LG V30. You’ll notice a number of striking similarities. Black outline. Screen that takes up virtually the entirety of the front. A narrow black band at the top which contains an earpiece, a varied number of cameras, proximity sensors and the like. That’s it.

In fact, find me anything that’s really different. Besides what is depicted on each display, the phones are so almost identical that if I’d been minded to move things around with an image editor, chances are you wouldn’t even notice.

Smartphones used to be differentiated by different placements of things, but the manufacturers of Android seem to have forgotten one of the main mottos – “Be together, Not the same”.

This is nothing more than a casual observation, really. I quite like where Android is at the moment. There’s so much competition that it’s pushing mobile companies to make better and better phones, and ultimately we – as the consumers of that technology – are the beneficiaries. However, there’s nothing wrong with wanting a bit of flair.

After all, we don’t all drive cars that are the same colour, shape and size, and I don’t want to use a black slab of a phone that looks exactly the same as everyone else’s. I like colour, I like different sizes and shapes. I like a phone that comes in a loud colour, or that looks just a bit different.

Instead of 14 different companies vying for your money for their black slab that looks like everyone else’s, I want to see something different. Give me a bright, glossy colour (e.g. HTC’s U11 and its liquid metal appearance) or a design that makes the most of available space (e.g. something with a notch and a clever use of screen real-estate).

Gimme front firing stereo speakers any day and you can keep the junk in the trunk that the current pixel2 xl has, im pretty happy with it despite its few (hah) hiccups… Its the best sounding phone ive owned since the nexus6

Pretty hard to differentiate the front panel of a phone when the screens now take up 85%+ of the surface area.

You make an entirely valid point

To be fair, 2/3 of those phones come from the same factory ?
Though aside from how you do the curved bevel and lay out the top sensors, is there really any way to make the front face of a phone stand out any more when it’s mostly screen?
… And don’t say by using notches, because that’s an ugly trend that people aren’t interested in according to the latest news on sales reports.