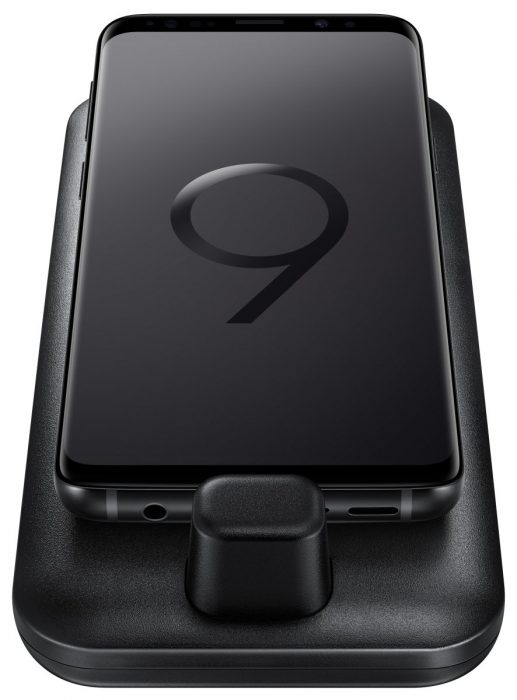 The Samsung Dex was announced alongside the Galaxy S8 last year to great fanfare. Unfortunately by all accounts it failed to live up to these expectations but that hasn’t stopped Samsung from continuing along these lines with the next version of DeX leaking today.

The Samsung Galaxy S9 is set to launch at MWC in Barcelona in a few weeks time and it appears that the next incarnation of DeX, the DeX Pad, will be announced with it at the same time. Today Evan Blass has revealed the DeX Pad in images, something he commented on back in November:

Samsung plans to introduce a backward-compatible DeX docking station that situates the phones flat and utilizes the screens as either a touchpad or a virtual keyboard.

The next DeX Pad will connect to the phone using a USB-C plug and the phone will be lying flat on the pad. The phone can then be used as a trackpad for operating the PC functionality projector to a monitor via HDMI. There are also two USB ports within the dock for added functionality and storage. The DeX Pad looks like a great idea although the pricing is what will dissuade many people from purchasing it with the original DeX costing around the $200 mark when it was released. Huawei have their PC projection option in the Mate 10 and all that requires is a plain old USB-C to HDMI cable/converter. Hopefully Samsung price this attractively to get it into more hands out there.

The Samsung train is coming and everyone it seems is getting out of its way. MWC new phone releases will be all about Samsung and their new Galaxy S9 and S9+. No one is daring to take them on at this stage. We will see more surrounding this dock and the Galaxy S9 phones in a few weeks time — stay tuned to Ausdroid where will will have full coverage from Barcelona of the Samsung announcements.

It would be a shame if Sammy didn’t make it backwards compatible with S8 variants , I doubt Samsung would cut off earlier models unless there was some valid engineering reason .
As for just using a cable without the dex dock , the current dex fan cools the device , charges the device , gives you a stand , and folds up into a very pocketable unit .
Much better than going the cheap way out with just a cable if you ask me .

Point taken mate, apparently the new models are very close to the same dimensions as the S8 variants , i cant really see any reason why they would not work on the old dex, i suspect the new flatbed dex with track pad functionality would be a response by samsung not wanting to be outdone to huawei`s track pad feature on the mate 10 phone . i dont see anything sinister about it . From what i have seen of sammy products , they usually make accessories backwards compatible if at all possible. As for the using the earphone jack… Read more »

I like the current dex , still using it as my home computer , huawei’s version looks ok , but from what I have seen the dex is better by a long shot ,
and huawei’s version appears to be only suitable for short term use.
Having said that , it would be nice if Sammy put a bit more effort into making all apps run full screen , and this is also a problem with huawei’s version.