Spanish language website Computer Hoy have got themselves some photos of what’s reported to be a Huawei P20 lite. Though these photos are a bit rough, and in some cases, very blurry .. the shoe fits. They match very closely the renders we’ve seen last night, and citing an unnamed source which provided the photos, there’s some new details which sound pretty good too. So let’s take a look

The notch. It’s definitely coming across the P20 range, and though it looks like it’ll integrate a little better than Apple’s iPhone X, it still raises some questions. While it does not appear that the notch prevents the Android display from making good use of the upper sections, it does appear that it will change the way Android’s status bar works. 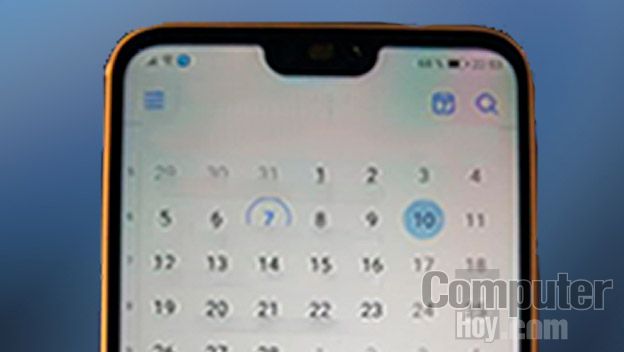 The screen has been measured as 5.8-inches across, in 18:9 ratio, with rounded corners in the style of many 2017 phones. While we reported last night that there was some ambiguity over the home button, this device doesn’t feature one at all opting for purely on-screen buttons. To house that larger display, the P20 lite appears to be a touch larger than the P10 standard. On the back, it appears Huawei have opted for a glass panel (at least, on this particular device). The double rear camera is shown in vertical orientation, with flash immediately beneath. A center-mounted fingerprint sensor is also shown. On the bottom is a port layout that will be entirely familiar to anyone who used 2017’s P10 range. The P20 lite features a 3.5mm headset jack (which we understand will only be on the lite model, the higher models won’t have one) and a USB-C port, next to a bottom-firing speaker.

The P20 lite features a volume rocker and power key on the right, and a SIM tray on the left which can accommodate either dual SIMs or a SIM and MicroSD card combo.

The only thing we can’t confirm from this information is the RAM and storage configuration; the test device accessed by Computer Hoy’s source appears to be configured not to report actual information from the device itself in an attempt to frustrate would-be leakers. From what can be ascertained, this P20 lite appears to have 4GB of RAM (at least) and 32GB of on-board storage. This fits with the lite specification.

Of course, take all this with a giant grain of salt. Blurry photos, screenshots showing nothing useful, and information which — really — isn’t much beyond the leaks we’ve already seen all point to this information being questionable at best.

Still, in the absence of any official confirmation, we’ll take it – I stand by what I said last night. The Huawei P20 line is looking very exciting.