Fitbands were all the rage not long ago. Even though they have died off a little there are still a LOT of people using them — not everyone wants, needs nor can afford a true smartwatch and for these people a fitband is all they need. The Garmin vivofit 4 aims to provide just what these people want, a basic fitband that counts steps and has basic fitness functions.

It is a basic band with a small, coloured display seated within it. The band has a very solid buckle on it — gone are the flimsy poke-through-the-hole bands of yesteryear, thank goodness. In the box you receive the band and display itself along with a second band (white in this case — but others are available). The second band is only available in the small and medium boxes with the large costing the same but including only one band.

There is no charger in the box which at first was a bit of a shock until I realised one is not needed — more on this later.

How is the display?

Garmin advertise the display in the vivofit 4 as being visible in full sunlight and I have to agree with them. This display is the best in-sunlight display I have ever used. I used it for quite a few days and not once did I have to shield the display to be able to read it. The display is mostly black and white with a few colours at various portions of the interface.

Beneath the display is a silver button to scroll through the options of the watch as the display was not a touch sensitive display. Let me touch on that for a bit- far too many fitbands have a touch display that works intermittently just so they can say they have a touch display. Garmin have forgone that “selling point” with a solid steel button that is easy to press and works every single time — this gives a much better experience when using the fitband.

Imagine having to mess around with the fitband’s display while going hell for leather on a treadmill to get something working. The steel button makes for much easier use. 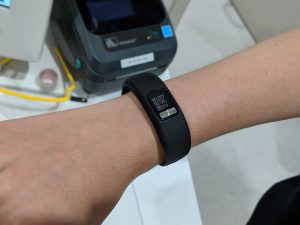 But is it comfortable?

Garmin fitbands have always been the most comfortable fitbands I have used and even though this was the small version that barely fit around my wrist it was the same as all other Garmin bands. The soft, supple, pliable band allowed it to comfortably wrap around my wrist and feel like it wasn’t even there — yes I nearly walked into the MRI room and wiped it because I forgot I had it on.

Garmin really are in a league of their own with the comfort of their fitbands. It has to do with the material they use which gives it more flexibility than other brands.

What about the functionality

The functionality of the vivofit 4 is one of the more basic fitbands around and you know what? I don’t care. I rarely use many functions at all. I will use it to measure steps, my exercise and interval times during HIIT training, maybe sleep times and that’s about it.

Sure it can also do calorie counting, distance, along with auto-activity start and Garmin’s Move IQ which can detect the movement of the band and determine the type of exercise you are undertaking but I did not use any of these to any great extent.

The vivofit 4 is also waterproof with a 5 ATM resistance rating which means you can wear it swimming or in the shower: shower steps and calories count too you know!

What about the app?

I have covered the Garmin app in previous Garmin products I have reviewed. The app has a new design but is a lot simpler to use, still continues with a dark theme and has everything you could want in there, easily accessible, where you would expect it to be. It syncs easily with the vivofit 4, when you want it to — continuous sync is not on as that would destroy the 1 year battery life but for those using this basic fitband continuous sync is not required.

Is the battery life really 1 year?

Well that one’s a tough one to answer in a two week review period. When I first removed the viviofit 4 from the box I was wondering where the charger was. Then when I realised that it was a one year battery life I was wondering what you do then? Do you just throw it out and go buy a new one? Nope. You can replace the two SR43 batteries yourself or at any watch shop.

That’s right. You heard me. Replaceable batteries. Old school and I love it! Replace them once a year and you have a new watch good to go. We all know that rechargeable batteries wear out over time and it is a pain to have to charge your fitband every week or so and the older they get the less charge they will hold. Solution: replace the batteries with plain old coin cell batteries and you have a brand new watch again!

If any of the above is you then this could well be the fitband for you. Although it is not the fitband for me as I need my phone notifications there are a lot of people out there who just need something like this. With a battery life of over a year, a comfortable band and a display that can be seen in any amount of sunlight I cannot recommend this fitband highly enough.

The Garmin vivofit 4 can be purchased from Garmin Australia and all the usual places you find this sort of thing (Rebel, JB Hi-Fi, Harvey Norman etc) for a RRP of $159 in a black and white bundle for small and medium and in black for the large version.

Nice review, I’m thinking about getting this or the Garmin Charge 2 but not sure which is better. Just need it for tracking sleep mostly. Never had an activity tracker before