If you’ve been buying mobile phones for any length of times in Australia and happened to wander into a Telstra store you’ll inevitably have been offered a Telstra branded handset. The Telstra phones have been, for the most part, produced by ZTE. That’s true again for the Telstra Tough Max 2 which appears on the ZTE website as the T85. ZTE aren’t selling it themselves, so if it appeals to you, it’s off to a Telstra store you’ll have to go.

The Tough Max 2 is not the first Telstra phone that’s been ruggedised, the first that comes to mind is the Telstra Dave. It seems Telstra has a penchant for naming their phones after blokes, which makes the Max 2 (the second generation of the Max) a missed opportunity for the Telstra Baz, Robbo or, going for a more feminine touch – the Shazza, but I digress. It’s a rugged phone, and carries the distinction of carrying Telstra’s Blue Tick certification – plus another little trick to get better reception that we’ll get to later.

The Tough Max 2 is only available on contract from Telstra where it sells from $66 per month. It’s a bit of a hike in price for a Telstra branded handset, but it comes packed with features.

I’ve had a play with the Tough Max 2 for the past week and it’s grown on me. I’ve got some thoughts, so here we go.

The Tough Max 2 isn’t the prettiest looking handset but it’s functional and it’s ruggedised so it fits the general mold for this range of phones. There’s rubber bumpers and plastic all over the body of the Tough Max 2 (TM2 from now on), which protect it from bumps and scratches – it has an IP67 dust/water proof rating, it doesn’t have a MIL-Spec rating but feels like it should be right to take a small drop but I don’t advocate trying that out it’s just nice to have it there.

Both the front and rear of the phone is as industrial and utilitarian as you could possibly want. It looks rugged, it feels rugged and I have no doubts it’s designed to last a tradie or any one else who needs a phone that can take a knock and keep on ticking.

The phone has loads of buttons, the usual power button and volume rocker and then on the front you get physical Back, Home and Multi-tasking keys (in the right order!). There’s also what’s called a ‘Super Key’ on the top of the phone near the 3.5mm headphone jack (yep, it still has one), that you can assign to a number of functions like launching the camera, flashlight or something else. Additionally you get a fingerprint sensor on the rear, just below the camera, to unlock your phone and that sensor is very serviceably quick.

In keeping with the rugged nature of the phone there’s a flap on the left hand side (above the volume rocker) to cover the SIM card/microSD card slot. It’s a bit of a job to get the SIM tray out, but you don’t tend to be in there very often so that’s ok. The rear of the phone has an efficient rear facing speaker, it’s not going to wow you but it won’t disappoint either. The speaker is right next to another flap on the phone, which this time hides the RF antenna port. The theory is that you can attach an antenna for better signal in areas which aren’t getting the best signal. Telstra don’t actually sell these in their store but you can buy one from ZTE for $34.95.

The internals of the phone are decently respectable for a ruggedised mid-range phone. It’s powered by a Snapdragon 435 processor with 3GB of RAM, 32GB of onboard storage with a microSD card slot, and it has decent camera chops including a 16MP rear camera sensor and 8MP front-facing selfie camera. A bright 5″ HD (1280 x 720) resolution display is included on the front of the phone and it’s covered in Gorilla Glass in keeping with the ruggedised nature of the phone. Telstra have also helpfully included a screen protector in the box so that’s a nice bonus too. The TM2 is powered by a 3,000mAh battery which is serviceable to get you through most of the day on a single charge with a decent amount of usage. It supports Quick Charge 2 for fast charging through the microUSB port and for wireless charging fanatics it supports Qi wireless charging but like most phones that do it’s slow and you’ll futz around longer finding the charging target than you would just plugging it in. 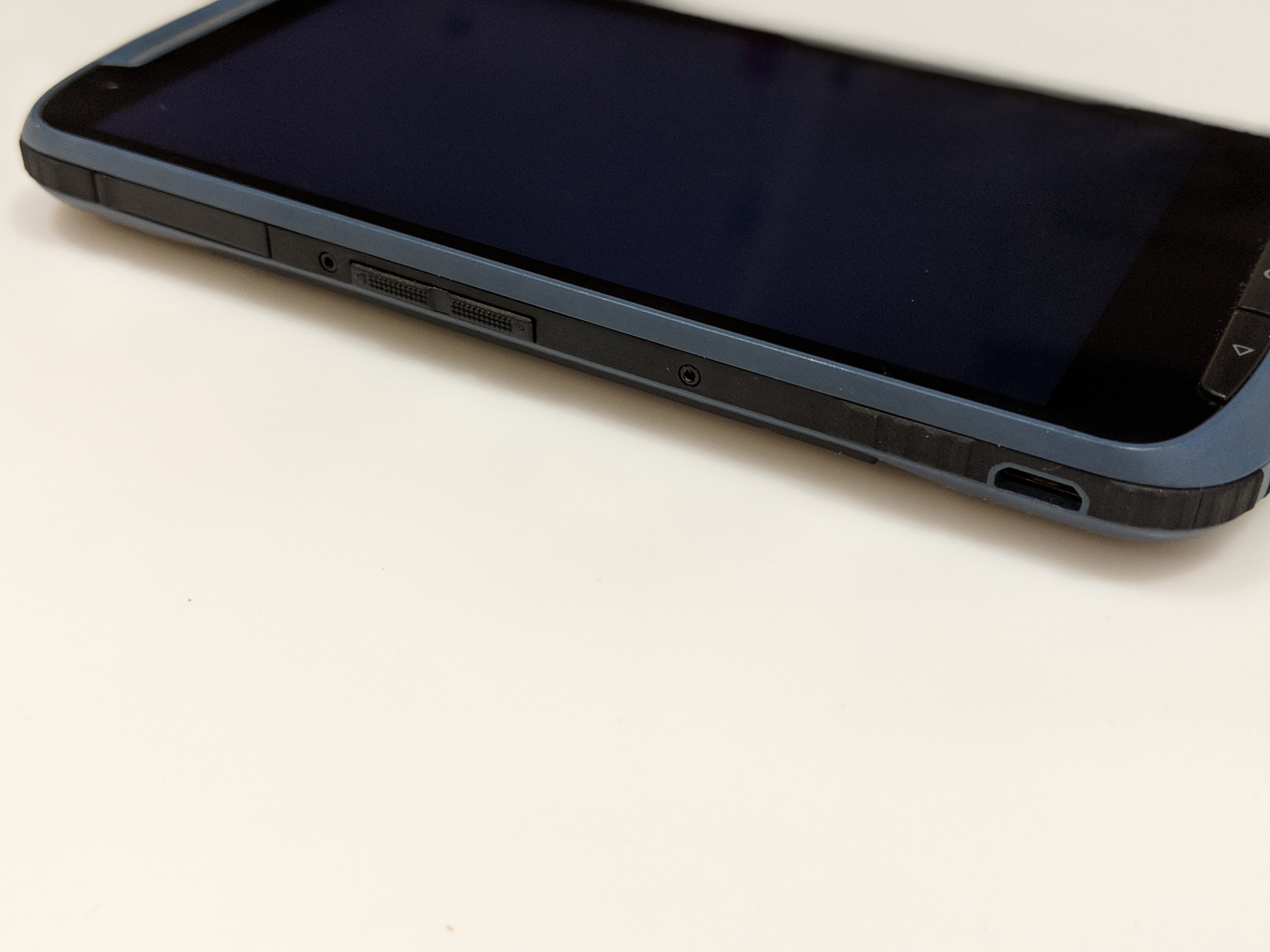 The wireless support includes LTE Cat 6 which gives you up to 300Mbps downloads (50Mbps up), as well as Wi-Fi, Bluetooth 4.2, A-GPS and as a bonus for a mid-range phone: NFC, there’s even an FM Radio included so you can listen at the cricket, Footy or wherever else this comes in handy. The phone basically ticks all the boxes for a well specced phone, it’s not top of the line but it mostly does all that you could ask for a modern day smartphone.

The photos taken in decent light are quite nice as you can see from these sample shots below. The one shot that didn’t really work was the rose which was more red than pink in reality, but it still captured the flower quite well:

There is one glaring issue when it comes to smartphone photography and that’s low-light photography. The TM2 isn’t quite up to the task when it comes to taking shots at night. The TM2 actually includes OIS which helps, but the resultant shots are still only what I’d call ‘Ok’.

In terms of the camera app, ZTE has done a wonderful job here. The app is simple with easy access to a number of neat features including things like filters, Live Photos and you can also access a Manual mode that lets you play with ISO, Exposure, White Balance and Focus. You can even set up an interval timer which is useful for timelapse shots – love it. Your usual Panorama shots are still there, but you also get a Multi-Exposure setting that allows you to get some neat shots and in video mode you get slow motion.

Overall it’s a pretty impressive package for a mid-range phone. There’s small issues, but nothing that’s going to prevent you from getting the shot when you need it.

The TM2 runs Android 7.1.2 out of the box with the September 1st 2017 security patch. The phone is up to date with no updates available even now in February 2018. Telstra has proven they’ve updated phones in their Signature line before, but they’ve got a less than stellar record with their standard branded phones.

For fans of stock Android the TM2 is pleasantly free of cruft, though it pays to remember this is a Telstra phone sold on contract so as soon as you login you’ll find the phone downloading the Telstra 24×7 app and the Telstra Air apps from Google Play.

Apart from those Telstra apps you’ll find the usual Google Play app plus a few useful utilities like the FM Radio app, a note-taking app, voice recorder, File Manager, flashlight app (yeah, no idea about why either), Video player, SIM Toolkit and a user guide which is pretty handy for new users. There’s also a local gallery app which I like personally, but Google Photos is also here if you prefer it.

It’s stock all the way as far as phone handling, Settings is stock, the Launcher is stock and the app drawer handles the way it does on a standard stock Android phone. Put simply, it’s great.

There are a few touches which are included in this Android build which makes it more along the lines of Stock Android Plus, things like Simple Touch which lets you quick launch an app or action such as taking a photo or answering a call when swiped. The included ‘Super Key’ at the top of the phone is also programmable allowing you to assign Camera Quick Start, Flashlight, Screenshot or any app you want to the key – this is a great feature.

Overall, the phone handles quite nicely with a fairly decent processor, 3GB of RAM and with relatively little crap installed it’s a good experience. You get Nougat on the phone which is fine, but ideally we’d all love to have the latest OS which means Oreo but the reality is this is unlikely, though I’m always willing to be proven wrong.

Should you buy this phone

I’m relatively impressed with the Tough Max 2. It’s got most of what counts when it comes to hardware with a fast and fairly well designed package. The phone is a little chunky if you don’t like that thing, but that’s the price you pay for a ruggedised, tough phone. Hardware keys for Home, Back and Multi-tasking is also something you’re either going to love or hate so that’s a choice you’ll have to make.

With a Blue Tick rating for working well in regional, or traditionally low-service areas combined with the option to add an RF antenna to improve that as well, the TM2 is formidable when it comes to the ability to make a call or get data almost anywhere in Australia. For the average farmer, tradie or even just the average clumsy oaf like me who has dropped a phone a time or two it’s a good handset.

In terms of pricing, the Tough Max 2 is priced a little high for my liking, but Telstra are doing pretty good deals with their data bundling on the higher plans. You get what you pay for here, the Telstra network which covers 98% of the population is part and parcel in this deal.

If you need good reception, work in a high risk area, have been clumsy with your phone in the past or just want something to take with you through a Tough Mudder (I’m negotiating with Telstra on this one) then the Telstra Tough Max 2 is a surprisingly good option. For the average person it may be a little over the top, but even then it’s tempting.

1.Can the battery be removed, for replacement or reset when nothing else works.
2. I take photos of identity labels, part numbers etc on devices for reference later, also documents/invoices when no scanner is available. I have seen no such examples. How does the camera perform there?
3. What size sim card?

Just for the record…..Max is a blokes name.

Nope sorry. Max can also be short for Maxine..

Telstra Tough Max 2 looks pretty good! Your review made me want to buy this one. DoAHomework service helped me with writing paper and now I have some free time to read more about the phone and decide if I really want it or not.