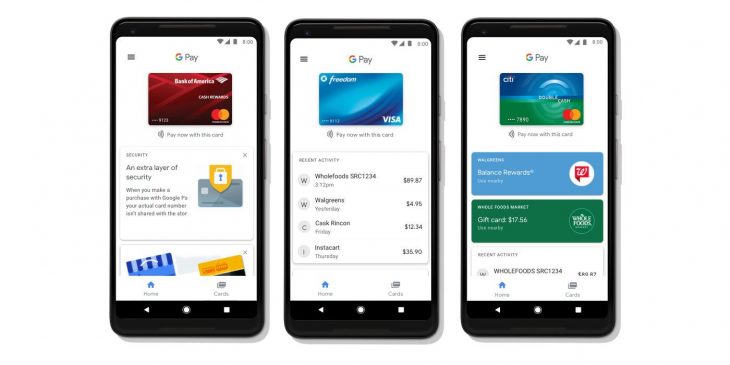 Google’s Android services are slowly moving away from the use of Android in the name, and that change has now arrived for Android Pay .. which is now Google Pay (or G Pay). It looked like this was beginning late last month, but perhaps we jumped a bit too quickly – it seems now, though, that the replacement is actually happening, starting in the US.

From today, the Google Pay app is replacing Android Pay on Android devices. The new update is promised to arrive on handsets “soon”, with new branding, as well as a completely new design. The Google Play Store listing has changed in Australia, but the app branding doesn’t appear to have caught up.

The layout of the app is now a bit more intuitive as well; the main screen will show your primary card as well as some contextual information, such as recent transactions or reward cards you can use nearby. A second section will list all the cards you’ve added to Google Pay, ready for use.

All of the good features of Android Pay remain, including using different card numbers to keep your original payment card secure, and the ability to use Google Pay to pay online with supported merchants.

Changes to Google Wallet are coming too, with a new feature called “Google Pay Send” to commence alongside the rollout. However, given the payment sending service never launched in Australia, it’s likely we won’t see this part of it.

Let us know when the Google Pay update arrives on your phone. As a daily user, I’ll let you know as soon as I see it!

“Google Pay Send” might work with the new PayID system for Osko payments. My Bendigo Bank App is up and running.

Still Android Pay in the store for me