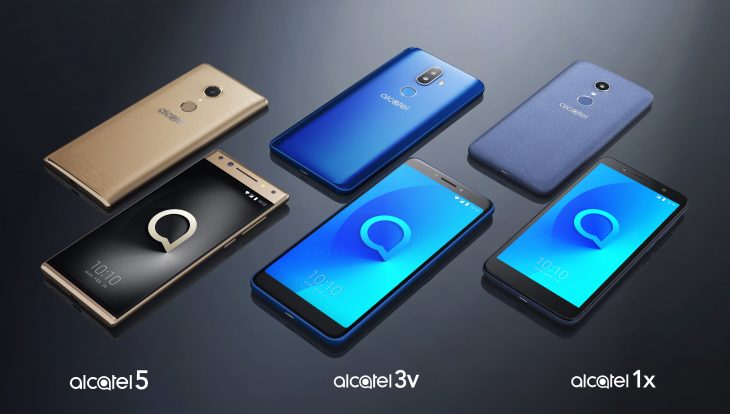 At their event in Barcelona ahead of Mobile World Congress, Alcatel has unveiled their latest new and evolved series of phones. Alcatel’s 2018 smartphones bring flagship-style features and the beauty of the 18:9 FullView displays to the company’s well priced line-up.

The new series includes the budget-friendly Alcatel 1x with Android Go, the beautiful, and well equipped Alcatel 3V and the Alcatel 5, the affordable flagship. All three will be coming to Australia later this year at a price point that’s aimed to please.

These three phones all include Mediatek CPUs and 18:9 aspect ratio displays, custom built for Alcatel specifically by their parent company TCL’s award-winning Television division. The 18:9 aspect ratio displays have revolutionised the smartphone industry since their arrival, allowing manufacturers to reduce the width of handsets, so that each device feels smaller and easier to hold than comparable devices with the same display size. The new range also include an all new camera experience with different models including a dual-camera sensor on either the front or rear of the phones.

Alcatel is heavily investing in security with the new Alcatel 1x, 3v and 5 phones with a new security feature called Face Key, a facial recognition technology for securing your device, unlocking it in less than half a second. Alcatel says Face Key breaks down each facial scan into over a hundred data points to ensure a more reliable match. The company is also getting more serious about their Android security updates, committing to a minimum quarterly update schedule for their most popular phones already released, and their entire range of 2018 devices.

For nearly 20 years, Alcatel has been a leader at delivering high-quality, premium mobile technology experiences that are accessible to consumers around the world. As we introduce an all-new direction for our smartphone portfolio, we remain focused and committed to pushing the boundaries of what an affordably priced smartphone can be, providing even richer experiences and flagship-style designs for our customers around the globe.

So, let’s take a look at what Alcatel have announced today. 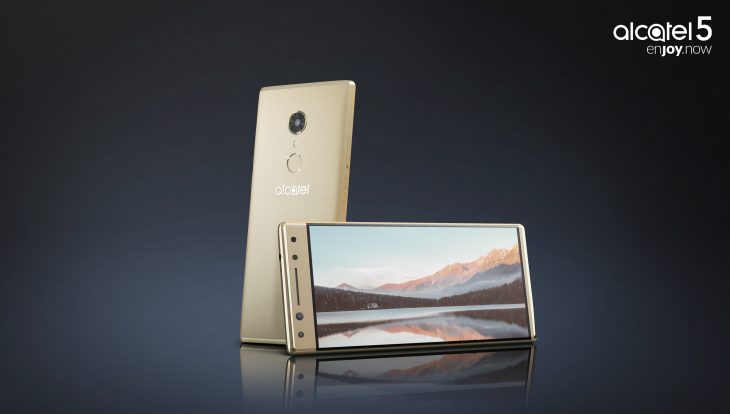 At the top of the range is the Alcatel 5. The Alcatel 5 is the budget-friendly phone with flagship specs and a mid-range price. It’s set to arrive in Australia at under $300AUD, which fits well for the range of hardware included inside, but with the bright, HD+ resolution 5.7″ display it certainly looks the part with other higher end devices.

With an Octa-Core processor running the show, and a 3,000mAh battery pushing only HD resolution the Alcatel 5 has the potential to push the boundaries of your battery life. The phone is being launched in two configurations, with either 2GB RAM/16GB storage or 3GB RAM/32GB storage – both with microSD card support.

Alcatel is focusing on the all important social media crowd with a selfie friendly 13MP f/2.0 front-facing camera, that has a secondary 5MP sensor behind a 120-degree super wide-angle lens and an LED flash. The rear camera is not forgotten with a hardy 12MP sensor on the rear for any other shots you want to take.

The camera software includes an intelligent auto-detect mode that can switch between the portrait mode to the wide-angle sensor when it detects more than two faces in the shot. Additionally a new social mode will allow users to review their shots in ‘Social Square’ a mode which keeps the view finder active while they check their shot, and an Instant Collage feature lets you mash up your best shots for the perfect social media post. Finally, a photo booth mode will snap off four shots in a row – 1 shot per second – to give you that old school photo booth look.

Alcatel has decided a rear-mounted fingerprint mode is the most convenient location, offering both the security of fingerprint lock, but also allows users to double the sensor up as a shutter key for the perfect selfie. The fingerprint sensor can also be programmed to open different apps or services depending on which key they use to unlock it.

Alcatel is bring the Metallic Black and Metallic Gold colour variants of the Alcatel 5 to Australia in mid to late 2018 for under $300, so keep an eye out for it when it hits our shores. 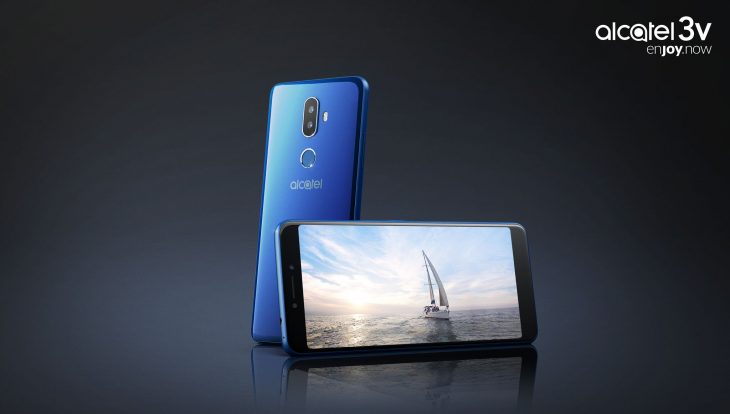 Continuing the series is the Alcatel 3 Series, broken up into the 3 and 3V, Australia will be getting the Alcatel 3V in Q3 of this year, with the stunningly gorgeous (I’m biased having seen it up close) Spectrum Blue handset, and a very lovely, classic looking Spectrum Black coloured versions of the Alcatel 3V to Australia for $199AUD.

The phone offers the best of both worlds, in terms of looks and specs in a package that’s priced just right. It has many of the features in terms of software that the Alcatel 5 does in a cheaper package. The Alcatel 3V will also include the 18:9 aspect ratio display with sleek 2.5D contoured edge glass, though in a 6″ 2160×1080 resolution, the rear fingerprint sensor and their brilliant Face Key security.

The Alcatel 3 is more for the traditional smart phone photographer with dual rear cameras – a 12MP camera paired with a 2MP secondary sensor used for depth, which can provide real-time bokeh effects and the ability to change the area of focus in post-production. Selfie addicts will still be able to scratch that itch with a 5MP front-facing cameras with LED flash for well-lit selfies any time of day.

Lastly, but by no means least is the Alcatel 1X, their best priced handset to date with the entry price expected to be under $100AUD. The Alcatel 1x is the companies first Android Go phone running Android 8.1 which is optimised for devices with less than 1GB of RAM. It’s also the first sub-$100AU device to feature an 18:9 aspect ratio display, making it both gorgeous to look at, comfortable to hold and in theory, fast.

The Alcatel 1x will have two options with either 1GB or 2GB of RAM and 16GB of on-board storage. Like the rest of the Alcatel phones announced tonight it’s powered by a Mediatek processor and with Android Go running the show, the phone should be ultra-quick. There is a slight hitch with the Alcatel 1x arriving in Australia without a fingerprint sensor.

The Alcatel 1x will definitely include the Social Mode for the Camera, so your perfect selfies will be included in that Android Go build.

This series of phones for me strikes a turning point for Alcatel. They’ve designed a range of phones which include modern design language with curved sleek lines on the body paired with the latest 18:9 aspect ratio displays. With the Alcatel 3 and Alcatel 5 handsets, Alcatel have embraced dual-camera sensors on their well priced and positioned handsets with options for both the selfie lovers and more traditional smartphone shutterbugs.

The Android 1x is perhaps their most ambitious device to date, with an enticing sub-$100AUD price point for hardware that includes that 18:9 aspect ratio display commonly only found on much higher priced handsets. The decision to run the Android Go version of the operating system, that will come out of the box with Android 8.1, is also a winner in my opinion with the backup of regular security updates making it one of, if not the best choice for budget conscious users.

The new Alcatel range is set to stake Alcatel a serious place in the Australian phone landscape, allowing anyone to get the new modern look at the price point they want.

Ausdroid is attending MWC with sponsorship from Alcatel and others.

Is it just me, or does $199AU seem strangely cheap for the 3V ? every site seems to be quoting different prices? Not complaining, these look like outstanding value for money.

Wow, the designs are much better than anything Sony has put out, to this date. IMO