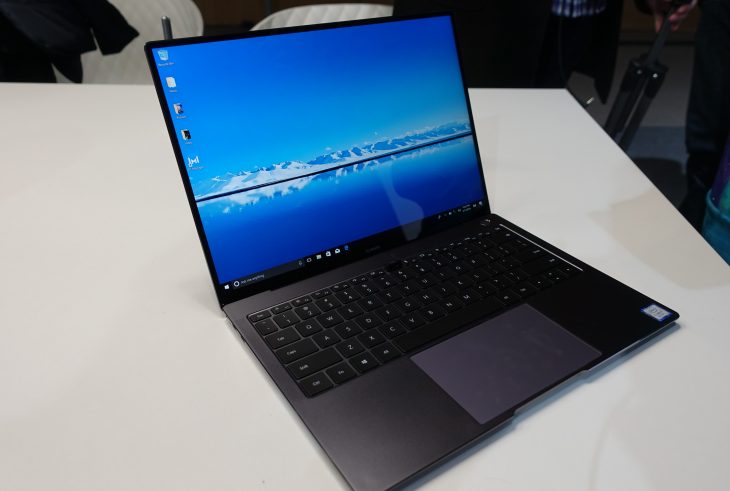 Ahead of MWC 2018, Huawei held a media briefing to announce a handful of new devices for work and home, including the MateBook X Pro (pictured above), and a slew of MediaPad M5 tablets powered by Android. No, this wasn’t a smartphone announcement, but it showed off broader parts of the Huawei product lineup which complement – if not constitute – its smartphone lineup.

This isn’t the first time we’ve seen a MateBook from Huawei; in fact, from the first launch we saw a couple of years ago the range has now expanded somewhat, and the MateBook X Pro represents a new top-tier in their mobile computing line-up.

In a nutshell, this is a 13.9-inch notebook with 3K touch-enabled FullView Display, which features a 91-percent screen-to-body ratio. Powered by an 8th gen Intel i7 processor, with separate NVIDIA GeForce MX150 GPU, this is a machine a step above your average ultrabook with integrated graphics.

Powered by a 57.4Wh battery, the MateBook X Pro promises to be one of the lightest, most powerful notebooks on the market. With this battery, Huawei claims users can see up to 15 hours use off a single charge – something this weary journalist would have appreciated today. Better still, just half an hour on charge with the supplied quick-charger gives a whopping 6 hours of extra use.

Other inclusions are Dolby Atmos-certified quad-speaker audio, power-button with integrated fingerprint reader for ultra-quick power-up times, and the inclusion of both 2 x USB-C and 1 x USB-A ports in a slimline laptop that’s thinner than Apple’s Macbook Pro range. Perhaps the cutest inclusion – and yes I can’t believe I’m using that term in an Ausdroid article – is how Huawei have integrated the camera. Instead of lobbing in a thick bottom or top bezel on the display to house the camera, the camera literally pops out of the keyboard.

Huawei MateBook X Pro integrates tightly with the company’s other products, too. For example, when used with Huawei’s Mate 10 Pro, users are able to offload 1000 photos in about 3 minutes, or transfer a 1GB video in just one minute. The best way to explain this is the tight integration that you might be familiar within Apple’s ecosystem. It looked that seamless.

Pricing and availability for Australia is yet to be confirmed, though we’re led to believe that this should arrive in Australia in the southern Autumn (so Q2, 2018). We’d almost given up hope of an Android-related announcement when Huawei’s Richard Yu re-appeared on stage with what looked like an armful of tablets. He then introduced the MediaPad M5 range in two sizes – an 8.4-inch and 10.8-inch tablet.

These are tablets built around three pillars, of Premium Design, Immersive Entertainment and Ultimate Performance, and it’s easy to see how. This is a design which takes successful elements of their past tablets and updates them for 2018; curved 2.5D glass, a metal uni-body design which makes for a lightweight tablet comfortable to hold easily in one hand.

There’s the usual other tablety inclusions, such as Hi-Res Audio, engineered speakers, a big battery, more than two days of audio playback, and broad network support for 4G networks with up to 300 mbps download speed.

As a “one more thing”, Mr Yu showed off the MediaPad M5 Pro, a device built for productivity on the go. Unlike other tablets in this space, the MediaPad M5 Pro does not run Windows 10, but instead runs Android and can dock into a foldable keyboard cover. When docked, though, it eschews the standard Android format for a desktop environment (powered by EMUI) which looks exactly like Mate 10’s docked desktop mode.

This gives it the ability to run the full-screen, desktop versions of the Microsoft Suite which were demoed on stage, as well as a pressure-sensitive M-Pen option which can be used for all manner of productivity and creative uses.

Pricing for Australia across the range is yet to be confirmed, but expect pricing to begin around the $550 mark for the 32GB 8.4-inch model, up to probably $899 for the 128GB 10.8-inch variant. It’s worth noting that 4G is included across the range; no WiFi only models here.

Once local release plans are known, we’ll come back to you with further details.

Ausdroid attended Mobile World Congress 2018 with financial support from Huawei and others.

ChromeOS would’ve made the MediaPad M5 Pro – the combination of ChromeOS with Android Apps would’ve been absolutely perfect, especially in that 2-in-1 formfactor.

Hey Chris, was the smaller Android tablet running EMUI like their phones or have they left it alone more like nVidia would do?