Nokia have had a great first year under HMD Global. 2017 saw them release 11 new Nokia phones, focusing on optimising their products to what consumers want the most. They were the number one feature phone manufacturer in the world last year and after entering over 80 markets with their smartphones they hit the top 5 for smartphone sales in 17 of these markets.

All in all, in 2017 Nokia sold a whopping 70 million phones: one would say it was a successful first year for Nokia. 2018 is a year they hope to expand even further with an emphasis on three key areas; expanding their portfolio, deepening their presence in their active markets and to continue to innovate. After the massive splash that the 3310 circa 2017 made last year Nokia are bringing back another favourite blast from the past, the 8110 — the banana phone. This time their retro device will support 4G and will run apps such as Facebook, Twitter and more, all installable from their supported app store.

The phone will also come with Google Search, Google Maps AND Google Assistant. It will also keep your Calendar and contacts synchronised.

This iconic designed phone will be available in two vibrant colours Banana Yellow and Traditional Black when it becomes available in selected markets from May 2018 for a global average price of 79EUR. There is no word on its availability in Australia just yet but we expect it to land here eventually, just as the 3310 did last year.

The Nokia software into the future

Nokia have always had a very slim, near pure version of Android on their Android phones and are now looking to head down that path even further. No longer will any of their smartphones run an OS of their own build. Instead all of their phones will now run either Android Go or Android One, with their own camera app onboard.

All phones from last year, from the Nokia 3 and above, when upgraded will be upgraded to join the Android One program. Through their work with the Google engineers they will be able to offer even faster updates to their phones as well as optimising them to the Android software just as Google intended. The team has also advised that the Nokia line running Android One will be among the first to receive the Android P update when it’s released later this year.

Nokia has also advised that they will be launching Nokia Pro Camera features on all phones announced today with Zeiss Optics. This allows for greater control of the camera, making them even more capable of capturing great moments in full, living colour. 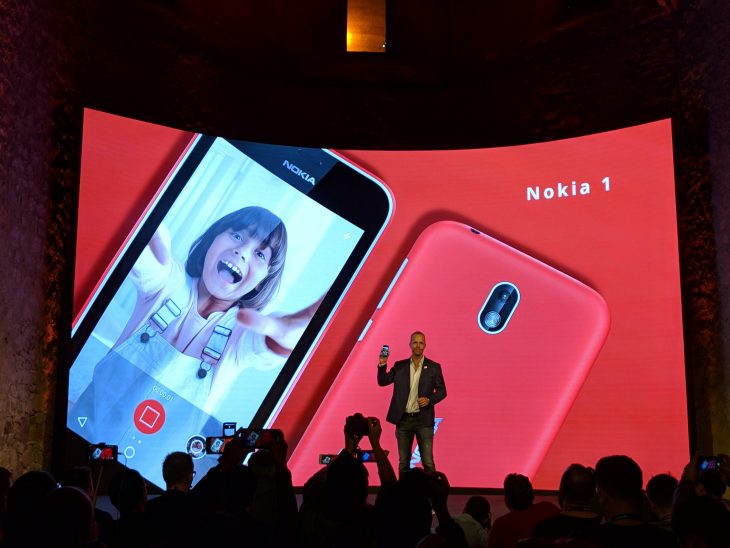 The first phone Nokia announced today was the entry level Nokia 1. The “very affordable” Nokia 1 will be durable and reliable with the body made of a coloured polycarbonate material. The phone will run Android Oreo Go edition which is so light it gives the phone 50% more user storage than would otherwise be the case.

The use of Android Go on this device allows it to be able to run fast and smoothly while at the same time be easily kept up to date with not just security patches but also the platform release version. The all new Nokia 6 The Nokia 6 was a great success for Nokia in 2017 and they are hoping to follow this up with an even better Nokia 6 in 2018. The all new Nokia 6 will once again be manufactured from a single piece of 6000 series aluminium but this time with two-tone anodisation, resulting in some great looking contrasting colours for the phone.

The rear camera will be a single lens camera sporting Zeiss optics and when combined with the front camera will be able to perform Nokia’s bothie camera functionality (real time front and rear camera capturing). The camera software will feature Nokias Pro Camera software allowing th user to teak the camera settings and see the results in real time allowing for fine control of the camera. The phone will charge it’s battery through the USB-C port using Nokia’s own fast charging technology, not Qualcomm’s.

The Nokia 6 circa 2018 will be 60% faster than last years model thanks to the Snapdragon 630 powering it along with the streamlined, optimised software. The all new Nokia 6 will run Android One and will arrive with Android 8.0 onboard. The Nokia 6 will also include facial recognition mode to let you unlock the phone simply by looking at it.

The New Nokia 6 will go no sale in early May in Australia in two colour blends, Black/Copper and White/Iron and will retail for $449 (AUD RRP) at JB Hi-Fi and Harvey Norman. The Nokia 7 Plus has not been much of a secret with it being unveiled by Evan Blass a week ago. The new addition to the Nokia lineup will once again be running Android One with the only customisation by Nokia being the Pro camera app.

The Nokia 7 Plus will sport an aluminium unibody build with six layers of ceramic-feel paint on the back of the phone. The paint is used to hide the antenna bands and as such there are no visible antenna lines without losing any signal. The signal is actually improved over many phones as the antenna are hidden and do not have to be engineered to fit the design of the phone.

The phone will have a 6 inch, 18:9 FHD display and a two day battery life: isn’t it amazing what true software/hardware optimisation can do? The Nokia 7 Plus will be powered by the Snapdragon 660 and sport 4GB of RAM.

This device will sport dual rear cameras, both with Zeiss optics: a 12MP wide angled primary camera and a 13MP telephoto lens capable of 2X optical zoom. The front-facing camera will be a 16MP and combined with the rear camera once again capable of bothies. The front facing camera is optimised to capture great selfies in low light by the combining of four pixels to make one, resulting in a greater signal to each pixel and thus a brighter image.

The new Pro Camera software will be capable of advanced AI imaging with the addition of masks into images. There will also be the addition of 3D animated personas onto the front facing images. the front-facing camera will also bring a fast face unlock to the Nokia 7 Plus. The Nokia 7 Plus will be available in Australia in the colour blend Black/Copper in May and will retail for $749 (AUD RRP) at JB Hi-Fi and Harvey Norman. The Nokia 8 Sirocco is Nokia’s highest flagship they have produced and it shows. The new smartphone will be milled from a single piece of stainless steel which has been shown to be 2.5 times stronger than aluminium bodies. The stainless steel body will be coated with 3D Gorilla Glass 5 on the front and rear of the device. With a curved edge-to-edge display the phone measures just 7.5mm at its thickest and 2.5mm at it’s thinnest.

The display is an 18:9 display ratio 5.5 inch 2K plastic OLED display. It will house the same camera as in the Nokia 7 Plus but will be powered by the Snapdragon 835 and 6GB of RAM. There will be 128GB of onboard storage for you to store all your bothies.

The all important camera will include a dual rear camera setup with a wide-angled primary camera and a secondary 13MP sensor for 2X optical zoom, both with Zeiss optics The phone will be IP67 rated and feature both Qi charging and Nokia’s fast charging technology.

It will be available in Australia in Black in May and will retail at $1,199 (AUD RRP) at JB Hi-Fi. The range of Nokia phones announced today cover the breadth of the mobile landscape offering great performance for a great price across the range. The incorporation of Android Go in the Nokia 1 handset, and Android One in the rest of the new range and the old, will drive great adoption for people wanting to keep their phones up to date and secure.

HMD Global has not yet announced availability in the Australia region, but we’ll be talking with them this week to push for more details.

With the Nokia 7 Plus now being available for pre-order at Harvey Norman, this has made me return to Ausdroid. Australian price – $649, $100 less than listed in this article. Available – May the Fourth, Star Wars Day. The link turned up on page 7 of the Whirlpool thread discussing the Nokia 7 Plus. I can’t post the link as the Ausdroid anti-spam software actively prevents me. The link is currently NOT accessible using the ‘Pre-Order’ filter mode on Unlocked Smartphones section of the Harvey Norman site. I’m definitely getting a Nokia 7 Plus to replace my aging LG… Read more »

Definitely interested in a 7 Plus when I come off contract at the end of the year.

has all these launch dates been fully confirmed yet??

They sure have. No change at this stage.

ok one more question where did u get this info

That’s why we put the Australian launch dates and prices in.

what day in may??

I really would like to get the 8, but shame it has curved screen (I hate it on my S8 so much I’m looking at changing phones), and no headphone jack. Otherwise looks like a great phone albeit also quiet expensive.

I dreamed of owning the 8110 when it was first released. Now a revised version that uses the 4G network, at a time when I also want to spend less time “online” on my phone? And what could be better than the “banana phone” in yellow?

I looked at buying one on eBay just for fun. They are still somewhat pricey for 20 year old tech!