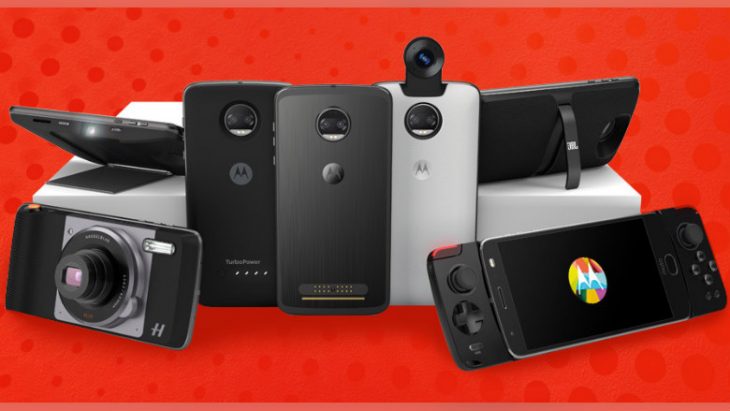 While Motorola might not have announced any new phones at MWC 2018, they are still here with a presence in Hall 3, showing off their latest devices and a number of new Moto Mods some of which were announced back at CES in January. We’re led to understand that the rumoured Moto G6 will likely be announced soon but it’s not here on show yet. Motorola acknowledges that there will be a refresh across a number of their mobile pillars this year, but refused to be drawn on speculation in the market despite rather detailed leaks having been around since last month.

Motorola’s Danny Adamopoulos referred to continued success with its budget C and E lines in Australia, which are selling through unassisted channels such as Woolworths, Australia Post, Coles and the like. They aren’t just selling well in stores, with online sales also a strong factor for Moto’s budget handsets

Moto Mods are the company’s real success story, though. The company was coy on precise figures, but said there were double figures in sales of Moto Mods online every day. New Moto Mods recently announced – including the Lenovo Vital Moto Mod and the Livermorium Slider Keyboard Moto Mod are on display here at MWC 2018, and Danny is quick to identify key markets for both.

The Vital Moto Mod can measure the user’s heart rate, respiratory rate, Pulse Ox, core body temperature, and for the first time, accurate systolic and diastolic blood pressure – all from measurement via the user’s finger. Better yet, this device outputs data in a standard format which can be shared by the user with a physician or specialist, allowing for the first time remote users to supply up to date vital data with their medical professionals. Danny’s use case? What about those in regional Australia who have conditions that require regular medical visits, but who cannot afford lengthy return trips just for simple checks of vitals? The Vital Moto Mod can address precisely this. It’s not aimed at consumers — at least, not directly — but a very useful tool in the era of connected health.

The slide-out keyboard – which gained success through IndieGoGo before attracting Motorola’s attention – is another interesting addition, and while it’s on show at MWC 2018, it’s unlikely to be on sale for a little while yet. It still feels a bit like a prototype – perhaps a bit flimsy – but it does have a good deal of nostalgia feel to it, something which other companies like Nokia and HMD have banked on in recent times.

Moto Mods are continuing to move off shelves, though. At least 32% of Moto Mod compatible devices in Australia – which includes the original Moto Z, Moto Z Play and last year’s Moto Z2 Play – have had at least one Moto Mod attached since activation. This is a figure that brands can’t always discern from sales alone, and something which Motorola’s Mods platform is uniquely placed to measure.

While there are new mods coming, the existing ones are proving ever popular, with some 12.69% of Moto Z range users having connected a JBL Speaker Moto Mod, 7.5% have used an Incipio power mod, and 3.27% have used a Hasselblad Camera mod. MWC 2018 is, in fact, brought to you by a Moto Z2 Play and an Incipio battery pack which is giving me all day (and then some) battery life while touring the congress.

Moto is identifying interesting insights into Moto Mod use, too. For example, Moto can tell that JBL Speakers are staying attached for – on average, of course – a couple of hours at a time, indicating use at parties or in the background of social functions. The Moto Projector mod, on the other hand, is typically used for up to 40 minutes at a time, suggesting that users are not using it to watch TV shows or Netflix sessions, but instead it’s being used by professionals to deliver mobile presentations.

Expect to see some more developments in Moto Mods this year, with Motorola considering alternative sales models with new Moto Z line phones to come later this year. Currently Moto Mods are sold separately, but the company is considering how they can integrate their sales with the Moto Z handsets at the time of sale. I couldn’t think of a better example of how the consumer could benefit here than bundling the Moto Z handset with a battery clip-on.

One thing is for sure. Moto Mods have answered the question on how to properly do clip-on accessories for handsets, and we look forward to seeing what they come up with next.

Ah crap. I was hoping for a release date for the G6 range. My LG G4 is draining far too quickly and getting hot so its buggered and I need a new phone. Would’ve been nice to know if I can hold off or be forced to buy another brand.

The Moto G6 is the only unreleased phone that Moto’s reps would talk about by name. It’s obviously coming, and probably in not too much time either – I think Moto’s approach is what many brands have echoed this year .. launching at MWC where Samsung is so dominant at the moment just doesn’t give other brands enough airtime.

Its a shame some of the mobile companies have bent over for Samsung. They might as well rename the even MSC18 and take their bat and ball and go home.
BTW Thanks for the continuing info from there 🙂