Mobile World Congress is the world’s biggest mobile show, and Google – as the custodian of the worlds most popular operating system – is here showing off the power of Android in the Android Garden.

Google, or rather Android’s presence at MWC is felt as soon as attendees roll up to Fira Gran Via, the conference venue hosting Mobile World Congress. The pedestrian bridges spanning the roads around Fira are covered in Android and Oreo advertising. Proclaiming Android’s dominance in the mobile OS war, and espousing updated features as part of the Oreo update such as it being ‘More Secure’, Smarter and Faster.

Google themselves DO have a booth of sorts at MWC, but it’s not open to the general public, or most exhibitors, press or attendees. It’s really just meeting rooms and a quiet place for Googlers to chill out, and partners to have meetings in. It’s still an interesting booth to check out from the outside with various portholes drilled into the side filled with displays showing off Google’s latest hardware including Pixel phones, Chromecast, Wifi, Pixel Buds, Pixelbook, Home and Home Max.

The Google Home Max display was fun with Bobbleheads set up inside showing they’re having a rocking good time.

Moving on to the main public facing promotion, the Android Garden, located between halls two and three at Fira, it spans the entire outdoor area with tables (with Google Play and Chrome coasters) and chairs laid out like a European outdoor cafe with umbrellas overhead and Android themed bins. There are also blankets on the chairs and Android themed stools here – a nod to the fact that it’s been around 0° here in Barcelona and snowed on day 2.

Starting from the north end of the Android Garden is the Android Works Factory where you can use a Pixel C tablet embedded in a pod to create a sheet of stickers, which are meant to be applied to the cute Android figure they give you to take home – a lovely souvenir – and yes we’ve got some to give away. Moving up is the Google Lens booth, where the best of Google’s visual AI is being displayed. Helpful staff are on hand to give you demos of how Google Lens works, and show what it can recognise.

Next is the pod which shows off all the great Google Assistant smart home products including speakers, lights, door locks and lots more. There’s phones in there as well as speakers. There’s also a pod where you can get closer to Google Home and see what it can do in a more homely setting.

The second half of the Android Garden gives you the Android Pin booth where you can pick up your Android WorkBook which has a list of all the Android-themed pins available at Mobile World Congress. There’s a big map showing which booths have the pins, and a list of the pins as well.

The pins are a big part of MWC now, having been a feature for some years now with attendees picking up the badges at the booths dotted throughout the conference. A strong trading community pops up in the Android garden with many people trading to get all the pins (and stickers in the passport) which allows them to pick up special Bronze, Silver and Gold Android Oreo pins – and rewards such as an Android drink bottle, battery pack and backpack. The Android Oreo (Go Edition) station, which is showing off the range of newly announced phones running Android Go is next with the demo wall – comprised of Nokia 1 handsets – showing off all the features of Android Go. Each of the six handsets announced with Android Go are featured in this booth and you can read a lot more about it here. Pin fans congregate at the Android Auditorium which was a place to relax, hang out and listen to some tunes thanks to some built-in USB-C and audio jacks that you could use while sitting down after roaming the halls. Google is also showing of VR and AR at Mobile World Congress after the big announcements for ARCore, and of course the imminent release of the Daydream powered Lenovo Mirage Solo – the first standalone Daydream headset – means that there’s a booth showing the headset and the Mirage Camera that takes VR180 photos and videos.

Finally, the Android Oreo station has the statue of the Android Oreo heroine standing out the front, and inside you can snag a ‘Cold Rock’ style smashed ice-cream with your choice of caramel, Oreo’s and other tasty treats mashed in. There’s also a hot chocolate station which, if you talk to some of the Android reps walking around explaining and demonstrating Rich Communication Services (RCS), they’ll give you a code for a hot chocolate to redeem – Snow Monkey will get you a hot chocolate filled with marshmallows.

At the rear of the Android Oreo station is a trio of periscopes where you can check out the little Androids busily building the tasty treats. 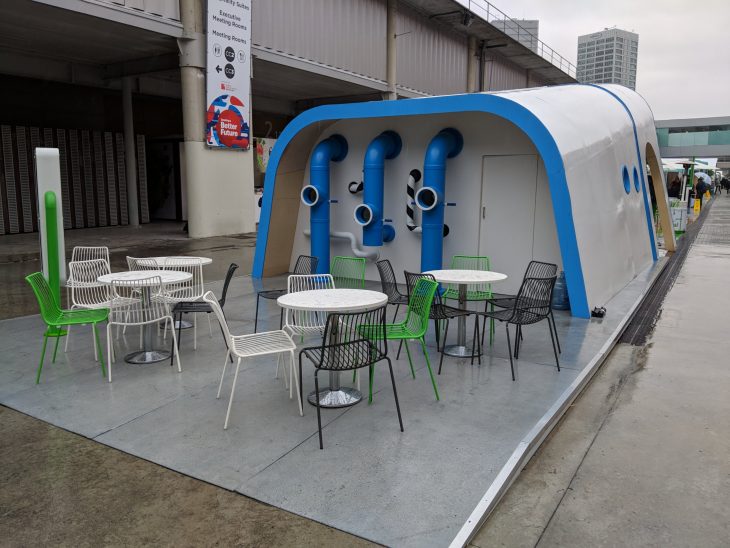 Dotted throughout the Android Garden were many Android figures, both large and small. A fun touch to a pretty awesome playground. At the satellite event to Mobile World Congress called 4YFN — which stands for 4 Years From Now — startups and eager tech companies not quite on the scale of the ‘big dogs’ of MWC show off their tech, wares and new products. Google also has a booth here featuring helpful Googlers willing to help any attendee to utilise or integrate their Cloud Platform or any other product into their business.

There’s the team of programmers behind Flutter and other developer advocates who are primed and ready to help the startups.

Come check out our booth at #MobileWorldCongress for some live Flutter demos! #MWC2018 #4YFN pic.twitter.com/r2hw9Gv5jU

The sad reality is that the Android Garden is no more. At 4pm on the 1st of March, the builders came in and completely dismantled the Android Garden, due to the fact it was built where the semi-trailers roll in to tear down and take away all the flashy stands that make up Mobile World Congress. Unfortunately they wouldn’t let me take any of the cute Androids home, but we’ll be back next year to try again. Great walkthrough of one of the most fun features of MWC.