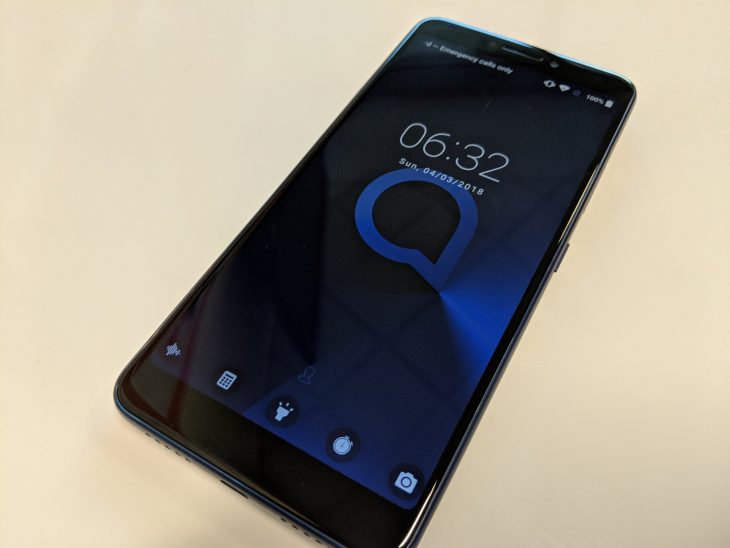 Alcatel made a pretty big splash at Mobile World Congress with their new 1, 3 and 5 series phones. Launching low to mid-range phones with 18:9 aspect ratio displays is a big move towards bringing the design and tech to the masses and Alcatel are leading that charge.

The Alcatel 3V is one of three phones that Alcatel has coming in the three series, with a 3 and 3X models also announced.

The Alcatel 3V is our focus though with Alcatel intending to bring it to Australia later in the year around Q3 for $199.

Hardware and Performance
The 3V has a massive 6″ display in the 18:9 Full Vision style, with a 2160×1080 resolution. It’s a big display, but thanks to almost non-existent bezels it seems much smaller in the hand. The screen is excellent quality whether you’re looking at it inside or out in the harsh glare of day.

In terms of speed, the Alcatel 3V has a Quad-Core Mediatek processor with 2GB of RAM and will come in either 16GB or 32GB of storage – yes it has a microSD card slot as well. The 3V has a big 3,000mAh battery inside and given it’s going to launch here in Australia at under $200 – it’s a bargain. 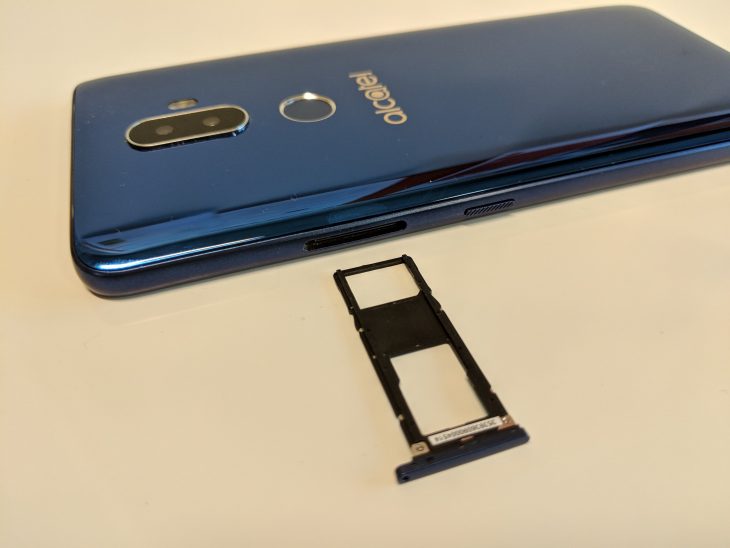 It all works well too. The speed of the 3V is pretty good. There’s a little bit of lag, but it’s minimal so you won’t be left hanging waiting for apps to load for long. I didn’t experience any of the usual lock-ups that you normally see in phones in this range, so that’s definitely a big plus.

One of the big draws for me on the Alcatel 3V is that it’s simply gorgeous – though you’ll definitely want to pick up the ‘Spectrum Blue’ colour variant as it’s simply beautiful close up. The Black is nice, but that blue colour is just stunning. 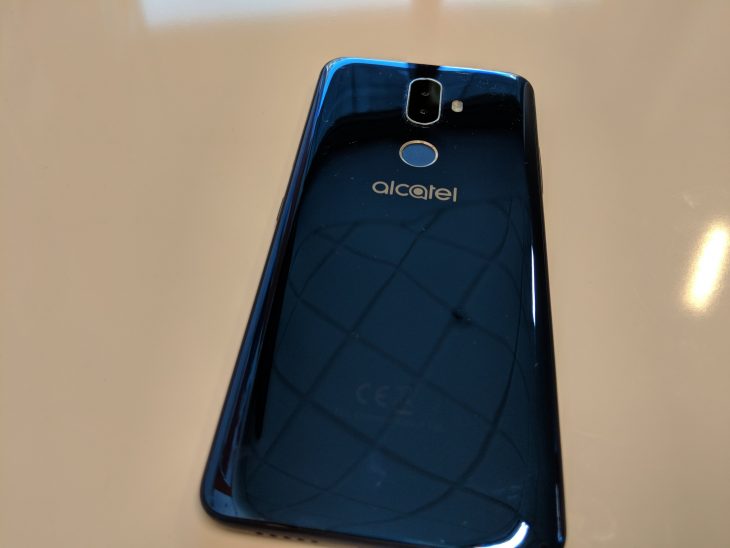 The colour is reminiscent of HTC’s liquid surface design, but it’s a metal coated polycarbonate instead of metal and glass, saving weight. It also allows Alcatel to hit a certain price point. I’m not overly disappointed in the use of these materials though, it feels good in the hand and that’s what counts.

One design feature I’ve liked across all the Alcatel 1, 3 and 5 series phones is the textured power button which has raised diagonal lines etched into it to make it easier to find and identify simply by feel. It’s not a big deal, but shows that Alcatel is thinking about the little things in design. Something we can thank hagen Fendler, Chief Design Officer, TCL Communications for as he introduced his ‘SIMGANIC’ design philosophy across the Alcatel 1, 3 and 5 series phones. 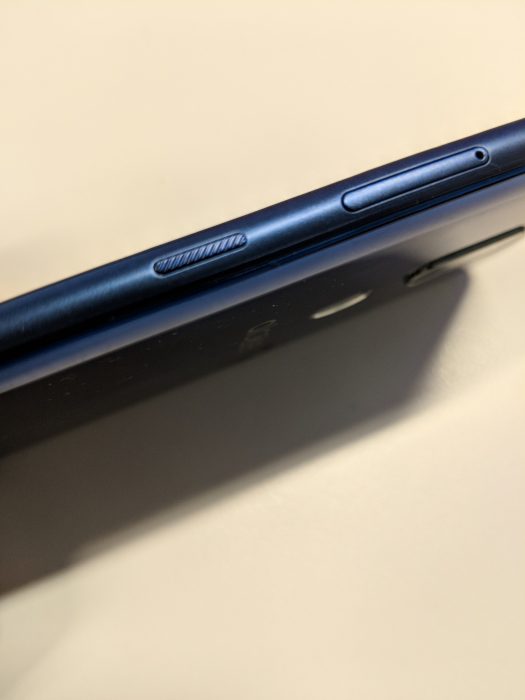 The Alcatel 3V has a decent camera included on it, with a dual 12MP+2MP rear setup and a 5MP front-facing camera that also includes an LED flash.

Alcatel is using the second sensor on the rear of the 3V to help with Bokeh effects. Alcatel says they can produce real-time bokeh effects, allowing you to change the depth of field or area of focus in post-production – and it works surprisingly well. I can’t say I use this a lot, but the inclusion is welcome. The 5MP front-facing camera is pretty decent as well.

After a few days wandering around Barcelona I’ve got some sample shots from the 3V and they’re looking pretty good. It’s an easier camera to take a fast shot on than the lower end Alcatel 1, but you still get better results by taking your time on them.

Alcatel is launching the 3V with Android 8.0 Oreo on board, meaning the handset is starting off on the right foot, and will be one of the few launches in this price category with the latest, or at least almost the latest version of Android on board.

The Alcatel 3V is running a bit of a skin over Android 8.0. It’s nothing completely overt with the launcher and app drawer mainly looking fairly stock, but when you jump into settings you can see the difference.

While they have put their own spin on Android, that’s not to say it’s completely overblown with ‘bloatware’, but it does have some apps installed like games, and utilities that are of their own design such as clock, calendar, Phone/SMS apps and more. It’s always puzzled me that companies choose to re-issue apps for this when there’s little reason to move beyond Google’s default apps – but they have, so it’s something you should be aware of.

The big security feature for the Alcatel 3V and Alcatel 5 is the inclusion of ‘Face Key’ their facial recognition software. It’s a big feature that Alcatel made a show of mentioning during their launch, so it’s strange to find so many warnings when setting it up that it’s not the most secure unlock feature you can use.

Face Key works though, and works pretty well. It takes seconds to set up and you’re unlocking your phone quickly almost every time. It takes a fraction of a second for the phone to recognise you and you’re in.

The Alcatel 3V is gorgeous. Simply being able to say that about a sub-$200 handset is something big. For the most part, sub-$200 phones are simply ok to look at being the usual featureless black slab, but if you snag a blue Alcatel 3V you’ll be quite happy.

The 3V also takes a better picture than its stable mates in the Alcatel 1, 3 and 5 series – at least as far as I can tell. It’s a bit subjective really.

The 3V also gets props for being quite responsive and would actually make quite a decent daily driver for most people. It has a big 3,000mAh battery to take you through almost an entire day and that alone is worth it for a lot of people.

The Alcatel 3V will launch in Australia in Q3 this year for $199 in Blue or Black colour options, so keep an eye out for the launch here.

Check out Package Disabler Pro on Google Play. I use the free AdHell 2 app to disable System apps on Samsung S8+ without rooting the phone.

Almost, but it is true. The Alcatel 3V feels amazing in the hand – it has the same premium craftsmanship that HTC have worked into the U11 – and with Android 8 Oreo, it’s pretty damned quick too. With an all-day battery, this phone is hard to beat, especially for that sub $200 market.