Home News and Editorial Hands on with the Alcatel 5 – it goes almost all full... Alcatel’s Mobile World Congress launch included possibly the most good looking phones in the budget range. But pushing at the upper limit of the budget range is the Alcatel 5 which is gunning for the mid-range phone market bringing with it all the good looks of an 18:9 aspect ratio screen that essentially does away with bezels.

Like the rest of its stable mates, the Alcatel 5 comes with an 18:9 display though it’s 5.7″ in size and only HD resolution – a strange choice given the 2K display on the lower end – and lower priced Alcatel 3V. It’s a good screen though, and while it’s lower resolution it almost completely takes up the entire front of the phone.

The Alcatel 5 has almost no chin on it, and no side bezels. The phone does have a bit of a high forehead though with a large bezel at the top.

Alcatel has made good use of the top bezel though, inserting dual front-facing cameras in there. The cameras are 13MP and 5MP, with the secondary 5MP sensor behind a 120-degree super wide-angle lens for taking the best group shots. The rear camera – a 12MP sensor – isn’t bad either taking some decent shots.

The low screen-to-body ratio means that like the rest of the new Alcatel range, it’s easy to hold. Again, the Alcatel 5 has that nicely textured power button making it easy to find without looking. The body of the phone is from all appearances brushed metal, however it’s in looks only with the body made up of a metallic look on a plastic shell. That’s not to say it doesn’t feel premium though with the Alcatel 5 feeling very nice in the hand, but without the added weight of a metal unibody. Inside the phone you get a Mediatek processor – an Octa-Core Mediatek MT6750 this time, with Alcatel intending to offer two configs of the Alcatel 5 – either 2GB/16GB or 3GB/32GB – and again it will take a microSD card for expanding your storage. 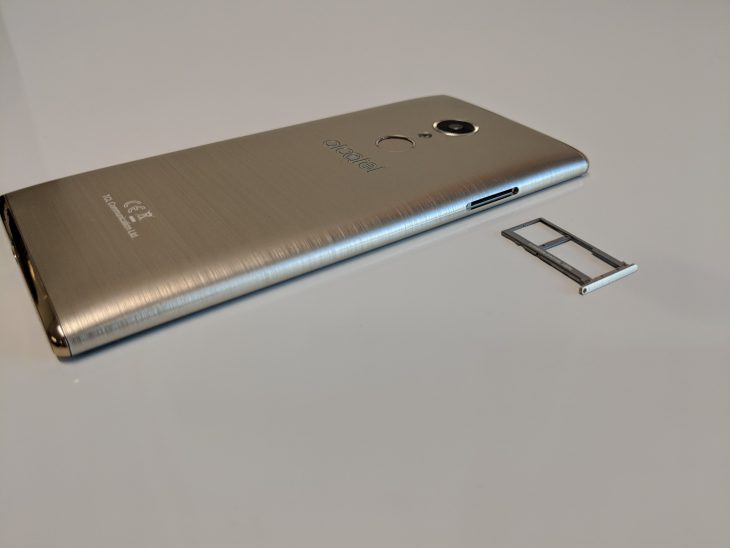 A 3,000mAh battery keeps the phone running, and given the HD resolution of the display it should last you a full day of use. I’ve not had a SIM in it as yet, but based on its battery sipping while simply connected to Wi-Fi, it’s a promising start.

Also included on the Alcatel 5 is a rear mounted fingerprint sensor, it’s fast to recognise your fingerprint and with Face Key – their newly announced facial recognition tech – also included it means you have a couple of ways to unlock your phone in addition to the usual swipe or pin options.

Alcatel has also added in the option to use the fingerprint sensor as a selfie shutter key, or you can program it to launch different apps or services based on which finger you scan to unlock it. It’s not a new feature, but it’s handy, and works pretty well. 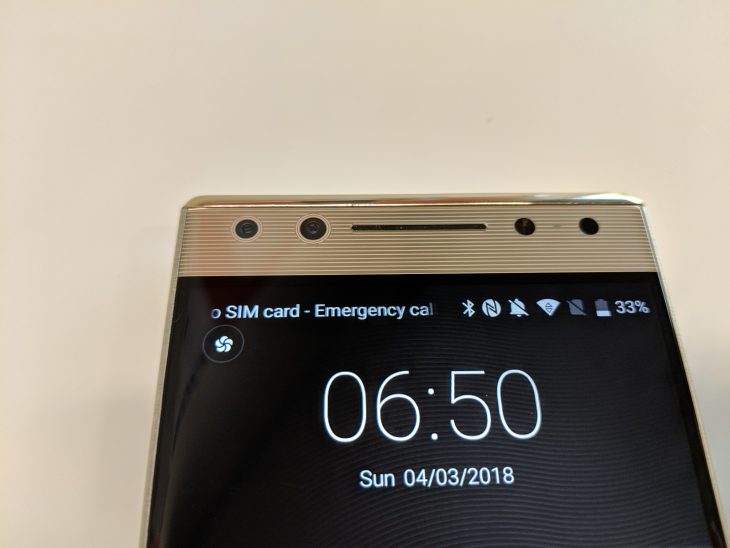 Alcatel has included a 3.5mm headphone jack in all three of the phones they’ve released this year. The Alcatel 5 has some pretty decent speakers as well with dual grilles at the base of the phone either side of the USB-C port they use for charging. They’re suitably loud, but as with any phone they’re limited by their size so you aren’t getting ‘great’ sound, buy they’re perfectly serviceable.

As above, the phone has a single 12MP rear camera sensor which is pretty decent when it comes to taking a photo. The phone has dual sensors (13MP+5MP) on the front though, with the implied emphasis on selfies.

The magic of the front camera on the Alcatel 5 is in the software with the phone able to detect when there’s more than two faces in frame and switch to the wide-angle lens to let you capture your whole group of friends in one shot.

A ‘Social Square’ mode is also included in the software that lets you see what the shot you’ve just snapped in the lower half of the screen to ensure you got your best angle, that also automatically creates a collage for you. There’s also a photo booth mode that snaps four shots – 1 per second – allowing you to quickly create a fun shot to share.

I’ll say right off the bat, I’m not the target audience for selfie shots. I don’t really see myself utilising this new feature very much beyond the testing phase. I’ll just tell you to get off my lawn and move on.

The rear camera though is quite good. It’s a 12MP sensor and it delivers a decent shot. It does require a bit more care when you’re taking a shot to get the best out of it though – but that’s a common theme for most of the low-mid range camera phones available these days.

The Alcatel 5 is undoubtedly the higher priced, and specced model of their range, so it’s a confusing decision. We’ve asked Alcatel for clarificaion on why, but for now, it’s something to take into account.

Like the Alcatel 3, the Alcatel 5 is pretty good in terms of skin. The Alcatel software modifications are relatively light, the Settings Menu is a little more heavily skinned than I’d like, but the main home screen, app drawer and notifications are all pretty much what you see in stock Android.

There’s a few Alcatel apps installed, with their phone, SMS and enjoy.now app all there, as is a Super Cleaner app which includes AntiVirus, Junk Files cleaner and ‘Phone Boost’ which I feel is very much not required – but it’s there. There’s also a few games pre-installed.

Alcatel’s Face Key is also included on the Alcatel 5, it works pretty well for me though I’ve seen issues with people and glasses etc. so it’s a case of your mileage may vary. Still, if it fails, or you choose to use a more secure option you can always use that fingerprint sensor on the rear.

One thing I do like about the Alcatel skin is the inclusion of ‘Joy Touch’ in the Smart Assistance Settings. It’s sort of like Pie Control or many of the other clones you find in roms or in Google Play. It allows quick access to apps or functions like snapping a photo quickly.

The Alcatel 5 has a lot to offer when it comes to a mid-range phone. It’s pretty fast to use with the Octa-Core processor able to handle most of your day-to-day needs, and it’s got a decent camera.

The most glaring omission, or downfall is that the phone comes with Android 7.0 rather than Oreo like the rest of the Alcatel phones announced at Mobile World Congress. Alcatel will be doing updates to the phones throughout their life-span, so an update to Oreo may be on the cards, it’s just confusing that it’s launching with Nougat.

As far as looks though, for anyone who just cannot abide bezels, the Alcatel 5 is possibly one of the best options at this end of the market. With a bit of a forehead it’s still got bezels, but Alcatel has made good use of this, packing in dual cameras.

Alcatel will be launching the Alcatel 5 in Australia later this year, and beyond the software my only concern is that another company may start offering a similar, almost bezel-free phone in the meantime stealing their thunder. It’s a great looking phone and I hope it comes to market ASAP.

Seems at least slightly odd they wouldn’t have gone for the Android One program for a phone like this – seems the perfect candidate!

Agreed. As we saw with Nokia (HMD) there’s nothing stopping them converting it over at some stage.