Often leaks and rumours need to be taken with a grain (or a mound) of salt but when the leak comes in the form of a teaser from the manufacturer you can be fairly certain it is real. We have seen m any OnePlus leaks and rumours and the latest has been revealed by OnePlus themselves via their Twitter account.

Overnight OnePlus has posted an image on their Twitter feed in a manner which they have done in previous years with the new phone partially (well, mostly) obscured underneath. While we can only see one side of the device there are a few things we can ascertain from the image.

More immersion in a refined form factor. Are you ready for the #OnePlus6? pic.twitter.com/2HR2YE5Jb6

The OnePlus 6 will also have the antenna lines at the side of the phone just like on the 5T but not on the rear of the device. This time though we see that the alert slider has been moved from above the volume rocker on the left hand side of the device (and over to the left when matched with renders leaked the other day). 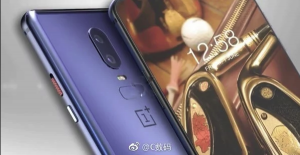 The sim card slot has been widened moved to above the volume rocker to accommodate the alert slider move. The wider sim slot is most likely for the dual sim/microSD slot while taking less room into the device.

Although rumours have the OnePlus 6 releasing on the 5th of May we have also seen credible rumours of a 25th April release. We think it will be an April 25 announcement at least because that is when the new Avengers movie is released and OnePlus do have an Avengers: Infinity War special edition OnePlus 6 in the pipeline. It makes sense to coincide the release with the movie release and build upon the hype of that.

The OnePlus 6 is shaping up to be a fantastic device but is very unlikely to be sold here upon release (and possible never). If you are interested in purchasing one we will be scoping out the best (and most reliable) grey market importers who will be selling the device. If you cannot wait that long start firing up the mail forwarders as that may be your only other option.

Will be watching this. Wondering if this will be routinely followed by a 6T ? (and when, and quite what the difference will be … )

Just be aware that with no local release their will be no HD calling, VoLTE or VoWIFI services available for this phone as these rely on carrier integration. This is not a OnePlus specific issue, its the same for any OEM imported phone. If you rely on any of these for a good call reception, such as inside a building or further west then it may not be a suitable selection for you. City dwellers are usually fine but its an important factor for some ~ OnePlus 5T owner.

This is all new territory for me. Does this sort of issue also apply to phones that may have been integrated with, say, Telstra as a carrier but then are moved across to an Optus account? In this scenario, Optus, of course, don’t have this particular phone ‘on their books’.

What does ‘carrier integration’ actually involve?

For Android handsets, VoLTE requires Telstra firmware on most devices…. Not sure about Optus.
References:
https://whirlpool.net.au/wiki/telstravolte
https://yescrowd.optus.com.au/t5/custom/page/page-id/tp2/VoLTE-support/wifi-calling

Not sure that is 100% accurate. I have an Essential PH-1 and have/had VoLTE and HD calling with Telstra and HD Calling with Vodafone.

The option to enable 4G data does not appear on the OnePlus handset even thought it does this by default. However when you make calls it drops back to 3G which tells me VoLTE is not working. The option for Wifi Calling is also not available.

There is no option for VoLTE or VoWifi on the OnePlus handset. It does use 4G data by default but drops back to 3G on a phone call and the data stops when this happens.