Every manufacturer wants to find the next big thing, the next trend and Xiaomi are throwing their hat in the ring with the release of a phone dedicated to gaming. We have seen the Razer phone last year and tonight at an event in China Xiaomi have announced the arrival of their Black Shark Gaming phone.

The Black Shark has a 2160 x 1080 resolution 5.99 inch display. The display goes to a brightness of 550 nits and has a colour gamut that goes to 97 percent. Powering this is of course the Snapdragon 845 and will arrive with either 6GB of RAM and 64GB (UFS 2.1) of storage or 8GB and 128GB variants. There are also smart speakers giving a “near-surround experience”.

Specs like this of course will use a heap of juice: luckily it has a 4000mAh battery to keep it running. There is a USB-C port to charge it and it does support Qualcomm fast charging.

Not only will all this power use a lot of juice but will also create a lot of heat. The Black Shark uses liquid cooling system which allows the processor to run 8 degrees cooler during gaming.

To add to all of this high end hardware Black Shark have manufactured a gaming controller that attaches to the phone giving it hardware controls for gaming. The controller is not limited to just this device either and is compatible with other phones with Bluetooth 4.0 and above.

The phone is not just for gaming and is designed to be suitable as a daily driver and as such houses a 12MP dual rear camera system with one a wide-angled f/1.7 aperture. The selfie camera is a 20MP camera, sure to be able to produce some decent PIP gaming videos. There is also a dedicated image processing chip from Pixelworks for image enhancement, image processing and improved video quality.

The phone will run Android 8.0 Oreo and will include a dedicated hardware button called the SHARK key for a high performance gaming mode. 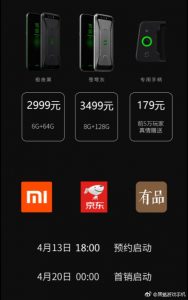 Of course this will not be sold here like all other Xiaomi phones but that does not stop many from importing their phones. If you are after a high end gaming phone for a very attractive price you will have to look out at one of the many grey market importers.

If this the next frontier for phones? A decent gaming phone that doubles as a high end daily driver? Would you buy one?

Sounds like a cool device I look forward to seeing some reviews.