Analytics company Open Signal has today unveiled their Australian Mobile Networks report update for April, with some new statistics showing the state of the mobile landscape in Australia.

The report is based on data gleaned from the Open Signal app which is available on Android and iOS, with measurements for this report, which ran from the 1st of January to 31st of March, taken from over 22,000 devices in Australia.

The report covers the three main carriers in Australia – Telstra, Optus and Vodafone, showing their conclusions on which network has the best 3G and 4G network speeds, latency and availability. The 4G download speeds from all three carriers are excellent though when you consider them on a global scale, with Vodafone’s almost 40Mbps average speed 23 Mbps faster than the global 4G average of 16.9 Mbps.

In terms of latency, the delay data experiences as it makes a round trip through the network, Vodafone also had great results, taking the crown with a low 30.3ms, while Optus came a close second with 32.72ms and Telstra came in third with an almost laggy 38.15ms. 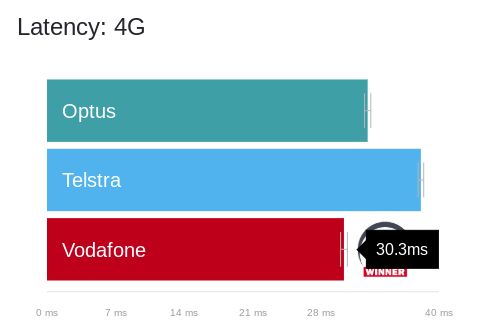 For 3G users, Optus and Vodafone drew on both speed and latency in the report, with Telstra coming third.

Overall, we have it pretty good here in Australia when you compare us to the rest of the world. It’s an interesting look at the state of the LTE and 3G networks, but obviously your mileage may vary. If you want your experience taken into account, install the Open Signal app and see how it goes.

I question that finding. I am with Vodafone. Travel to Melbourne via train everyday. 80% of 1hr travel from Hallam to City (and vice versa) is at HSDPA. Frequent notification that I have no connection. This idle time is when I want my mobile Internet to work the most and it doesn’t. The experience is so bad that I have to stop reading news and listen to music instead. I reached out to Vodafone and they tell me that they are upgrading their network in that corridor. Problem is, that is the answer they have been giving me for the… Read more »

Your mileage may vary. If you want your experience taken into account for the next report, install the app.

Vodafone can be a real mixed bag; there are places around Sydney where my phone falls back to HSPA (or plain old 3G) and, for some reason, some phones when dropping from 4G to HSPA have real difficulties in getting data to flow. I’ve noticed on the S9+ that when it drops to HSPA, in some cases I need to turn flight mode on, wait, then turn it off before 3G data will actually work. Full disclosure, though, I’ve found the same on Telstra too, and Optus. If 4G was everywhere I’d be so much happier, because 3G is such… Read more »

Call the Telecom Ombudsman (TIO) and explain your situation. I can guarantee you will get out of your contract without a “termination fee”. You will pay what you’ve used so far in the month and anything you owe on the handset, if you got one. Otherwise nothing on the service contract. Little known fact, Telcos are not allowed to charge exorbitant termination fees that amount to penalties under the Australian Consumer Law.