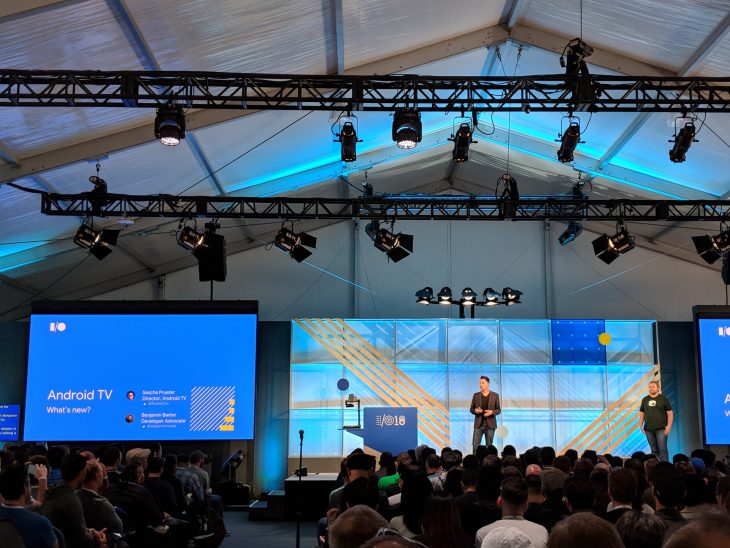 At Google I/O we didn’t see anything about AndroidTV in the keynote, but at the ‘What’s New in Android TV’ session run by Sascha Prueter, Director Android TV and Benjamin Baxter, Developer Advocate they announced new features and improvements coming to Android TV with Android P.

The session started off with some numbers, with Sascha announcing that the Android TV ecostystem has grown 2-fold Year-over-year, with more than 100 Partners across Smart TVs, Set Top Boxes and PayTV Operators around the world, there’s around 30 Partners shipping boxes with Android TV with more than 50 on the way. The app ecosystem is growing exponentially as well with growth from 25 apps in 2014 when the platform launched to more than 3600 apps available now.

But enough about that. What’s new in Android TV in Android P? The key features for Android P on Android TV is performance and usability improvements. The Android TV team has been focusing on making the performance on Android TV devices better even on lower spec devices. This is being achieved both behind the scenes with Android P and at Google I/O they’re talking with developers about new ways to utilise tools like Android Vitals and app management to do it at a local level.

Google is also cognisant of issues surrounding Android TV setup, they’re making it easier to setup a new device with better mobile support so that a nearby phone will now get a notification to setup a TV account. There’s also going to be less pain with apps, when you login to a new Android TV you’ll be presented with suggestions for apps to install based on ones you’ve previously installed on Android TV and on apps that you’ve installed on other devices that have Android TV equivalents.

Logging into accounts is also getting easier with Autofill with Google activating on Android TV, so now if you’ve previously entered credentials for an app on another device, you’ll get your credentials filled in automatically. The configuration is also getting much easier with Google intelligently surfacing settings you need. The platform will recognise if you installed an app that requires a certain setting and suggest that to you in the settings menu. The Settings menu is also going to be more streamlined.

Finally, Google Assistant is going to start rolling out to more Android Devices in countries outside the US with a bunch of countries listed including the UK, France, Germany, Korea, Japan, Canada, Italy, Mexico, Netherlands, Spain, Australia and more.