Google Maps is a massively transormative technology that has changed our way of navigating the world. Since launch, Google has mapped over 220 countries and territories and is helping more than 1 billion Maps users. At Google I/O, they’ve outlined the next new features for Google Maps making them smarter and more detailed.

In Maps, Google will begin adding in the ‘For You’ tab to the Maps UI. The For You tab will help you to stay on top of all the happenings in the area around you, whether you’re in your own neighbourhood or travelling. The For You tab is designed to surface information about new places that open up, or a ‘surprise pop-up from your favourite chef’ and more using information from local experts, Google’s algorithms, and trusted publishers.

Google has also introduced a new feature called ‘Your Match’ which is a score that tells you how likely it is that you’re going to enjoy a place you find on Google Maps. The score is generated by utilising Machine Learning and outlines the reasons explaining why it thinks you’d enjoy that place such as ‘you enjoy Greek food’ and it’s similar to another restaurant you’ve visited and liked, as well as giving you the score. 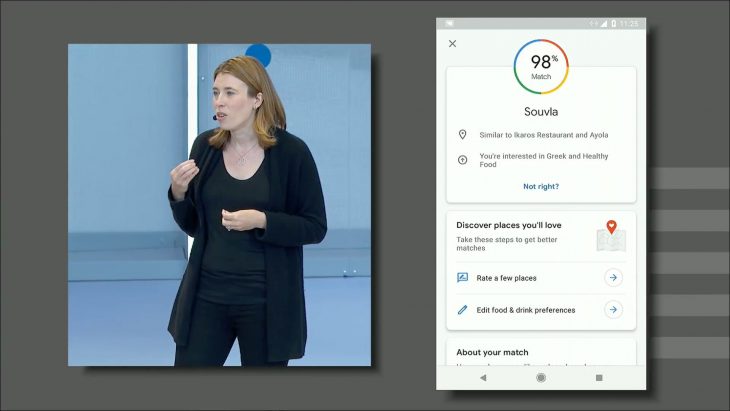 Google has developed these new technologies to help you to find more to do, but what if you’re going out in a group? Google has thought of this and has added in Group Planning tools. Simply long press on a few places you think everyone would like to eat to create a shortlist, then share that list with your friends and family who can also add their favourite places. Once everyone has helped compile a list of places to visit, the entire group can then vote in real time to find everyones favourite place.

Finally, Google is also launching new tools to help you get around in Navigation. They’re using two ways to do this, including expanding their VIsual Positioning System (VPS) technology they launched with Project Tango, bringing it to all devices and a new Augmented Reality view using your camera.

The new AR view will overlay your Google Maps navigation directions over the camera view, showing directions, street names and even overlaying business names and information cards about them. Google has also been toying with a new animated ‘Guide’ to help you get you where you’re going.

Google is also utilising VPS to take visual cues such as landmarks and features seen by the camera to improve navigation. VPS will help Maps to figure out where you are, what direction you’re currently pointed in and then help you get where you need to go. The For You, You Match and Group Planning tools are coming to Maps on Android and iOS later this summer, but Google hasn’t yet announced when their AR and VPS navigation features are coming, but we’re hoping they’ll be coming soon.

To make the Tango originated AR VPS Guide work, will Google be redoing the StreetView in cities, from the footpaths?