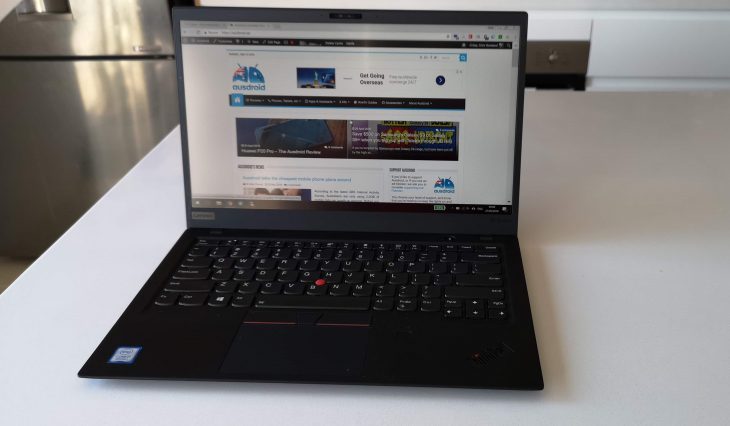 Lucky me. I’m reviewing what I can only describe as the best laptop I’ve ever used. We don’t often get the chance to review laptops at Ausdroid, but when I found myself in need of something more capable than a Chromebook recently, I started looking at what was around. I couldn’t have been more disappointed with the assortment of laptops on offer at our major retailers, and so I did some research online and sought recommendations from friends.

Enter Lenovo’s ThinkPad X1 Carbon, which just might be the best laptop I’ve ever used. I’ve said it again.

I tend not to be one of those tech journalists that declares anything much the best anything, because I think it’s a bit sensationalist, and often it’s not quite true.  I’m happy for company people to call their products the best ever, because that’s marketing talk. For a reviewer to call something the best, it actually has to be, and that view has to be defensible.

Here, I’m happy to make that claim. I’ve used Dell, HP, Apple and Lenovo, and Chromebooks from Google, Acer and a couple of others. I’ve had many laptops over the years, and used quite a few more. I was quite fond of my Apple Macbook Pro for many years, but Apple slowly lost my interest; somewhat limited software choice, annoying quirks, and stupidly expensive replacement costs. Apple’s new gear is very expensive, premium even, and too expensive (I think, anyway) for what it is.

So, when I found myself in need of a new laptop from which to run Ausdroid, to join me on my commute, to use at work, and to take on overseas trips, I sought recommendations for what was the best. Most people were saying Lenovo, and so I asked Lenovo to send me what they thought was their best so I could take a look.

Over the next few weeks, I’ll be finishing up a review of the Lenovo ThinkPad X1 Carbon. This particular one has the following key specs:

From initial impressions, you can see what I think above, but this thing screams. It boots as quickly as ChromeOS, has two Thunderbolt USB-C ports alongside full-size USB-A ports, and runs just about any app you could want it to. Perhaps it’s a touch of overkill for Ausdroid – which is predominantly web-based activity – but for other work I do, this thing is simply brilliant. It has an HDMI port built in (so I don’t need to carry around expensive port replicators to work at a desk), and with Thunderbolt, it can drive two huge external displays, join a wired network and more.

So what, you might think. That’s just what any laptop can do really, and so it is.

However, this laptop does it better. I can spool up a virtual machine so I can test code in a sandbox environment, and have that running while watching YouTube tutorials on another screen, and encoding a video stream in another process. Apart from the fan spinning up because things are getting a little warm, you simply wouldn’t know the X1 Carbon was under load. It stays responsive regardless of what you’re doing.

Run up a couple of Linux apps on the Google Pixelbook (which I’ve been using for the last few months) and it chugs. Encode a video, and you can forget about it being useful (and the apps to do video editing on ChromeOS are garbage). The Mac Mini I had been using as a desktop is a complete slouch next to this .. it’s not too much to say that the X1 Carbon has set a new benchmark for speed, and it has probably ruined me for any other performance machine.

I look forward to writing some more words as time allows to flesh out a more fulsome review, but in the meantime, you can know that the finding of the review might already be written. If you have a bit of money to spend (these Lenovo ThinkPads are not cheap), this is the best high-end laptop you can buy today, bar none.

Stay tuned for a fuller review in a couple of weeks, and if you’ve got any questions do let me know so I can look into them!

Wait for your full review. I am looking for a windows laptop to switch from my Macbook Pro 2015. Your review certainly interests me as I am looking into Thinkpad Carbon among others. Do you have the one with the HDR screen? Would be interesting to know your experience regarding the battery life. I read in one review that they tend to heat up and get noisy under heavy load. Have you ever felt uncomfy using them on your lap while doing CPU intensive work? Cheers.

I switched to the gen 4 x1 carbon from a 2015 MacBook Pro and the x1 is way way better in every regard, I have the 2k screen which is a matt screen. The reviews I’ve see of the gen 6 with the higher resolution screen have been extremely favourable, with best as of today colour accuracy on any laptop, battery isn’t as good as the HD version but it’s still very reasonable. Main takeaway for me is the matt screen, build quality, weight, amazing keyboard, built in sim, windows 10 is actually very very good after a short period… Read more »

What’s it like running Photoshop and other graphics intensive programs?

I need to get Photoshop installed on here tonight to fully check it out, but it’s handling other intensive tasks pretty damned well.

I hear you, migrated from expensive and overrated Apple laptops to the Gen 4 x1 carbon in 2016 and it is still my favourite laptop bar none, the matt 2k screen, Sim card for instant connectivity, the keyboard and battery even after 2 years still impresses.

Can’t wait to hear more of an in depth review.

Sadly the review unit doesn’t seem to have a WWAN card installed, but that I’m not too worried about; I don’t have a second SIM that I’d want to use in it anyway. It’s easy enough just to tether to my mobile which has 52GB a month on it anyway.

Everything else you’ve said I can echo, though. It’s simply brilliant.