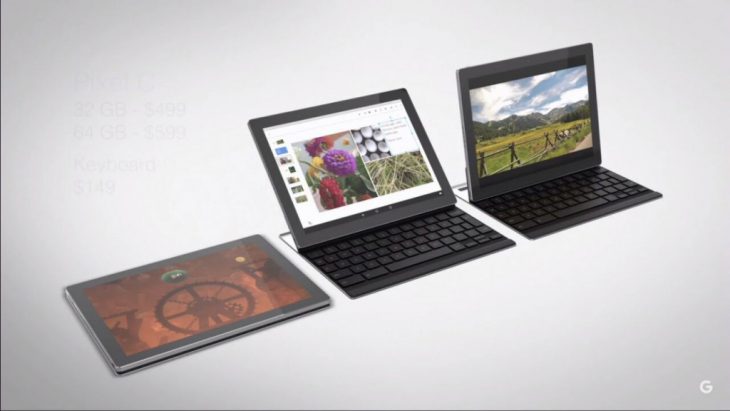 Oops we had a bug when we updated the site. It's back up now. Sorry for the confusion! https://t.co/5mI3L3Gzif

Not since the Pixel C has Google shown any intense interest in tablets, but now almost three years after it was announced Google has apparently given up any pretense of caring about tablets, removing the category from the Android.com website.

The navigation bar on android.com is now bereft of a Tablet category and as pointed out by Android Police, you can now view information about Android running on Phones, Wear, TV, Auto, and even check out Enterprise options – but not tablets.

Android on tablets has been a hit and miss affair since the early days of Android. Samsung jumped the gun with the original Galaxy Tab which simply ran Android as designed for phones before Google brought out a tablet specific version of Android with Honeycomb…which was terrible.

Google somewhat recovered a little ground in the tablet wars, but developers have never really embraced Android on tablets for their apps.

These days, even at their fireside chat recently at Google I/O, the Android team seemed somewhat loathe to give a clear idea of what was on the cards for Android tablets. You can see this here:

It does seem that the focus has shifted towards Chromebook running Android apps, or more recently Chrome tablets running Android apps – but neither of the manufacturers who have announced Chrome Tabs have any plans to bring those to Australia just yet. So, where does that leave us? Well, at the moment, there are still thousands of tablets out there running Android, but we probably need to hear something official from Google on this one on what their plans are for tablets and Android.

I still use my Nexus 9 every day, I’ve often wondered what I will do when it dies.

Only thing which comes to my mind would be possibly look at a Samsung 9.7in tablet, as their screen ratio is the same as what the Nexus 9 has.
Samsung Galaxy Tab S3 9.7in 4G T825
– http://www.samsung.com/au/tablets/galaxy-tab-s3-sm-t825/SM-T825YZKAXSA/

What made tablets a failure was the lack of attention from Google. App devs weren’t required to make their apps play nice with landscape mode, much less the UX screenestate of a tablet in either portrait or landscape. Google removed the Tablets category from the Play Store app. With a dearth of good apps, that make full use of the screen capabilities of a tablet, an inability to easily actually find tablet apps, and the corporation which the genreal public regards as being behind Android; Google; not caring about or for tablets, Android tablets look to be headed for a… Read more »

So the iPad is doomed?.. Rather I think Google has realised it wasted money on the tablets and could not produce decent quality ones. So might as well get out and let Samsung do it’s job

It’s the right choice. A ChromeOS tablet would be better in every way.

Why would a ChromeOS tablet be the better choice?

I have loved the Android experience and supported it since it was the underdog.
I particularly like android that came in the form of Nexus and now Android One.
My goal this year is device minimization and OS ecosystem consistency. I was thinking of the Samsung Tab S4 but fear it may not get much love and support upon arrival in 2018.
I am now thinking the Motorola Power One plus a 2-in-1 Chromebook (HP Chromebook X2 or Pixel).

Bit of a shame really , I have often threatened to replace the old tablet I have kicking around somewhere for household duties .. I did have a Galaxy S3 picked out for a while . But as mentioned , tablets don’t seem to get much love , I think a new model Galaxy S4 was released overseas , but I don’t think that has come across the pond to us yet ? Or it may have, I have not kept track or seen one on the shelves in electronic stores. On occasion you do hear in comments how an… Read more »

As far as I can find online, the Samsung Galaxy tab S4 has not yet been released. Back in February, prior to MWC, the guesstimate was September or October for an EU/UK release.
What that will translate to for Australia, I think your guess would be as good as mine.
Right now, my Samsung Galaxy Tab A 10.1 (2016) 4G with S Pen P585 is working well.