Oppo’s Find X is causing a bit of a stir around the traps, with official teases, and some leaks dripfeeding the keenly interested masses with more and more information about the phone. Today we’re seeing a leaked spec sheet for the phone, as well as an About screen which shows an interesting tidbit.

The Find X has already been officially teased with a Snapdragon 845 processor, 8GB of RAM and 256GB of storage, however this new leaks shows that there’s likely a second storage variant, one with a mere (hah, mere) 128GB of onboard storage. The phone will be powered by a fairly substantial 3,730mAh battery that will support Oppo’s proprietary fast charging technology Super VOOC.

In terms of software, the phone is going to run Android 8.1 (Oreo) with Oppo’s ColorOS 5.1 on top. There’s also somewhat of a ‘dodgy’ leak – also from slashleaks – of an About Screen for what’s reported to be the Find 9 listing the version of Android as Version 9, which we know is Android P. 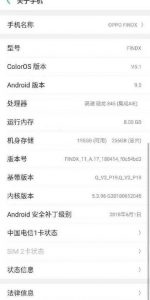 Oppo has been working with Google on Android P with a Beta available for the Oppo R15, though nothing has been said about the Find X. It’s possible – even likely – that this is a hoax, but with Oppo’s stock Android build: Project Spectrum now dead, it’s nice to think there could be a stock alternative available.

Oppo is set to launch the Find X at an event in Paris, France on the 19th of June, so we don’t have long to wait to find out if these specs are the real deal. If they remove that fascist ColourOS “feature” where you cannot choose your own launcher or your own SMS app then the OS might be usable. That HAS to be removed. Still waiting on a ColorOS update to remove these fascist features from my wife’s Oppo Phone !

You’re being a bit over the top. Fascism describes a dictatorship and system of governance characterised by extreme and radical nationalism and authoritarianism where severe degrees of governmental control and suppression are used to extinguish any form of opposition to those ideals. How can you seriously draw a parallel between an extreme and radical system of governance and freaking phone with a couple of design choices you happen to disagree with.

Fascist ideals have given rise to wars and genocide. Do you really think your first world problems are even remotely comparable?

Have seen others comment on the very same topic of oppo not allowing users to customize/change the launcher.
Seems like a fair critisism to me.

I also agree that ColorOS should be updated to allow a user to choose their own texting app and launcher. But describing it as fascist is ridiculous and insensitive to those who have lived in countries where fascism existed or where those ideals still persist in political movements. So the OP dropped a few hundred dollars on a phone that isn’t what he expected. It sucks, I agree, but shit happens. His future purchasing decisions can be informed by this experience. If he were truly a victim of fascism he would have no way to freely comment on this issue,… Read more »

Well perhaps a poor choice if words in the aforementioned post ?
However i do think he is just trying to make a point with some colorful expression ,
I would not take offense by it my friend , i do not believe any was meant . .
Have a good day mate.

Look, Ty Quinn, Android from the very start is all about CHOICE – if you want a phone that tells YOU what to do – get an Iphone. I specifically chose Android to allow ME to decide what I want to do with MY phone. Yet ColorOS abandons one of the key tenants behind the birth of Android – CHOICE. I am amazed that Google doesnt pull the plug on their access to the Google Play Store (they should) until they remove this ‘feature’. Its a FASCIST feature that should be removed and I deliberately used that language as its… Read more »

Looks nice but the OS is a no go.

Damn, they are building some real hype with this phone. It might even be my next phone

Dont consider it unless they have addressed the serious flaws in their crappy fascist version of Android – ColorOS.

People buy budget Chinese phones because they are excctly that, don’t complain when they don’t live up to perceived expectations. Also the product is designed for Asian markets where tastes are different and Chinese consumers where restrictions are the norm, live with it or buy something else.

ColorOS is brilliant. Stock Android is Blah. Oppo are awesome phones for the money even cheaper now with new models coming. Find X will sell millions but not enough for me to upgrade. My R11S+ will be more than adequate till 2020 and beyond when 5G becomes mainstream.

You are the only person to give it a positive rap. I’m keen to get away from it.

RickO – An Oppo employee I suspect

Oppo rocks. If any of you actually own one you’ll know how good they are. Best value phones around.