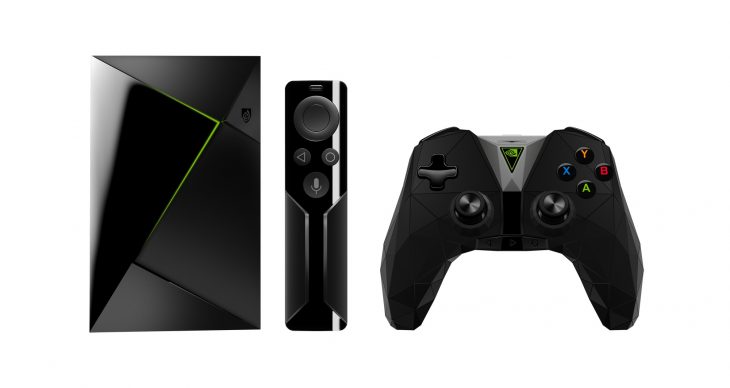 We’ve been watching Android TV gain momentum in Australia for a while now – TV manufacturers, broadcasters and telcos are embracing the platform with dedicated hardware releases, but one of the earliest and best-regarded solutions has escaped us all along, until now. Nvidia sent word this afternoon that it’s finally – finally – going to release its Shield TV set top box in Australia in July.

Nvidia’s going after the 4K entertainment market, pushing the Shield TV not just at streaming media but also (unsurprisingly, given their heritage), at gamers. The device lets you bring your PC gaming to the big screen with support for Steam’s Big Picture mode and like all Android TV devices ships with game controller support.

Ali Kani, general manager of Shield at Nvidia, had this to say about the product:

The device has been on the market overseas for some time. To say we’re been waiting for this for a while is an understatement. It seems Ali got our emails, too:

We received countless inquiries from the Australian market dating back to when
SHIELD first launched, and we can’t wait to meet the demands of our most passionate fans.

(thats us – well, some of those emails were from us…)

Nvidia also has a pretty good track record in keeping the Shield software up to date with the latest Android TV releases, and of course you get access to the Google Play store’s curated library of Android TV software and games, besides Nvidia’s own offering. You’ll also get the Google Assistant.

Shield TV comes in at the higher end of the Android TV set top box market, but comes with either a remote ($249) or a remote and a game controller bundled with it (no price supplied yet, but it’ll cost a little more). You’ll also be able to buy additional controllers or a stand to keep the unit upright if that’s your thing.

You’ll be able to buy Shield TV direct from the Shield website (which doesn’t seem to have opened up for Australia just yet), or from EB Games and a large number of Australian PC retailers like PC Case Gear, Umart, Mwave, Centrecom, Scorptec, PLE Computers, JW Computers, Austin Computers, and Computer Alliance.

I have a new model Shield TV bought through Amazon last Christmas.
Very happy with performance
Using it to get 4K 60hz video to my TV.
What I really want now is for the Nvidia Shield to get “FreeView Plus” then I can ditch my TV Antenna.

PC case gear had this up on the website for half a day:

Now, if only they’d put some Gamestream servers in Australia as well, sadly, even on a 100mbit business fibre, Gamestream is pretty much unusable here. Also, don’t expect this as a gaming device, the selection of games for it is abysmal, even after so many years. It is, however, great for streaming media and streaming games from a high end Windows PC.

G’day, I purchased my Nvidia Shield pro (500gb) just after the launch on Amazon US, I wanted the remote control as well. Now buy the time I added shipping costs it totalled about Au$480. I must say at first she loaded up, it worked great so fast it’s not funny. But the OS is not full Android so the play store is not the full store. There are a lot of incompatibility with apps, that’s a shame.. Also the shield slows down when you have a lot of apps installed, so boot it up a half an hour before you… Read more »

The Shield is running Android TV. The reason that the store ‘is not the full store’ is because it requires apps to be updated and work with the TV interface + gamepad/remote input. If the store wasn’t limited then it would be full of apps which were incompatible with the TV because it was a touch only app

Yes that’s what I said… I’m telling others that don’t know that..

Finally. Though I do wonder if most of us dedicated fans have already al imported one given how easy it was.

Of course this might get folks like the ABC to actually support the device which would be nice.

Can anyone shed some light on whether the Shield operates as a Cast device through Google Home? Seems the internets presents mixed opinions of its effectiveness as a Chromecast device.

As an Android TV device it will act as a Cast target, meaning you should be able to cast to it from applications supporting Chromecast. There are exceptions to this such as with Netflix and the Foxtel Android TV ‘Puck’ which Netflix hasn’t certified for use on that hardware.

It should work fine for most circumstances, and most users I’ve spoken with are quite happy with it. Haven’t used it personally so I can’t add more than that.

Apparently the next update Oreo will work with the Google home.. When ever that will be..

No, they have a terrible record with updates to their shields, my shield portable is still v5.
They’ve completely abandoned their old product like it never existed..

The Shield TV was just updated to Oreo and I expect them to continue supporting it for a while if they are releasing it in new regions this long into it’s lifecycle.

My Shield Tablet was also pretty good with updates (although nvidia has now said there won’t be any more, or a new product)

Bought one a couple of months ago from the US… Best Android TV box ever… And I’ve owned a few over the years..

I’ve wanted a shield tv since they launched. However I don’t feel inclined to support NVIDIA given it’s taken them 5 years to support our market.

More importantly why are they bringing an essentially 5 year old device to our market now???
Are there plans of a refresh happening sooner rather than later.

I think purchasing one at the moment could leave a lot of Aussies with an out of date device.

It was released in May 2015 so I’m not sure where you get 5 years from. It’s the current version of the device (released last year) so i would not describe it as an “out of date device” either.

The maxwell architecture which the shield tv uses was first released to consumers in early 2014 making the hardware essentially 4 and a half years old.

If Nvidia release a new shield tv based on upgraded maxwell hardware (which the refresh DID NOT DO) or based on a completely different architecture, e.g. the newer pascal architecture, then people who have a current shield tv will have an out of date device.

I have been using the NVIDIA SHIELD TV for the last two years. I have both 2015 and 2017 versions which I bought from Amazon US. I bought them on sale so I picked up the 2017 version for only $169.99 US.. They are both 4K HDR.. They are amazing.. I wouldn’t use any other device for streaming Netflix and other programs.. Lots of games too but I don’t play video games so I mainly use them for streaming.. They also have Google Cast built in and voice assistant works great as well..

NVIDIA Shield console is the best device I’ve ever purchased. Great to see more people will be able to experience it soon.

I was about to bite the bullet last night, $299 from Amazon US, Ill wait now for local release! Thanks Ausdroid.

I bought one from Amazon US like two weeks ago! If only I knew this was going to happen.. or maybe my purchase tipped them to finally bring it here 🙂

Or your purchase was cheaper than thelocal market anyway..
Its not like harvey norman does a sale like EB games here…