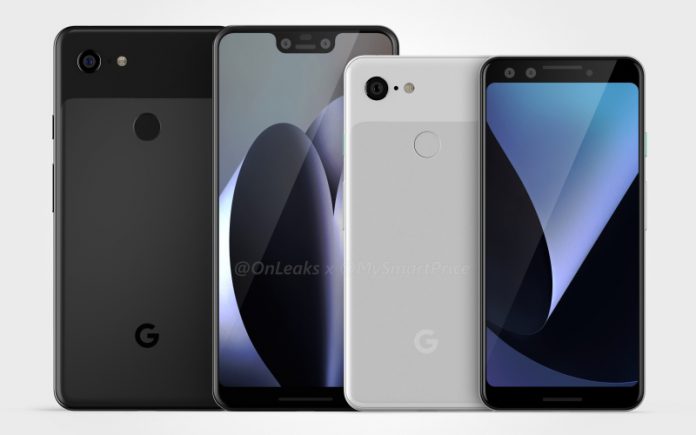 We can’t get enough of Pixel leaks, and with the TPU cases for the phones now available for purchase it was inevitable that CAD renders of the phones would appear – and today is the day.

The CAD renders come courtesy of Steve Hemmerstoffer through his @onleaks Twitter account and a partnership with MySmartPrice who’ve published high resolution images and a 360-degree video of both the Pixel 3 and Pixel 3 XL on their site. Interestingly the renders do show a dual front camera on the Pixel 3 as well which is an interesting twist, though the site does admit this could simply be an ambient light sensor. According to these renders, the phones will also incorporate stereo front-facing speakers – a must have item for a number of smartphone users.

There is some controversy about the rear of the phones with MySmartPrice talking about a metal rear despite previous leaks talking about a glass rear. The glass shade at the top is something that all parties agree on though.

As we’ve seen previously, the base of the phone will house the USB-C port and the SIM tray. In terms of button layout there’s no change from the Pixel 2 phones with the power button sitting above the volume rocker on the right hand side of the phone.

In terms of when we’ll see these phones announced there’s no official word yet but we’ve seen the past couple of Made by Google launches on October 4th. Whether Google sticks to this date, which falls on a Thursday this year, or changes it up is something we’ll have to wait and see.

If you want to see more of the Pixel 3/Pixel 3 XL CAD renders you can head over to MySmartPrice to check them out.

ill be waiting for pixel 4, more than happy with my pixel 2 xl, if i did not have it though, i would be getting the smaller pixel 3, not a fan of notches, even though technically you could probably hide the notch with software and with the screen being oled, it would be hard to see the notch.

The notch is fine but why the thick chin as well?

The notch is just marketing stuffs for people to talk about, to create a sense of something new. If not for the best algorithm from camera, unlimited photos storage and clean Android, I wont buy my pixel xl 2. Sometimes I feel ambivalent about this, Google was so niche that no other brand could match those features, but I know I paid a lump sump for this phone just because of them. The same apply for px3

I don’t get the decision behind the notch. Honestly I’d prefer slight bezzels than that fugly notch. It’s like having a permanent floater in the eyeball except magnified 100x. I love the pixel 2 xl for the reason it doesn’t have that God aweful notch. If the v3 has it I’ll definately NOT be upgrading.

I know some people absolutely detest it, but the notch design is growing on me.

I’ll see what the final devices are like and decide from there. Both the 3 and 3 XL look like compelling devices.

Can we use a wallpaper with a black strip at the top so the notch is less noticeable?

I believe (i.e. don’t take my word for it) that there may be an option for the screen to start below the notch.