To say that the Australian public’s confidence in the banking sector and especially the big 4 is at an all-time low is a massive understatement. After the underhanded wrong-doings that have been unearthed by the banking Royal Commission this should come as no surprise. This would make it a good time for a new player to step up and it seems one has with the announcement of Australia’s first all-digital bank yesterday.

The new bank, 86 400 (that is pronounced eighty-six, four-hundred — the number of seconds in a day), has been working behind the scenes for the last two years, “stealthily” preparing for this launch. Over the two years they have been investing in “proprietary technology to build a more efficient, digital bank.”

Australians deserve more from banking. They expect better treatment and a better experience, and that’s exactly what we’re here to provide. 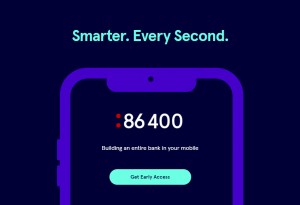 While the idea of a start-up bank may scare off a few it is not starting out with Kickstarter money. With backing and full funding from Cuscal, Australia’s largest independent provider of end-to-end payment solutions but they are looking to raise more than $250 million of capital over the first three years of operation with more shareholders coming onboard.

86 400 has been set up and funded by Cuscal, as a separate entity, with a separate board, and completely separate team. We’ve backed 86 400 because nobody in Australia is leveraging all of the capabilities available to maximise the banking experience on your mobile.Craig Kennedy, Cuscal MD

With an all-digital bank the overheads are obviously a lot less and with so many of us now doing all our banking and payments online 86 400 are promising to provide “better value products for customers” and disturbingly (because this is what led to the Big 4 screwing over so many customers) “better returns for our investors”. They do state that they believe “profit is a by-product of doing something great for the customer” – hopefully their investors see it that way too.

In order to compete with the big banks, we not only need to offer the full range of services, but we also need to do things differently. 86 400 will have a beautiful, intuitive app… The crucial thing is the interplay between the core banking ledger and the technology. The technology has to work with the ledger, not for it. Only then will customers have a bank that’s working for them. That’s exactly what we’re building.Robert Bell, 86 400 CEO

86 400 gets more interesting in the payment options it is going to provide. For too long we have heard that XYZ bank only supports XYZ cardless payment methods on XYZ cards. 86 400 though say that they will allow any pay, anytime with an option to use a Visa Debit Card, Apple Pay, Google Pay, Samsung Pay, Pay ID and more. Upon launch there will be both an Android and an iOS app. We welcome the idea of a whole new bank for Australians, one that is focused on us, and especially one that is focused on mobile technology. The Big 4 have failed us but in saying that we do recommend you tread carefully with any new (or old) financial institution, even with a full banking licence and APRA (Australian Prudential Regulation Authority) approval (both expected soon).

Launching in Beta late this year and intending to launch to the public in the first quarter of 2019 you can get in early by heading to their website and signing up for early access. Early offerings will only be transaction and savings accounts but more services will be added over time.

Hold on a sec! Isn’t ubank all digital as well?

Yep but not the same as this…Ubank is very restricted in payment options. After all, it is owned by one the big banks 🙁

Well these guys have obviously not heard of ING.

LOL. Not the same. You need to read more about this new bank