The launch of Android P is getting closer with the release this morning of Android P Beta 3 (Developer Preview 4).

The update is very close to the final release coming ‘later this summer’ says Android VP of Engineering, Dave Burke in the blog post announcing the release. The release includes the July security patch, as well as ‘the latest bug fixes and optimizations for stability and polish’.

There’s not a lot of features announced in the release, though there will surely be some included, like the expected switch for a ‘Dark’ theme in the Pixel launcher that Google advised would be launching soon. 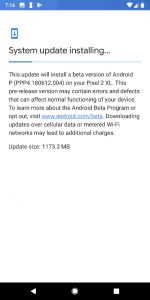 For anyone interested in learning more, the Android engineering team will be hosting an AMA (Ask Me Anything) on July 19 from 11:30am-1:00pm (Pacific Time), that’s 4:30am-6:00am AEST on Friday 20th July for us here in Australia over on the r/androiddev subreddit to answer your technical questions about Android P. They’ll also be making an announcement (Ooooh!) on the subreddit in ‘the coming weeks’.