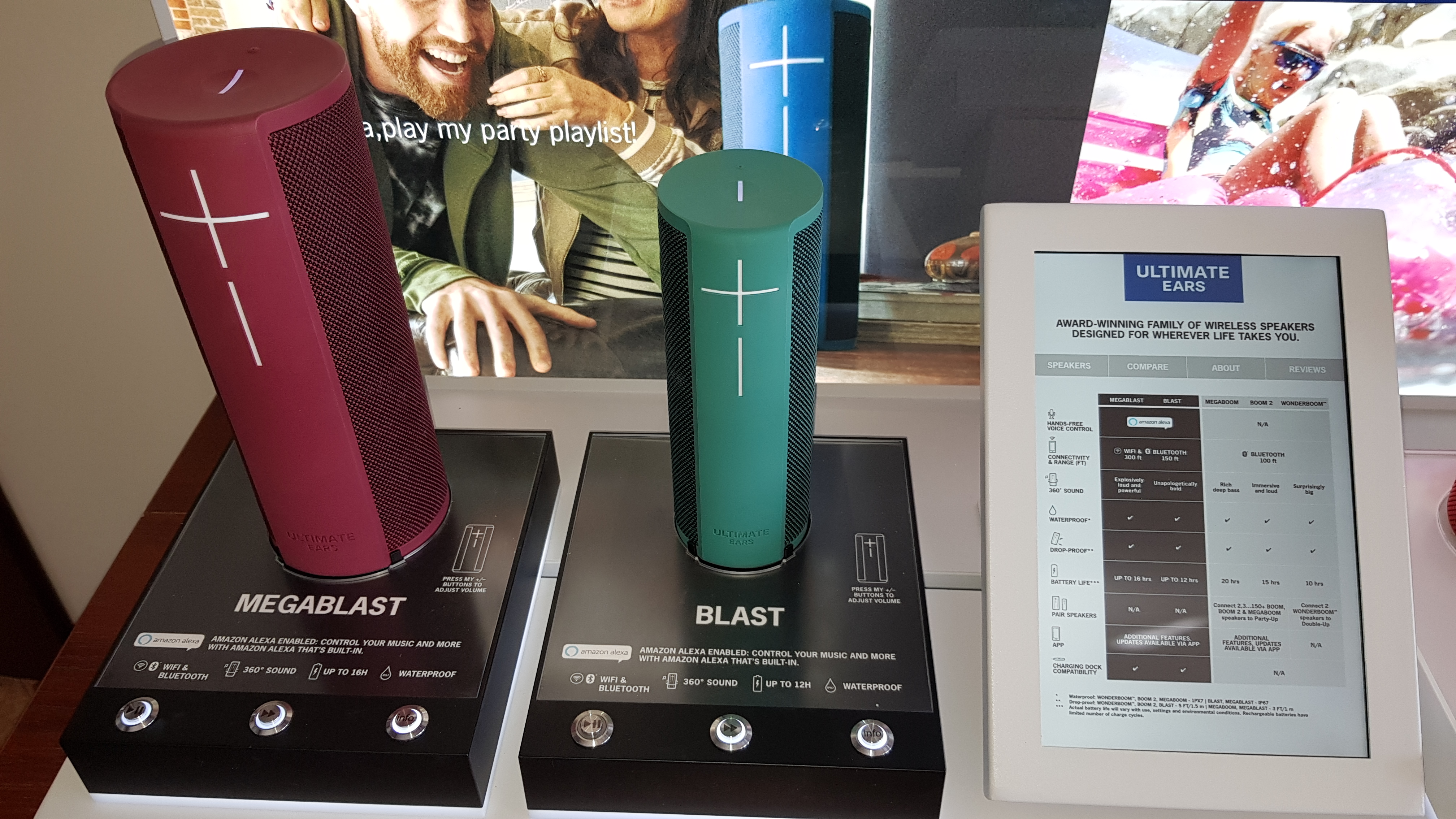 Logitech’s Ultimate Ears new Megablast is indisputably the largest and loudest in their range of portable Bluetooth speakers. While it does add Alexa voice commands and charging dock functionality it also loses some of the features that are present in it’s smaller siblings the Megaboom and Boom 2. At 1.2kg the Megablast is 27% heavier than the Megaboom, which was previously the largest portable speaker in the UE range.

Inside the box you’ll find a Quick start guide, Micro USB cable, power supply, D Ring and of course the Megablast itself. Note that UE speaker charging ports are designed so you have to use their charging cable, other cables won’t fit in the available space.

If you buy the additional accessory Power Up that let’s you keep the Megablast on all the time, in return for your $50 you’ll find inside the box the charging pad and a charging D-Ring. The Power Up doesn’t give you a separate charger or cable, you have to use the ones that came with the Megablast. You need to replace the standard D Ring with the Power Up’s ring for the Power Up to work with a Megablast or Blast.

In the long term I suspect that keeping the Megablast/Blast on the Power Up charger all the time will kill the battery faster than if you recharge only when the charge is low. All rechargeable device batteries “like” to discharge and recharge rather than being topped up all the time. UE pointed out in tiny text on one of their launch event displays: “Rechargeable devices have a limited number of charge cycles”.

Since it’s supposed to be a outdoors device I chose a tennis ball as the size comparison between the UE Megablast and a UE Boom 2.

Like all UE speakers the Megaboom needs to be setup using your phone/tablet with an app. It would be a lot easier to deal with UE speakers if there was just one app, instead of several different apps for different models of their speakers. This is quite confusing for a lot of buyers, as evidenced by the comments on various UE Speaker apps in the Google Play Store. 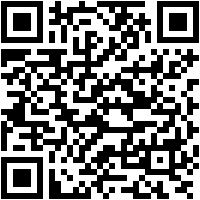 I turned the Megablast on and a voice from it said “hi there please download the Ultimate Ears app on your mobile device to set up this speaker”. I did that and opened the app which prompted me to pair with the Megablast via Bluetooth. No problems there.

The app asks for device location access and then connects to the Megablast. Once you’ve connected to Wi-Fi (required to use the Alexa functionality), the app checks for updates to the speaker software and downloads it. This took several attempts until the update worked. Future updates are supposed to be automatic.

You’ll be prompted to connect to your Amazon account to enable the UE Megablast’s Alexa voice command functionality. Note that a UE spokesperson at their launch event said that the UE Megablast and UE Blast won’t get the Google Assistant as well, it’s an Alexa device only.

If you’re unfamiliar with the Alexa app and setup process it’s detailed in the screenshots below.

Some of the more interesting points are the music services Alexa can interface with: Amazon Music, Spotify, iHeartRadio and TuneIn.

Amazon Music integration is expected since Alexa is an Amazon service. They aren’t ever likely to integrate voice commands for Google Play Music unless Google reciprocates on their Home devices.

It’s possible for you to link your calendar to Alexa so you can ask voice queries about it and it’s also possible to enable Amazon purchasing by voice I disabled both because Alexa only allows one account to be registered per device, unlike Google home devices that can register up to 6 people’s accounts and recognise their voices separately.

The day after setting up the Megablast I turned it on in the morning to be greeted with “I’m having trouble connecting to the internet”. Turning it on and off several times didn’t work. I had to factory reset the Megablast by pressing power and the – button for 6 seconds, remove the speaker from the UE app, set it up again, then it decided to work.

Considering that the Megablast and Blast were announced overseas over 6 months ago it is puzzling that there are still so many features missing in the Megablast/Blast which the Megaboom has eg: Party UP to connect multiple speakers together, remote power on and off via the app, Tap Controls and being able to use it as a Speakerphone for phone calls.

UE say that they have added app Volume control and EQ to the Megablast and Blast since launch. Remote On/Off will follow soon. Grouping will be supported later this year, but works differently than Party-Up. Megablast and Blast will only group with each other, not other Ultimate Ears speakers.

The Megablast’s Alexa voice command features work while you’re within range of a saved Wi-Fi network so if you take this speaker to the beach it’s going to be Bluetooth only. UE support says it will only connect to simple home Wi-Fi style networks, not corporate or university style Wi-Fi that uses “username/password” type logons.

The setup glitches and missing software features that should’ve been available at launch detract from the Megablast’s undeniable position as the best sounding and most robust Alexa powered portable speaker.

I like listening to podcasts while I do household tasks and could easily hear shows like The Bugle podcast while in different rooms of my apartment home. Testing out the Megablast’s Alexa voice command functionality, I wasn’t impressed by the Megablast’s far field microphones which claim to pickup your voice from far away. Testing showed that the Megablast mics were much less sensitive than my Amazon Echo Dot and the Megablast takes about 2.5 seconds longer to respond in comparison.

The Megablast would be great as a bathroom speaker. It has continued to work fine during the last few weeks playing SBS Chill radio, despite room humidity reaching a peak of 90% while showering. Megablast is IP67 waterproof and dustproof so can be immersed in liquid up to 1m for up to 30 minutes.

You can easily get a Amazon Music trial full account for a few months free or $0.99 depending on the current promotion. I found that it had all the songs in my Google Play Music likes playlist.

Speaking of music the Megablast plays it via two 25mm tweeters, two 55mm active drivers and two 85mm x 50mm passive radiators. It has the ability to clearly play low and high notes clearly and you can hear different instruments playing during non vocal tracks.

The maximum sound level of 93dB sounds distorted and too loud for my comfort. That distortion, living in an apartment block where you should be polite to neighbours and the fact that extended exposure to loud music damages ears meant I mostly used the Megablast at 50% volume.

I agree with Dan’s Echo review, Google powered speakers have the edge in Search and queries related to data it knows about me. Also if you have a Google Play Music subscription that you want to use voice commands with you’d be better off with a Google assistant speaker.

Alexa’s variety of skills are amazing plus they’re easier to find than Google Assistant apps. If you subscribe to Audible books and Amazon Music then an Alexa Speaker is better since Audible doesn’t support Chromecast. Alexa has built-in commands to play books from your Audible library.

A lot fewer Australians would have an Amazon Music subscription since it hasn’t been available here for long. Over time this may change, there’s a 90 day free trial available and many Australians might start using now that Amazon Prime launches in Australia. If you do subscribe to Amazon Music it’s Android app does allows chrome casting as well as voice playback on Alexa speakers. Note that Amazon nudges people into buying it’s own Echo speakers because Amazon Music has a much cheaper plan $4.99/month for these.

Considering that the retail price of a UE Megaboom today at JB HI-FI is $379 and the UE Megaboom costs $229, you could buy a Megaboom and an Amazon Echo Dot at one of the regular sales for about $270-$280 total, saving about $100 in comparison.

When you want to use it outside or around the house you’ll have a very capable UE portable speaker in the Megaboom that has stable fully functioning software and weighs much less than the Megablast. It’s very easy to pair an Echo Dot with a bigger Bluetooth speaker to output the audio from that or since the Megaboom has a AUX socket you can plug the Echo Dot in directly via an audio cable which saves the portable speaker battery life.

What about the new UE Blast which retails for about $279 you ask? I still think the combination of a Echo Dot and a Megaboom would be better. The Blast has the same software issues as the Megablast as well as only 12 hours battery life vs the Megaboom’s 20 hours.