It has been rumoured a lot lately and was finally made official yesterday: the Microsoft Surface Go — and it looks like a possible competitor for Google’s Chromebook ecosystem.

One of the problems with Microsoft Surface devices in the past has been that they were cost inhibitive but the Surface Go looks to solve this problem. Starting at just AUD$599 and available for preorder from today the Surface Go promises to be a great device for people on the go who want a relatively cheap, small and lightweight device that is easy to carry around.

The Surface Go has a 10 inch display, is just 8.3mm thin and weighs just 520 grams. The all-important CPU is the 7th Generation Intel Pentium Gold Processor 4415Y and offers up to nine hours of battery life. In this version of the Surface there is no fan but there is still a PixelSense Display (1800 x 1200 pixel resolution in a 3:2 aspect ratio) which is compatible with the Surface Pen.

Within the tablet there is a kickstand as per the Surface Pro models, a Surface Connect port, a USB-C 3.1 port, a headphone jack and a MicroSD card slot for memory expansion. Microsoft have included the Windows Hello camera which works amazingly on previous Surface Pro versions, even in near darkness. It runs Windows 10 in S mode which can be upgraded to Windows 10 at no cost – but the switch is one way – you cannot go back to S mode.

So while the low end tablet portion of the Surface Go is relatively cheap, to be able to use it as a laptop on the go and as designed you will need to fork out another $199 for the keyboard cover and then another $139 for the Surface Pen (which I love and use all the time on my SP4). For those who struggle with addition, that is north of $900 for a bottom of the range device. Sure it’s cheaper than a Surface Pro but it is more expensive than most all Chromebooks. For this reason we do not feel that the Surface Go is designed to go up against Chromebooks but instead the iPad Pro. 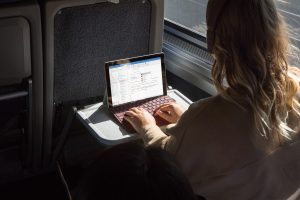 As for Australia though we do not see many Chromebooks make it into our stores so for many people it will be a viable option. The form factor is a winner for most people with it’s use as a tablet great for students reading text books or journal articles. If a manufacturer were to bring one of their better Chromebooks into Australia, detachable or 2-in-1, then there would be competition in that price range for it but the way our landscape currently sits there is very little competition. The size of the Surface Go does make it super portable but try using that kickstand and keyboard on your lap and you will struggle for sure (based on our Surface Pro use).

Pre-orders are available today with shipping expected in mid-August. We cannot wait to test it out and see how it compares to our Chromebooks and regular laptops.

Anyone here have a use for a Surface Go? What would you buy if looking for a portable computer in this price range?

I want a chrome tablet. 🙁

The problem remains that it is Windows. You can create incredible hardware and offer for dirt but if it is still Windows it is not going to sell. PC sales are at 10 year lows and Google shared a 50% increase in Chromebooks sales YoY. That is NOT because of hardware but because of software.

The UX with ChromeOS is just far, far, far better then Windows.

That’s not a problem it’s a feature. You are getting a full OS with the biggest software market.

Chromebooks are starting to make a dent, but PC sales still dwarf them.

I have pre-ordered the base model. I will be using it 90% of the time for watching streaming services in bed. That built in stand is priceless, no more leaning a tablet against a pillow. Happy days.

If Amazon ever got their finger out, the Fire HD 10 at US$149 currently (often $110-120) is a more realistically affordable option for media consumption.

I was tempted to have it replace my SP4, but the “add-ons” really do add on; to the price. Was going to get the increased model, which is basically more RAM and HDD with the same processor, but it’s $839; that’s a big jump up from the $599 model.

The hardware is beautiful. If only a ChromeOS tablet (+ book cover keyboard) existed that looked this good.

looks like a genuinely interesting product, an alternative to an iPad and the Apple overlord in many regards, ideal for email, web browsing a spot of Netflix and marking up some documents.

It will get the usual – doesn’t have 3 Trillion apps blah blah blah from the fanboys but who cares.

Even at $900’odd bucks I think this will be a winner in our market. A full featured Windows Tablet direct from Microsoft for $599 will get peoples attention I think and then the keyboard\pen get purchased later.

Second generation will get better and cheaper and the user base grows and the accessories become less of an issue as you’ve got the pen and keyboard (assuming the 1st gen. fits) already.

Now all Microsoft need is a phone and a wearable!