Fitness tracking bands are great in helping people be more active and this is very important given our obesity epidemic. Although around 30 percent of Australian adults are obese, obesity is not just an adult issue. Childhood obesity is also at record levels with 25.8 percent (1.2 million) of Australian children (aged 2-17) overweight or obese in 2014-2015.

Fitbit is not only looking to tap into this niche market, but also to help kids become more active so that fitness and health becomes a way of life for them. The new fitband from Fitbit designed for kids for this reason is the Fitbit Ace. 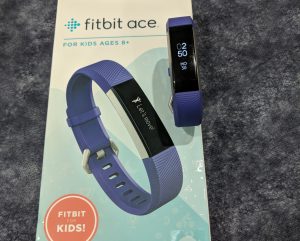 What is a Fitbit Ace?

It’s I’m2018 and our kids are spending more and more time seated in front of screens and less time moving than they should (I am as guilty of this as most). The Fitbit Ace is designed to “make fitness fun for kids” by not just tracking the child’s movement and activity but also setting goals and challenges for them and rewarding their successes.

The Fitbit Ace is basically a child’s Fitbit Alta — it looks extremely similar and functions very similarly, just has a smaller band. The band might be smaller, but the display is the same size.

*Editors note* From here on, the review has been written by the author listed above. Why would we, as adults, review a product designed for kids? There is no point telling the kids they should use something if they dislike it and thus refuse to use it.

Hardware: What is it and is it comfortable?

The band is tough and rubbery with striped details on it. I absolutely loved the band I thought the style was nice and simple without being too plain. I actually got a couple of comments from my friends saying they liked the band too. The band is not too childish like some fitbands aimed at children so even older kids can wear this.

It is quite comfortable to wear due to the adjustable lengths. However when sleeping on your wrist it can get a bit uncomfortable at times, but most of the time sleeping with it on is pretty comfortable — it depends if you sleep with your arm under your body, squashing the Ace into your wrist.

*Editors note* The Ace fit the 12yo wrist relatively well, with it sitting on the fourth last notch. While Georgia may be just within their targeted age group she is a is petite girl so the band fit her with room to spare — YMMV. A Fitbit Alta band can easily be purchased and installed onto the Ace — they have the same size display and band width for those who want to keep their Ace longer rather than upgrading.

What about the display?

The display is an 128 x 36 pixel resolution OLED display and while it is not a touch screen it will respond to taps. As with other Fitbits the display is can be turned on with a flick of the wrist; however, you will need to remind the child that there is a split second delay before the display lights up as kids can be impatient.

It is also quite easy to see the screen in bright daylight and at night it is also not too bright or sensitive so it can be worn at night without interrupting my sleep.

Is the software suitable for kids?

Before doing anything my Dad needed to set up a family account attached to his personal Fitbit account (*Editors note: which was easy but a little time consuming). After creation of the account we were able to enter my details into the Family Account. The Fitbit Ace can only be attached to a family account and not a personal account.

We then installed the Fitbit app on my LG G6, Dad logged into his account and I was then able to navigate around the app. The Fitbit Ace app is quite easy to use. The functions the Ace is able to perform is less than that for an adult Fitbit device but you are able to track sleep, steps, and how much exercise you have done. It is pretty basic with the things it can do but in the end it is a children’s watch so it does not need to be, and should not be, complicated.

The watch can be set to provide reminders to kids to move which I did and found it to be very effective at reminding me to get up and do something. It would flash up on the display as “Go go!” and scroll across until I got up and moved a few steps. The app can also be used to set goals for the kid which can make finishing the goals and challenges fun.

Does it need to be charged often?

The battery life on the Fitbit Ace was great. I charged it up when I was at Dad’s on the Friday night, and it did not run out of battery until Wednesday. I liked that the charge can be monitored on the app and on the Fitbit.

The charger is a USB clip which can be a bit fidly to use when charging the Fitbit but it was easier to charge than the Gear Fit 2 I used to have. After plugging it in it only took an hour or two to charge fully.

Would other kids enjoy this and should their parents buy it for them?

The Fitbit Ace is a fun watch that looks good so a lot of kids will like it. I think it is great watch for kids because kids don’t really need complicated fitbands and just want to track their movement and sleep. It is sized well for kids and the design allows it look the same as the adult Fitbits without silly cartoon characters all over them.

I think the parents should buy it for their kids if they are looking for a watch with some basic tracking and to help the kids get moving. The Fitbit Ace can be fun with the goals and challenges encouraging kids to get up and moving more.

All in all the Fitbit Ace for kids works well and is a simple watch that looks good and I would recommend it for any other kid.

The Fitbit Ace is available at the Fitbit website and all your usual retails for RRP$99.95 and is available in Power Purple and Electric Blue colours.