I’m pretty well known as a Google fan. I’ve bought everything they’ve ever produced under their branding including Nexus, Pixel, Chrome OS devices and when Google branched into smart speakers in 2016 – I just knew I had to get one, then two and finally three.

When Google Home Mini was announced alongside the Google Home Max at the ‘Made by Google’ event in October last year – it was inevitable that there would be a few of these on-hand. There’s now a Home Mini in almost every room of my house – Laundry and Bathroom don’t count.

The Google Home and Home Mini are great for accessing Google Assistant with your voice, and we’ve seen that consistently with the reviews of those devices.

Where they’ve been a bit lacking though is as good speakers for listening to music.

The Google Home Max goes on-sale today through the Google Store, The Good Guys, Officeworks, Harvey Norman, David Jones and JB Hi-Fi. It sells for $549 – not cheap by any stretch of the imagination.

Google let me loose with a Google Home Max last week, and it’s time to see if the product justifies that $549 price tag.

What is it? What’s inside it? And What does it look like?

The Google Home Max is the biggest smart speaker in the Google Home line so far. The Home speakers are the physical embodiment of Google Assistant, so you can ask it questions, control over 5,000 different types of smart home device and of course play music.

The heft and size house a fair amount of hardware which Google says they custom sourced and designed every part of. The internals consist of two 4.5-inch high-excursion woofers and two 0.7-inch tweeters which Google says is 20 times louder than Google Home, we’ll get to that test in a minute. Google has also carefully thought out even details like the fabric which covers the front of the speaker which they say is acoustically transparent.

The mesh hides away four multi-coloured LEDs which light up white when it hears you call on it, orange when it’s muted (you can physically mute the Home Max with a button on the rear) or multi-coloured when it boots up.

There’s no logos on the mesh, nor anywhere else on the Home Max. Design wise, it’s understated, letting the power and clarity of the sound it produces do the talking. Google has even made the controls – a touch sensitive strip that’s on the side or top of the speaker – transparent marked only by a small line and denoted only by a removable sticker attached to it when you take it out of the box which lets you know it’s there.

In short, the Home Max looks just like you think a speaker should, it’s the right shape and I wouldn’t have been surprised if I’d been told a major speaker manufacturer was involved in the design, but that’s not the case. It can be either Charcoal or Chalk in colour, and it looks great in both.

You can sit Home Max on its side horizontally, or on one end vertically…and it looks pretty good either way. It’s worth noting that the vertical orientation puts the Home Max into mono because it’s actually meant to be used in this orientation only if you have a second Home Max to pair it into stereo mode.

Google includes a magnetic rubberised pad with the Home Max to sit it on. It serves the purpose of acoustically isolating the speaker from any surface you put it on.

Home Max supports a number of options to play music. You can obviously use it as a ‘Cast’ target from a number of services such as Spotify, Google Play Music/YouTube Music and loads more. You can also use the Google Home app to set it up as a Bluetooth speaker. If you really want to go old-school you can connect to it using the 3.5mm auxiliary jack on the back.

Aside from the power input and auxiliary jack, there’s a USB-C connector on the rear too. It can be used to either plug in an ethernet adapter via USB-C converter, or as a charging port for a USB-C device.

With the hardware that Google has included, I can conclusively say that Google Home Max is LOUD.

The lowest volume settings are more than enough to keep me going in my townhouse. Max is positioned next to the TV in sort of a vague hope that one day it could be the start of a Google powered surround sound system for my home-theatre – something that’s not looking likely according to Google.

Bumping the volume up to halfway was almost over-powering. It’s loud, but it’s also great quality.

The sound from Home Max is clean with not too much bass, and offers crystal clear mid-range sound and enticing high-end without overpowering you. That said, the more you pump the volume up, the more bass seems to kick in. It’s so good you can listen to some lossless tracks and easily discern background tones and notes you may not have noticed before.

For a bit of fun, you can of course issue the command of ‘Hey Google, play

You’re then also left with the problem that you mightn’t hear anything ever again, either.

Google Home Max of course includes a far-field mic array designed to hear you when you speak, but crank the music too loud and it will be unable to hear you over its output. Not unreasonable, but something to note. All you have to do is hit the touch panel and silence it.

Those far-field mics are also used for tuning the speaker with something Google calls ‘Smart Sound’. Google says that the Home Max will automatically tune itself by using the microphones to build a model of the environment which can then tune the sound using a range of custom EQ settings. You can modify some sound in the Google Home app, including bass and treble using a slider – but the Smart Sound will apparently really go all out. 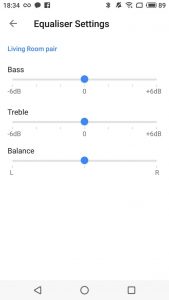 In terms of sound – there’s one last trick that Google Home Max has up its sleeve but you’ll need to open your wallet to experience it: Paired Stereo Mode.

Google Home Max can also pair to another Google Home Max speaker for stereo sound. To get the effect, you’ll need to turn Home Max to vertical – at which point it goes to Mono mode. Pair the two Home Max’s into Stereo Mode in the Google Home app and then you can cast audio to the paired speakers.

If you thought Google Home Max was loud on its own, be prepared: in Paired Stereo mode, it’s a weapon. The all-encompassing sound of Google Home Max in stereo mode is something to behold, it loses none of the clarity and quality of sound, it’s just more of that goodness and from stereo source with Google recommending you situate the speakers at least 10 feet apart. For a smaller house or apartment, a Google Home Max may actually be too big a sound to justify the price. It’s like purchasing a Ferrari but never unleashing the beast by simply driving it to the corner store every Sunday.

For a larger home, though, Google Home Max is absolutely worth it to fill an area with sound. In a party setting the speaker, with that great sound and access to all the streaming services is a fantastic idea.

I’m by no means an audio snob, I have a decent Sony surround sound system at home and Home Max will be replacing it for music.

True, $549 is a lot to ask, but it’s a lot of speaker and a lot of smarts that you get included. I’ve had the pleasure of listening to a number of speakers and I have no hesitation in saying Google Home Max is one of the best you’ll find.

Think I’m in. I will be using it in a fairly small space though, so for now my only big worry is that it’ll ever for some reason go above 50% volume and obliterate me. Hopefully there’s no reason it’d ever accidentally do that!

Nice work Daniel. If you like your music then the home doesn’t cut it, you need the max to give good sound at low levels, the cost isn’t high if you compare it to a bigger system that needs multiple speakers, subwoofer, amp and more just to sound as good.