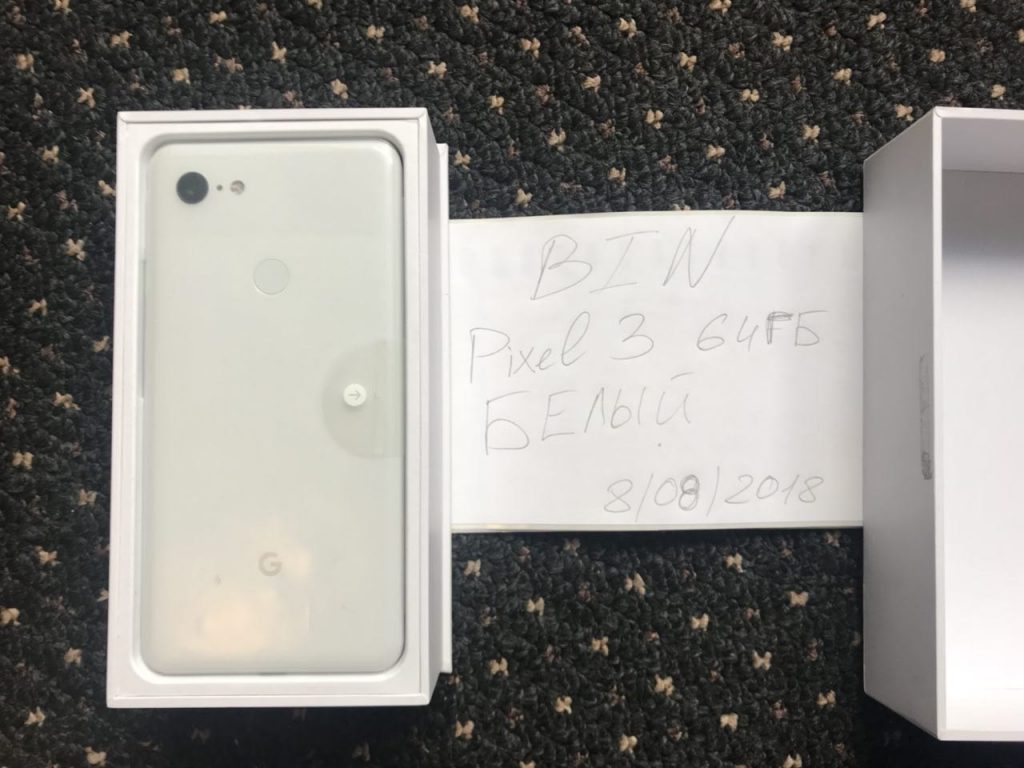 Google’s launch of the Pixel 3 phones is leaking worse than a Samsung launch at this stage, with a retail box containing a ‘Clearly White’ coloured handset leaking overnight.

The handset was shared by Ukrainian tech blogger, Канал Лучкова, on his Telegram channel and shows what he calls a ‘pre-release version’ of the handset. The pictures and subsequent video of the handset show a Pixel 3 XL handset running Android 9 with an octa-core Qualcomm processor which we’re betting is a Snapdragon 845 with an Adreno 630 GPU with 4GB of RAM. The display – no size listed – has a resolution of 1440×2960 (shakes fist at notch) with a pixel density of 494pixels per inch.

As well as confirming the notch and showing off the rear of the phone again, the pictures also show that Google has again gone for a colour accent on the power button. Instead of the brighter Orange on the Pixel 2, Google has gone for a more subtle green. Inside the box is the biggest surprise, with Google including a pair of earbuds with a USB Type-C connector. The earbuds have a very Pixelbuds like look to them with what appears to be an adjustable loop coming out of them. Also included is the USB-C to 3.5mm adapter, USB-C to USB-A connector for transferring files and of course a USB cable and presumably a power brick. If all that isn’t enough, the source has also shared an unboxing video:

The Pixel 3 – and whatever other Goodies Google has to share – is set to be announced at Google’s next ‘Made by Google’ event rumoured to take place on October 4th. Clearly White is looking pretty good, but Google has never been content to simply have one colour, so we can’t wait to see what else they have.

I live in the northwest and don’t have a choice except Telstra. With that in mind they’re getting better (they couldn’t get worse surely). I have to know is it worth upgrading my 2 to a 3 or wait for the next one. I’m having issues with Bluetooth headsets connecting amongst other things

You’re not alone. A number of people have issues with Bluetooth. I’ve never personally experienced it and I use Bluetooth earphones sometimes all day – but it’d definitely a thing. Hopefully the Bluetooth stack is improved on this and in Android 9

That notch is even worse than iPhone X, Apple has designed the best acceptable phone face in the market. Without the fully optimised camera from Google, Pixel would never had a chance

And what about Huawei notch

With this leak is it confirmed to have the metal back? I was hoping for wireless charging

Still seems to be glass. Wireless charging isn’t off the table yet!

And why is wireless charging useful? Adds nearly $100 to the price $200 if you want a charging pad!! USELESS I tells ya!!

You can buy a perfectly good fast Qi 3 coil pad for $15-30 USD. Brand name isn’t always better, but if you want to walk into a store and buy Apple/Belkin be prepared to be stung in the wallet for it. Otherwise, there’s a lot of hyperbole in your post, guest.

Ohhh god that’s a ugly face! Why google why! Lmao 🤪 guess I’ll be keeping the pixel 2 xl for a few years.

I’m less concerned with the leaks than I am whether the phone will be available on-contract from any networks other than Telstra, which continues to be the thing stopping me having Pixel phones.

I’ve looked into it. Telstra has it for the foreseeable future. One of the dumbest decisions ever made.

Wtf were Google thinking with that notch. It’s horrible!

That notch is ugly. I hope that it can be masked in some way when the phone is in use.