Home News and Editorial The Huawei Mate 20 will have a tiny teardrop notch according to... Huawei are having a great year and even with their misadventures in the US are now the number two smartphone manufacturer in the world. Their P20 Pro was a massive success thanks to ground-breaking photographic quality but they need to follow up that success with another one to cement their position at number two.

The Huawei Mate 20 Pro is set to be Huawei’s next flagship and looks to pick up where the P20 Pro has left off. We have already seen leaks of its hardware details revealing that it will run their new HiSilicon Kirin 980 (expected to be announced at IFA 2018, just as the Kirin 970 was last year), house a 4,200 mAh battery with wireless charging, 6GB of RAM and 128GB of internal storage. The display is also expected to be a 6.3 inch AMOLED display with a notch.

Now we know how big the notch will be according to XDA developers. XDA Developers managed to get some hands on time with an engineering sample of the Mate 20 Pro and took photos of it. To protect the identity of their source they had renders of the phone based on the photos made up and they reveal a lot.

The render of the front of the phone show a relatively small teardrop-shaped notch with the earpiece located above it. There is a single camera within the notch but there does not appear any sensors within it. The sensors may possibly be located underneath the display or above it in the tiny bezels. 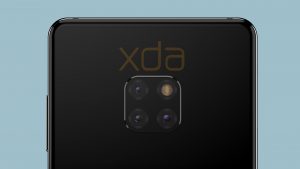 The rear of the device appears to house the triple camera setup, although it is located in a different setup than the P20 Pro. It is in the centre of the device — how or if this affects the quality of the imaging will be interesting but there must be a reason why Huawei have moved the cameras.

The top of the device demonstrates a headphone jack and the bottom houses the USB-C port, speaker and microphone. The phone apparently runs Huawei’s EMUI 9, based on Android 9.0 Pie.

We expect the phone to be announced October/November based on previous years’ announcements. After the success of the P20 Pro Huawei will be pulling out all stops to wow the world with their next flagship.

Will you be wowed? What will it take for you to consider this for your next phone? Do you like the shrinking of the notch?

It looks pretty good apart from the crappy notch , at least the notch is smallish .
I am looking at getting the galaxy note down the track , i don’t see that changing.
The mate would be my second choice though .

Now this is more like it. Enjoying my Mate 9 and this might be the next step up. Just wish it were easier to put LineageOS on it.

I don’t know about the camera software, but since the camera itself is a hardware component it’s drivers can either be reverse engineered or re implemented.

As for Chinese spyware, do you have anything to back that up or are you just looking for an excuse to dog whistle?