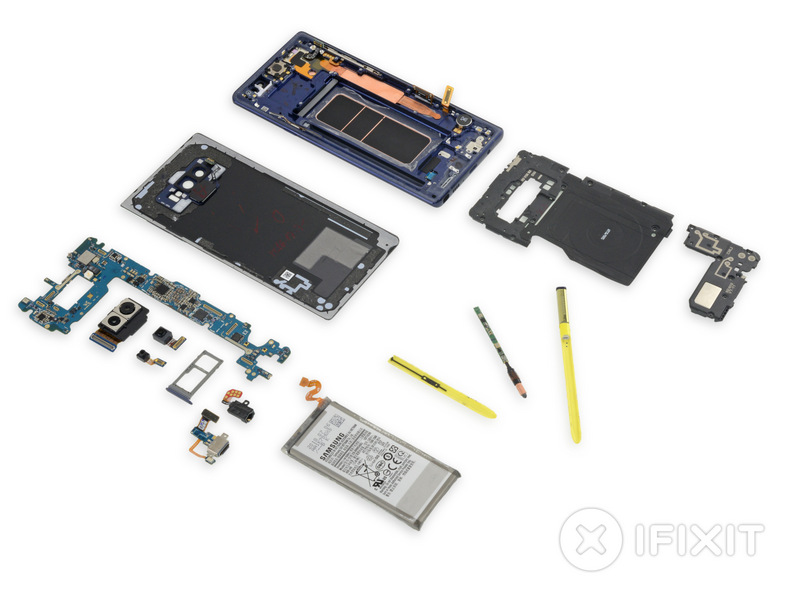 It’s almost a right of passage for of every major phone or gadget announced these days, the day when the iFixit team tear down the device and check out its innards. Today it’s the turn of the Samsung Galaxy Note 9 and its banana yellow S Pen.

The phone has scored the same as last years Galaxy Note 8 with a four out of ten for repairability, with iFixit citing the process of having to unglue and then re-glue the rear glass panel, and potential for cracking glass as major factors. To a lesser extent an excess of glue barriers also makes replacing the battery a chore.

On a positive note, the Note 9 uses modular components making it easy to change out components – once you’re inside. The phone also only uses standard Phillips screws to keep the phone together.

Of interest is the new Bluetooth enabled S Pen, which contains, as we now know, not a battery but a K8373 Seiko Instruments supercapacitor to power it for around 30 minutes. The iFixit team found no non-destructive way to open the S Pen, so it’s likely if it breaks on you, then you should definitely seek assistance from Samsung for a replacement.

It’s an interesting look inside the phone, and if you’d like to see more of this phone gore then you can head over to the iFixit teardown to check it out in full.